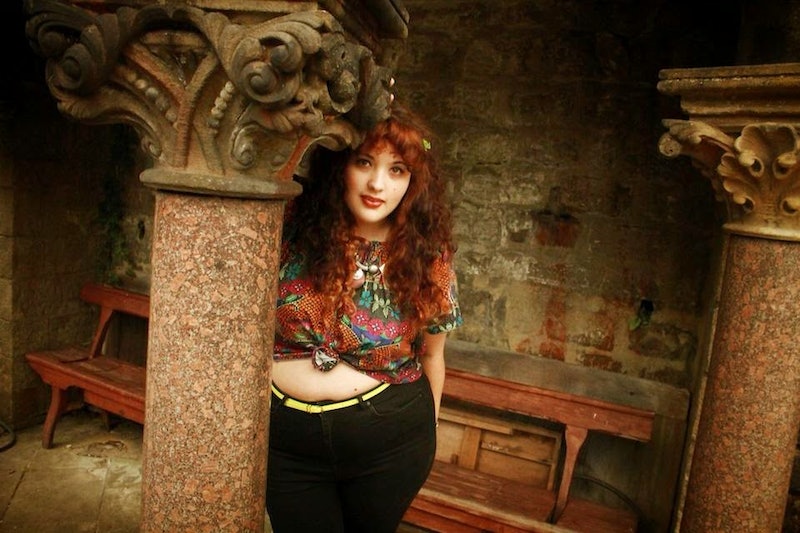 Whenever I say the words, "I am a fat woman," in the presence of the majority of my life acquaintances, I'm met by a few responses: "You're not fat; you're beautiful." "No you're not!" "Stop being so self-deprecating!" The thing about these responses is that they're founded in the belief that being fat is bad, and therefore anyone who says or believes that they are fat must really hate their bodies. When I say the word "fat," though, I don't mean it negatively. It's a descriptor. I have fat. I am fat. My tummy is fat. These are all true statements — and they aren't anything to fear. But because fat has become an insult, it still makes people uncomfortable when I use the word. And, I'll admit, I don't often use it IRL when describing other people's bodies, for fear of them or those around me taking serious offense. It's unsurprising, then, that we've come up with a ton of euphemisms for "fat" to avoid saying the word. And subsequently, that the retailers of the world have adopted these euphemisms.

Thus was born the term, "plus-size," I'm sure. It's the one I gravitate most toward, because I find it the most accurate in many ways. When we use "curvy," "voluptuous," or even "thick," we imply that women under a certain size can't possibly be these things — and we then end up with sayings like, "Real women have curves," or, "Bones are for the dogs; curves are for the men." And it all just gets very girl-on-girl hate-y for my tastes, and discriminatory in a whole other way. In an ideal world, we wouldn't need any differentiators, of course. All sizes would be sold by all shops and designers. We, as women over a size 12, wouldn't be limited to the small corner section of all the best department stores. But life's not like that. At least not yet.

If you ask me (and I know you didn't ask, but I'll tell ya anyway), the only way we're going to get to that place is to stop fearing fat. And maybe that starts with our fear of the word itself. In the meantime, let's look at some of the more bizarre, totally inexplicable words and phrases we've been using to get around the chunky truth.

This one can often be seen on pantyhose boxes and in the labels of lingerie. Perhaps it stems from the knowledge that once upon a time, royal families were rather fat. Hundreds of years ago, being a fat woman most likely meant that you came from wealth, and could therefore afford more food than most. But what does it actually mean? OK. I'd be lying if I said I don't sometimes feel like a voluptuous princess. But last time I checked, all women are queens — or at least deserve to feel like they are. Beyoncé proves this more than I ever could.

And what is this? Head to your local department store, and there it is. Women's section vs. ladies' section. Are thinner gals somehow less womanly? Are larger gals someone more worthy of their assigned gender? I just don't understand.

Is the Siberian husky a beautiful dog with an amazing, thick coat? Yes. Would I want one as a pet? Why not? Do I want to be referred to as one? Not so much. The "husky" category at clothing shops is mostly a thing of the past. But I still remember many a trip to Fashion Bug — during which I often left feeling like a dejected Eskimo. If you're trying to tell me I'm hefty, well, just say it. The euphemism isn't doing much.

The average American woman's size is approximately a 14. So in that respect, I suppose anything above a 14 would constitute "above average." But what this really means is, "Above what you'e supposed to be." And I don't appreciate the insinuation that there is a defined "normal" that I'm supposed to subscribe to. I'm going to keep being me, and that includes being the weight and size that I am. Thanks very much.

Loads of brands out there still use the term "Curvy" to refer to their plus-size section. But I really just can't cope with this euphemism. Time and time again, it implies that slender women just don't have curves. When in reality all women — all people — have some kind of curve to their figure. That might be the arch of their back, the crease that signals the start of an ass, or simply the shape of their face — but curves are always there. And we shouldn't assign them a size.

As a writer, I have a tendency to opt for flowery language here and there. I'm an adjectival person in my speech and in my thinking. I understand, then, the desire to come up with euphemisms on a literary level. But when it comes to issues of size acceptance and positive body diversity, I think we've gone too far. I think we need to first embrace the word we're so avoiding — that three-letter thing called fat — and go with it. And once we do that — once little girls never have to worry about being tormented in school for being chunky, because we'll have reached that level of human tolerance — then maybe we can start playing with words again. Until then, euphemisms: