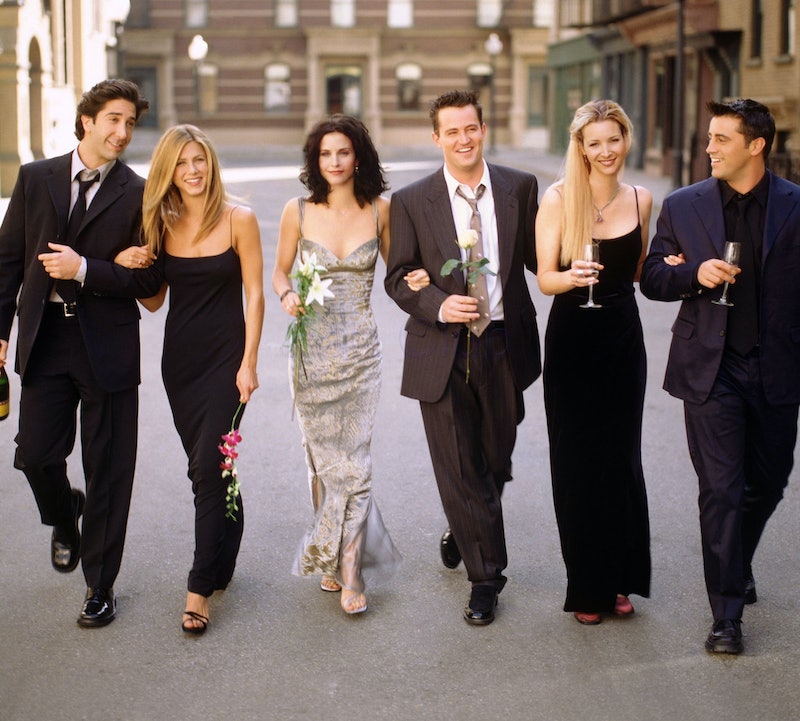 Whether you agree with its depiction of life as a twenty-something in New York City or find it laughably fallacious, most millennials would admit some measure of fondness for Friends. And thanks to the benevolence of Netflix, you can now relive the entire series without stealing the DVD box sets from your die-hard fan friends. The sitcom not only encapsulated the growing pains and grind of living in the one of the world's toughest cities from 1994 to 2004, it also provided commentary on a decade's worth of political and cultural phenomena. That, of course, includes all the amazing outfits on Friends that summed the entirety of that era's style.

Though you would be hard-pressed to find a lurking agenda behind the laughs, what is visible on second viewing is how each Friends season provides a perfect time capsule of its era — especially sartorially speaking. As the series grew more popular, the show's budget increased enough to foot the bill for six $22 million yearly salaries, but Marta Kauffman and David Crane knew better than to overshadow the show with branded designer merchandise or blatantly exorbitant wares. The duo hired Debra McGuire to oversee costume design on the series, and by golly did she nail each look. None of the characters sported the likes of Gucci boots or Chanel Boy bags throughout the series, a tight hold on reality which maintained the series' air of relatability — even when giant poking devices and holiday armadillos were a bit outside the realm of normality.

If you were a wee tot when the show first debuted in 1994 (or are just feeling nostalgic), read on for the definitive fashion guide to the trends seen on Friends. From mini skirts and booties to slip dresses and artful grunge, switching on an episode of Friends is the equivalent of cracking open a sartorial history book.

The Mid-Nineties: Tasteful Grunge And The Princess Diana Gown

Watching "The One Where Monica Gets A Roommate" 20 years after it debuted — yes, 20 — is akin to being slapped in the face with some of the '90s most notorious trends. Phoebe's rugged, bleached denim vest and oversized grey dress are sheer grunge, while Monica's overalls and menswear watch speak to the decade's interest in androgynous dressing. While not an everyday sartorial choice, Rachel's crumpled, off-the-shoulder wedding gown is part '80s couture and part Princess Diana, a combination many early-'90s brides personally relate to.

After outfitting Jennifer Aniston's fashion plate character in voluminous ensembles and moody colors for much of the first season, McGuire began to favor more body conscious looks for the ever-stylish Rachel. High-waisted Levi's and baby tees were the unofficial Season 2 uniform, with a helping of bell-shaped mini skirts and fitted sweaters thrown in for good measure.

The series shifted in a decidedly formal direction during the third season, when each of the six major players were gainfully employed in enviable positions. While Phoebe's ever-whimsical wardrobe remained wistful and playful, Rachel's once-casual wardrobe became more sophisticated and polished after the character's transition into the Bloomingdales' buying department. Of course, no season would be complete without several major fashion missteps, including Rachel's decision to wear a negligee as a slip dress. Minimalist skirt suits à la Calvin Klein appear on both Monica and Rachel over the course of the season, as well as the type of sun-faded prints and slip dresses that would have paired excellently with Doc Martens. Truthfully, doesn't every woman in her mid-twenties make some sort of similar wardrobe transgression?

One trend the decade aced, however, was the v-neck sweater. From Rachel's solid-colored cashmere versions to Chandler's preppy sweater vests, v-necks took center stage in the late '90s, on the small screen and off. If you're looking for the trend's most recent incarnation, simply take a gander at Alexander Wang's athletic-chic, sports-striped mesh tops, which echo the look in the most avant-garde manner.

Speaking of transgressions, if you missed the '70s the first time around, you were in luck for the millennium — 2000 brought the decade's looks screaming back with the help of Friends. A disgruntled Rachel returns from Ross' honeymoon in Greece clad in an embroidered peasant top and longer locks than ever, pairing the look with ill-fated olive-hued capris and a glowing tan. However, after its short blip on the fashion circuit, the bohemian trend was put back to rest with its former devotee: Phoebe.

Anyone who wore platform slides, a slit maxi skirt, or serious leather around the year 2000 was inadvertently stealing from the Friends playbook. In an effort to make even wintry ensembles sizzle, chunky knits appeared with slim-cut leather pencil skirts and heeled boots on the series, though in Phoebe's case, the color palette remained in punchy, vibrant hues. Matrix-esque leather trench coats and streamlined silhouettes almost convinced viewers that science fiction had predicted future trends, until 2001's runways ushered in a new host of ideas entirely.

The new wave featured a host of masculine-meets-feminine aesthetics, from low-slung, fitted, bootcut jeans to utilitarian, embroidered tees. Even the odd pair of military-inspired cargo pants snuck their way into the show's wardrobe, stoking the fire under an already hot trend. In lieu of the series' previous diaphanous slips dresses and unembellished uniforms of mini skirts and tees, Friends' characters began to wear clothing which could only be described as — gasp! — adult.

Though Rachel's character is seen in thigh-grazing pleated skirts until the bitter end of the series, they pair well with more thoughtful button-downs and cashmere sweaters; fans of the early-aughts series The O.C. will recognize the trend as a front-runner on the latter show's first season, which began in 2003 as Friends was coming to a close. As a mother-to-be with a baby on the way via surrogate, Monica favors bell-sleeve blouses and jeans tailored to her slim figure, accented with the odd denim jacket for utilitarian warmth. And as any Millennial recalls, the jean jacket was indispensable to a tween in the early aughts. The reigning queen of eccentricity, Phoebe ends her reigns on Friends with a printed dress, periwinkle stockings, and a fistful of jewelry, a trend a certain Upper East Sider would snatch up a mere three years later.

Friends made its mark on history, and thanks to its current, incredibly addictive streaming capability, a new generation is bound to fall for its innate flair. So is the world in for another round of suspenders, chunky platforms, and ragged denim? Stay tuned to find out.