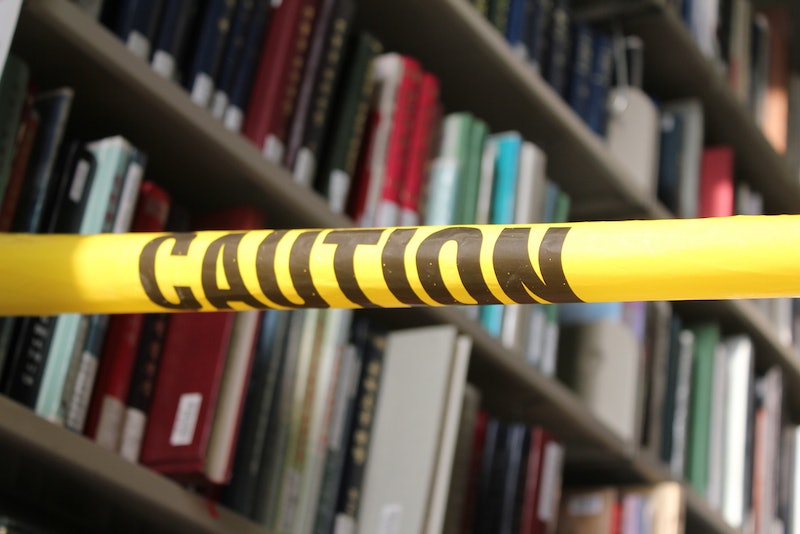 It's no secret that censorship is alive and well when it comes to books. Libraries, schools, and hey even entire countries have been banning books for the ideas they stand for, the content they include, and sometimes even the authors' values behind the scenes. But putting these major banned books — meaning the books that caused a particular stir or the ones that were banned often, in several places — on a timeline gives you one important piece of information: context.

Not that it's ever OK to ban a book, but the context can show the atmosphere in cities or entire places that may have lead to a book banning. And that's always important to the larger cultural discussion around censorship in literature and elsewhere. Say, for example, is it really a huge surprise that Stalin was like, "Oh, absolutely not," when it came to stocking George Orwell's satirical, scathing criticism of the the then-Soviet Union leader Animal Farm? (Hey, his informed distaste for the book beats some banners who censor for reasons they don't even understand. Or censor books, proving their children are more mature than they are.)

PrinterInks.com lay out a timeline of book banning to provide this necessary context, and boy, it's not only informative, but it provides a few chuckles along the way, too.

My favorite part of this timeline is that it starts with two of the most often banned books ever: The Bible and Karl Marx's The Communist Manifesto. Though, again, I don't believe in any book banning, you can probably imagine why these two have been banned consistently throughout history. They're two biggies. But then BOOM, the timeline next hits you with Jack London's The Call of the Wild. Yeah... OK, Nazi Germany; it's definitely London's book that's "too radical."

My second favorite story of this timeline is the easy-to-read version of Shakespeare's Romeo & Juliet under the Top Banned Books in Schools. Only after the students took home the easy-reading version of the absolute classic play did parents start to complain about the play's "mature themes about sex." Did they not understand there was sex in the play in Shakespeare's original? Was it too difficult to parse for them then?

And finally, there's L. Frank Baum's classic The Wonderful Wizard of Oz, the final item on the infographic. Was it banned because of its promotion of capitalism? Nope. Maybe the violence, with birds poking out eyes or the Wicked Witch literally melting into nothing? Or maybe it was too scary, with the flying monkeys and all? Nope and nope. It was banned in Detroit because it has "no value for children of today" (*cough* 1957) and it's "bringing children's minds to a cowardly level." I don't even .... Sigh.