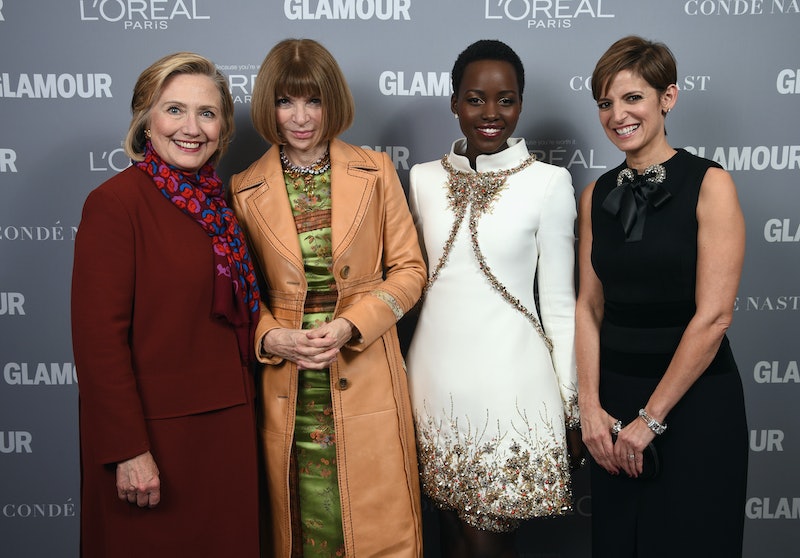 I don’t normally cry in my everyday life, let alone when I’m at work. Yet there I was, standing in the bathroom stall holding back tears, hoping no one else would walk through the door. The year was 2012 and I was still in college interning at a glossy magazine — everything seemed to be going well until one day when my supervisor pulled me aside and told me that I essentially walked improperly... that my gait was not filled with enough “executive presence” to be taken seriously. Not exactly the harshest critique, but her comments nonetheless seemed like a meaningless affront; what did my walk have to do with my professional success?

Now fully a part of the professional workforce, I must admit I know what that supervisor was talking about. Like it or not, people were judging me and my capabilities based on every part of my presentation, even aspects that, like my walk, I never really thought about. Standing at 5'1" (on a good day), I need to be fully aware of how I carry myself, since I can — and do — get easily mistaken for someone half my age. At the time, the term “executive presence” was still something I had yet to understand — an elusive term I remain hard-pressed to fully figure out. For women, however, looks play an unsurprisingly important role.

According to a study completed by the Center for Talent and Innovation (CTI), executive presence is loosely determined by three major factors: confidence, communication, and appearance. To exude confidence means to act gracefully under fire, to be aggressive when aggression is most needed; to communicate properly means to know how to command a room, to sometimes speak without ever speaking. Then, of course, there is appearance — the bond that holds everything together, serving as what the CTI study put as, "The filter through which your communication skills and confidence become more apparent." And while the results of this study show that appearance affects the executive presence perception for both women and men, they also demonstrate that it has a greater impact upon the former. Case and point: 83 percent of the 4,000 respondents said overall appearance blunders like "unkempt attire" detract from a woman's executive presence, compared to the 76 percent that said it would detract from a man's.

So what does it mean for a woman to "look the part?" In the era of the girl boss, it feels as though women should not have to stress over this question — that looks should once and for all come secondary to credentials and qualifications. But, as the aforementioned study and the testimonies of so many professional women demonstrate, looking the part (whatever that may mean) still proves an integral key to success.

There exist hundreds of tips and tricks on how to ace personal appearance in a professional setting. Certainly, there are general workwear rules that every professional should follow. Work is work. The office is not a club, beach, or sofa. It is the office. But chances are if you're interested in upping your executive presence, such rules don't really need regurgitating. Perhaps the trickiest part of looking the part is determining what part you play, want to play, or, where you play said part.

As mentioned above, I am only 5'1". That means that I consistently worry that in a power suit I look too much like a girl playing dress-up and that in a more casual ensemble (take a blouse and a printed skirt, for example) I look too much like a girl fresh out of AN afternoon lecture. Moreover, in my specific field of interest office protocol can vary drastically from one place to another, just as it can in a broader, field-to-field sense. As the CTI study states:

"[Executive presence] is elusive...because it changes depending on the culture you find yourself in (Google is very different from Goldman Sachs), and the band level at which you operate."

Attend any career counseling session, and you'll hear about how important it is to dress appropriately, but this "appropriately" usually pertains to a more formal environment, where concern lies more in being underdressed rather than overdressed. But what about those places and positions — tech companies, start-ups, ect. —that don't have a strict dress code, where it could very well be possible to easily underdress and overdress for work? Having worked in a variety of such places, I have set a specific criteria for myself in the efforts of finding that perfect balance to look the part, for as my magazine intern experience proved, such a balance is undeniably important.

For me, everything is based off of one simple question, something I started to ask myself as I commuted every day amongst a hoard of suits and ties: Would people on the subway know that I was headed to work? Sure I always dressed casually, but do I still look professional, even to these people so accustomed to far more formal work attire? To assure that the answer always remains "yes," I make sure to adhere to certain basic rules that, while admittedly far from revolutionary, nonetheless serve as a great help:

I think I got so upset the day my supervisor pulled me aside because up until that moment, I never really had to face the reality that appearance matters. In a perfect world, executive presence would stand on the two pillars of confidence and communication based upon a foundation of impressive credentials and qualifications. But, until that happens, it's always best to be prepared — beat the game so you can change it.