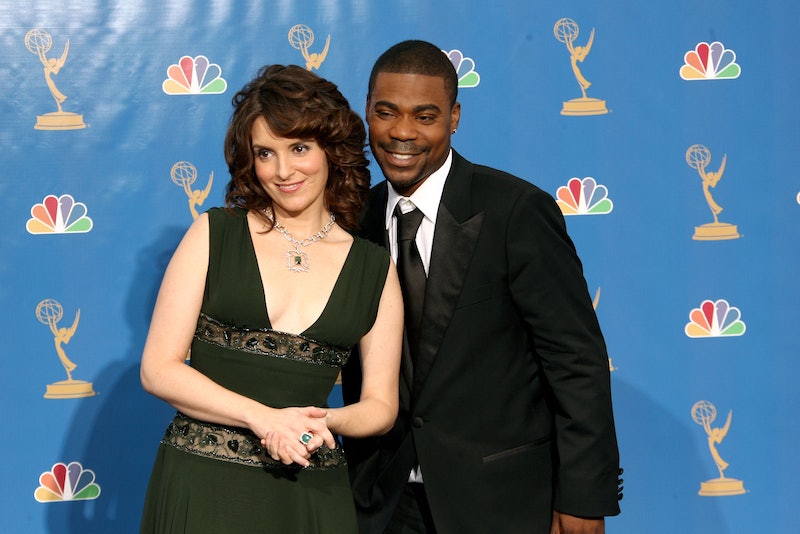 Tina Fey has good news about her friend and former 30 Rock co-star Tracy Morgan, who suffered severe injuries following a car accident over the summer. Tina Fey gave an update on Tracy Morgan to E! News saying, "Tracy has already told me that when he is well, he wants to be on the show. And I said, 'You got it.'" Fey is, of course, talking about her forthcoming Netflix show, The Unbreakable Kimmy Schmidt, which stars Ellie Kemper from The Office and the one and only Jane Krasowski, Jenna of 30 Rock, but more importantly, the Rural Juror.

Fey and Morgan were colleagues long before Morgan starred on 30 Rock as a fictionalized version of himself, Tracy Jordan. At Saturday Night Live, the two worked together for many years, sometimes converging on Weekend Update. Some of the best moments from the seven seasons of 30 Rock came from the back-and-forth between Morgan and Fey, who on the show have a relationship of actor and writer — the same relationship they had back on SNL. They seem like an unlikely pair of friends, but it seems like Fey really knows how to write for her good friend and help him be the funniest he can be.

In honor of their upcoming collaboration, here are some of my favorite moments the two comedians have shared.

Fey On Her Favorite Episodes of 30 Rock

In 2008 at a panel at the Paley Center for Media, Fey was asked what her favorite moments and episodes of 30 Rock were so far. She said that she most enjoyed when she and Morgan would improvise in their dialogue. They did a scene where Liz Lemon is incredulous that Tracy Jordan has a yacht, and he says he has all sorts of stuff — including the first moped.

There are so many scenes from 30 Rock where Tracy pushes Liz to the brink of madness, but at the end of the day, she really will do anything for him. Still, they are both competitive and stubborn in the way that friends are, which is why this absurd laugh-off they have is probably my favorite Lemon-Jordan scene because it's so absurd.

This one gives the laugh-off a run for its money. Liz Lemon is often exasperated for having to play babysitter to Jordan, who is temperamental and immature and stubborn, but is, of course, her moneymaker, so she puts up with his antics. When Jordan and his wife Angie are filming a reality show that goes behind the scenes of TGS, Tracy finds he has to behave and obey Liz to come off looking good for the camera... until he finds a loophole. If he sings his words to the tune of licensed songs — here, "Uptown Girl" by Billy Joel—the network can't air it. Jordan is obviously better at this than Liz.

"Black is the new President, bitch."

In 2008 during the presidential election, Fey infamously said on Weekend Update of Hillary Clinton, "Bitch is new black," and, of course, that bitches get stuff done. Morgan was a supporter of a different candidate, however, and in a rare, serious (well, serious for Morgan) moment, he came on Weekend Update with a rebuttal for Fey in support of Obama. "Tina, you're my girl, and I love you... bitch may be the new black, but black is the new president, bitch."

30 Rock's series finale was sharp-tongued, fast and hilarious, with tons of callbacks to the past seven seasons of the series, not to mention, it paid homage to so many great sitcom series finales before it. And even though it was so funny and a great way to end a show, there was sentimentality among all the laughs. This scene where Liz says goodbye to Tracy is one of the more serious moments they shared on the show, and somehow really sad, which is not what we signed up for, 30 Rock! Damn you.

More like this
Here’s What Happens To Bill & Frank In 'The Last Of Us' Video Game
By Brad Witter
Grammys Host Trevor Noah Made Adele's Dream Of Meeting The Rock Come True
By Brad Witter
Pedro Pascal Barely Got Through The "Lisa From Temecula" 'SNL' Sketch
By Stephanie Topacio Long
Melanie Lynskey Plays A “Ruthless Leader” In 'The Last Of Us'
By Brad Witter
Get Even More From Bustle — Sign Up For The Newsletter
From hair trends to relationship advice, our daily newsletter has everything you need to sound like a person who’s on TikTok, even if you aren’t.