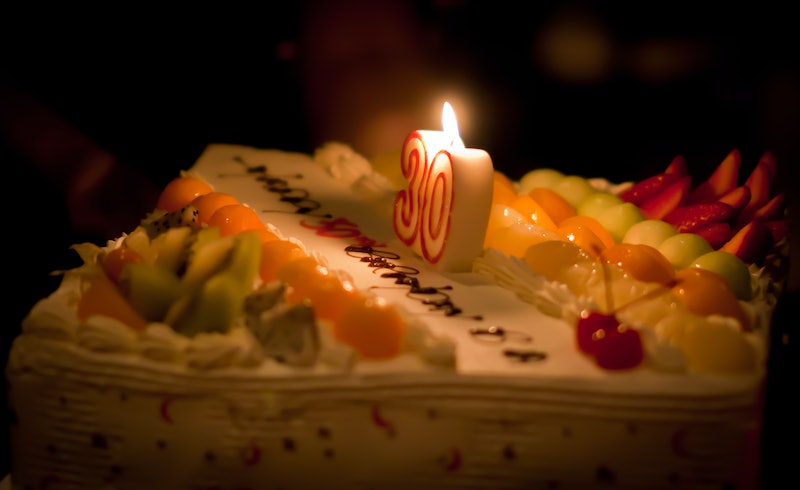 For so many of us, turning 30 is a ginormous, spectacular milestone. To some, it's a bummer because it means they've officially gotten "old." To others, it's an exciting segue into the next phase of life, where Sunday brunch replaces Friday night ragers and bills are paid in a timely fashion. It's a big deal because it's an age ending in a zero, which means there's tons of unnecessary pressure to celebrate and behave in a certain way. It's like New Year's Eve plus a life threatening illness, because you will feel equally thrilled about the possibilities the future holds and disappointed by the lack of goals you've accomplished by now.

The best thing about turning 30 though? The shockingly low number of f*cks you give about things that you used to obsess over. Maybe that's part of the "time is running out" feeling behind this birthday. Life is short, and you are getting closer to death, so there's no point in stressing over the small stuff. You have things to do, people to meet, and asses to kick. There's just no room for the BS in your life at this point. Here are all the things you will no longer care about once the clock strikes midnight on your 30th birthday.

Anyone close to or just turning 30 remembers a time when the Internet didn't exist. We made all the amateur mistakes of sharing our a/s/l's in shady chatrooms when it first became a thing, and we did all the Facebook poking that was allowed. The shine has since worn off on the instant gratification experienced after posting a selfie and having people press the Like button. You will post things because YOU like them, and you will not care if anyone else does.

2. The everyday activities of former flames

Stalking exes on the Internet in your 20s was a great way to pass the time. Especially since you were younger, less stable, entering a whole new universe as an adult, and you wanted to see if they were struggling just like you. Whether or not you're currently in a relationship at 30 or even how settled you are in your career doesn't matter because you will generally just care less about competing or superficially judging others.

3. What others will think of your hobbies

Maybe at 22 you would've been embarrassed about admitting your secret love of knitting, or you would've been concerned that people would find out you like archery and assume you're only into it because of Katniss Everdeen. You have found a free-time activity that fills you with joy, and you will not let anyone take it away from you.

4. Whatever is currently considered "cool" in fashion

By now, you have created a steady rotation of things that look good and feel comfortable. Whatever trends arise matter not, because you know what you will look your best in. You might still try a new trend here and there, but trying ALL the new trends is just a waste of time and money.

5. How much food you can get with the least amount of money

Quantity is replaced by quality by the time you reach 30. So goodbye 10 for $10 supplies of Bagel Bites, and hello to pricey olive oil and rich blocks of cheese.

6. Ordering all the sugariest drinks

They were fun when you were 25, but now they give you a headache and make your tongue feel like it's wearing a turtleneck after one drink. Bitter wine or beer is better.

7. Looking cute during a workout

Did you used to show up to the gym with a polished makeup look and just hop onto a machine? I did. I don't even want to think about how much my skin wanted to murder me for that. How you look to everyone else in the gym (who are probably only looking at themselves in the wall of mirrors), will no longer matter.

8. Staying up the latest

You will be surprised if you even make it to midnight on New Year's Eve. Sleep is the key to beauty, health, and overall happiness, so staying up until 4 a.m. just seems reckless.

You brag about how you used to drink every night of the week in college and wake up for 8 a.m. classes without any major hangover symptoms. Now, it takes you three days to recover after a night of only three drinks. Time to take it easy.

Let the Real Housewives worry about all that. Your only time allotted for drama is when it's on your TV screen. Otherwise, just... no.

When "Breaking News" and "Haircut" are in the same headline, you used to ALWAYS click. But now you see just how ridiculous that is. Nobody's haircut should be considered breaking news. Not even Beyonce's.

Not everyone is going to like you. That was hard to accept in your 20s, but now it's just a reality. And you are fine with it.

13. Being friends with everyone

You only need a few who always stand by your side. Not 35 who only text when they want something.

14. Missing that one big bash

There will always be another party. FOMO is only a problem for kids these days.