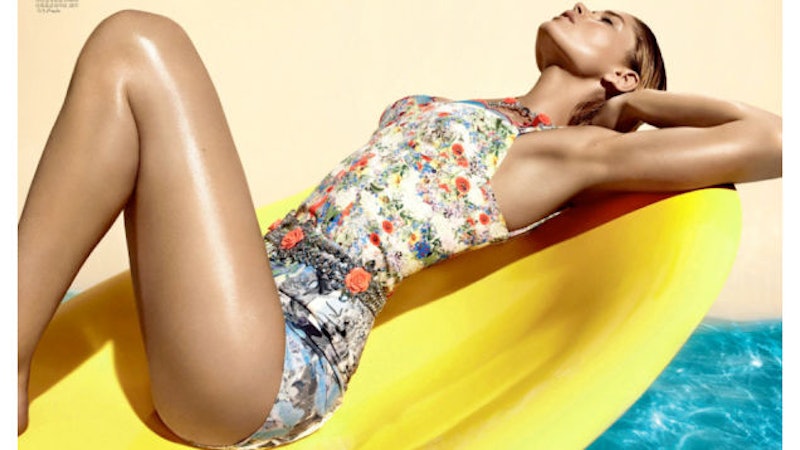 We all know that Photoshop is used to whittle down waists, enlarge thigh gaps, and generally distort body image across the fashion and retail fronts. In society, we’re inundated with pictures of these altered bodies to the point that our beauty standard has become wildly unrealistic and unattainable. But every now and then, photo editors in fashion and retail make Photoshop mistakes that accidentally eliminate models’ limbs, blow their own cover, and allow us a gratifying “GOTCHA” moment.

The latest instance of digital amputation comes courtesy of Moschino’s Spring/ Summer 2015 campaign. As a Moschino-clad model in high-waisted briefs swings her right leg back in glee, it apparently disappears into the 5th dimension: a place that swallows the limbs of models, socks, underwear, and other things that routinely go missing. While it would be great if this was done to show that amputee bodies (and there do happen to be plenty of amazing amputee models out there), as well as non-amputee bodies are beautiful, that’s probably not what’s going on in instances like this. When these Photoshop flubs come to light, the absurdity and extremity of photo editing stare us in the face. But luckily, it gives us an excuse to call the custom out and talk about it.

So, let’s break it down. Here are seven times that fashion and retail have inexplicably photo shopped the limbs of models and actresses out of existence.

In March of 2011, Photoshop Disasters caught the Baron of corporate casual workwear eliminating the left arm of one of a model innocently modeling one of its t-shirts. They eliminated the picture quickly after PS Disasters caught them, but the good folks of the internet immortalized it in the form of a screenshot. The best part? This has totally happened to them before.

A tipster of the Huffington Post caught Talbots in some photoshop tomfoolery back in January of 2011. It looks like the model in the eyelet coverup was probably crossing one leg over the other, which the editors probably tried to shave off. However, it looks like someone just didn't know when to stop.

Photoshop Disasters caught Vogue in the great caper of Amber Valletta's missing left leg in 2011. While she appears to be in a wide legged stance of triumph, one of her gams has curiously gone rogue. The basic physics of her balance are a mystery.

In June of 2012, Jezebel spotted the curious absence of supermodel Doutzen Kroes right leg in a swimsuit-season issue of the magazine. Not to mention, her right arm is also nowhere to be found. Perhaps, Doutzen's right limbs are ghost limbs that don't register on film.

In one of the photos from Claire Danes' August 2013 spread in Vogue, the Homeland star poses with co-star Damian Lewis with an apparent missing calf. It would appear that someone accidentally dodged Claire's leg into nonexistence, or that her leg has been swallowed by the mattress.

These are the same photos that Jezebel offered $10,000 for the unretouched originals of in January of 2014. In an essay dissecting the hypocrisy of Vogue gratuitously photoshopping an outspoken feminist who champions body positivity, Jessica Coen called out "the conspicuous absence of Lena's arm" as you see above. Theoretically, she could be lying down on top of it, but then she would probably have fallen off the bed mid-shot.

This one's still pretty fresh in everyone's memory. Moschino's Spring 2015 ad campaign was released this week, and much to the chagrin of the internet, one of the luxury-clad minxes in the photo series is apparently missing her left leg. Either that, or she is kicking her extremely small left leg behind a comparatively large right leg, which has eclipsed the other limb. However, I'm kinda stretching with that logic.