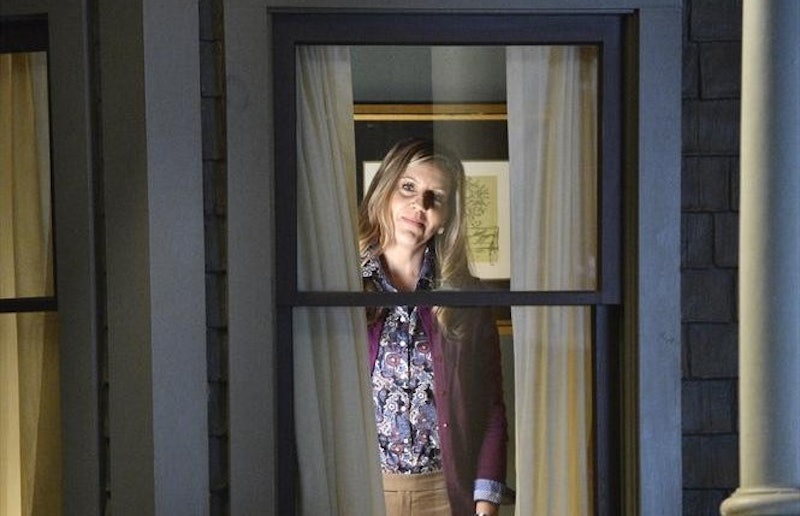 Nothing is as it seems on Pretty Little Liars — certainly not when we have 60 different versions of "Red Coat" running around Pennsylvania and an infinite supply of masks that look like Alison DiLaurentis' face. But one thing that tends to be true on Pretty Little Liars is this: when you actually see a dead body on the show, you should assume that they're really, truly, forever dead. (This isn't Ravenswood , you guys.) We've seen a few dead bodies on the show — RIP, Mona — but there's one dead character that many fans just can't shake. There's a fan theory out there that suggests we haven't seen the last of actress Andrea Parker, who plays Alison's mother Jessica DiLaurentis on the show — and they aren't talking about seeing Parker play Mrs. D via flashbacks. Some fans speculate that Mrs. DiLaurentis could have a twin — and that twin might be A.

There are a few reasons why this could work. As Reddittor rjh24503 points out, Mrs. D saw someone hit Ali with a rock, but chose to bury Ali rather then tell the police what really happened to her daughter — that's not something you'd do for just any person, but it is something you might for family. Then there's the fact that just before the attempted murder went down, Mrs. DiLaurentis took a phone call that fans assumed was about a patient who had escaped Radley. Sure, fans believed that person to be Bethany, but what if that's not the only person who Radley was calling about? Mrs. DiLaurentis' sister might have also been a patient there, and could have ran away from the mental institution with Bethany. It would place both Mrs. DiLaurentis and Bethany in the right place at the right time.

Then there's the whole "Black Widow" thing. In Ali's dream sequence in the Christmas episode "How the A Stole Christmas," we saw Mrs. DiLaurentis dressed like the woman in black who makes an appearance at Detective Wilden's funeral. Showrunner I. Marlene King has made it clear that this person — the writers refer to her as Black Widow — is connected to Uber A. When Mrs. D is dressed in the Black Widow garb, it's to apologize to Ali and to tell her that she's to blame for everything that will happen to Ali. What if this is Mrs. DiLaurentis' ghost trying to tell Ali that it's her own twin who tried to kill Ali all those years ago? PLL actress Tammin Sursok did say that there would be a twin reveal at some point on the show — and it could very well mean a double DiLaurentis.

The final clue that suggests Mrs. DiLaurentis might have a twin who stole the game from Mona? Let's just say the eyes have it. In the Christmas episode, we see someone attack Hanna, but don't catch their face. When Hanna is recovering in the attic, the camera turns, and we see a set of eyes staring back at us from behind a mask. The color of those eyes? What do you know... they're blue.