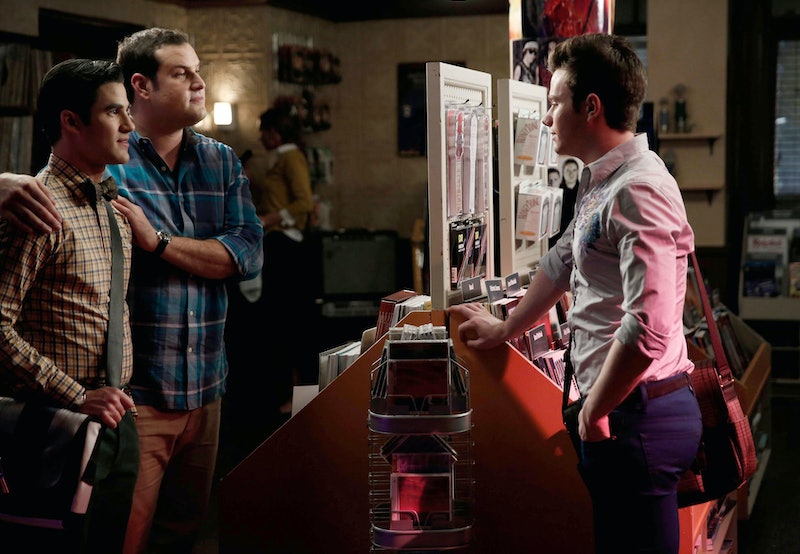 Well that's one way to start some interesting new drama. In the two-hour Season 6 premiere of Glee's final episodes, Blaine and Kurt were revealed to have had some really bad moments in their lives since we last saw them. Kurt ended his engagement with Blaine and broke up with him which left Blaine in a really terrible place. His grades suffered and he was eventually kicked out of NYADA and had to return to Lima, Ohio. Kurt on the other hand thought he was alright and after taking some time before dating again (out of respect for Blaine), he tried to get back in the scene with speed dating and gave a quick shout out to Tinder. But he was definitely not doing as well as he'd hoped and realized with the help of a therapist that he did in fact miss the love of his life. Those are Kurt's words, not mine. When he finally realized he was ready to win back his perfectly gelled and coiffed ex-beau, he (and the audience) found out that Blaine had moved on... With Dave Karofsky.

Yes. That Dave Karofsky. The one who tortured Kurt in school and then later revealed he was gay, was in love with Kurt, and also tried to commit suicide in one of the saddest moments earlier in the series. Karofsky had the potential to become of the most fascinatingly multi-dimensional characters on Glee, but the show never truly allowed him to form into the person he could be. Karofsky's potential and interesting characteristics doesn't mean I'm particularly happy about his dating Blaine as the revelation brought Kurt to tears, and Kurt getting upset makes me upset. But the coupling actually makes a lot of sense, despite some of us at Bustle not enjoying the idea of it at all.

Blaine reveals to Kurt that he and his new boyfriend got together thanks to Kurt himself. One night during wallowing, Blaine went to the local Lima gay bar on a "bear" cowboy night. There Karofsky was dancing the Two-Step and locked eyes with Blaine. The two caught up, Blaine vented about his recent (at the time) break up with Kurt and Karofksy talked about how much Kurt actually helped him accept himself as a proud gay man.

It's upsetting that the reason for Blaine and Karofsky's romantic bonding was because of Kurt but it is the most obvious way to get them together. And it is pretty realistic to a lot of people still trying to get over their first loves, which Kurt is for both Blaine and Karofsky. But it's messed up and it does reveal to me is that neither Blaine nor Karofsky are really in this relationship for the long haul, despite both of them wanting to move forward. What needs to happen is for the two break up amicably and figure out their own journeys individually, away from each other and away from Kurt for a little while.

Blaine already is going back to his old self by coaching the Warblers. That could mean that he's stuck in old ways and doesn't know how to change. Or it could mean that he is finally realizing where he truly belongs. I hope it's the latter but with this show, you really never know. If he and Kurt are meant to be together, then they also need to journey away from each other (keep going to therapy probably), and come back together when they're finally ready to be happy with their true selves and with each other in the realest way. Either way, I just don't like Kurt bawling in a bar restaurant. It's just not fun to watch. Hey Glee, let's change that please.