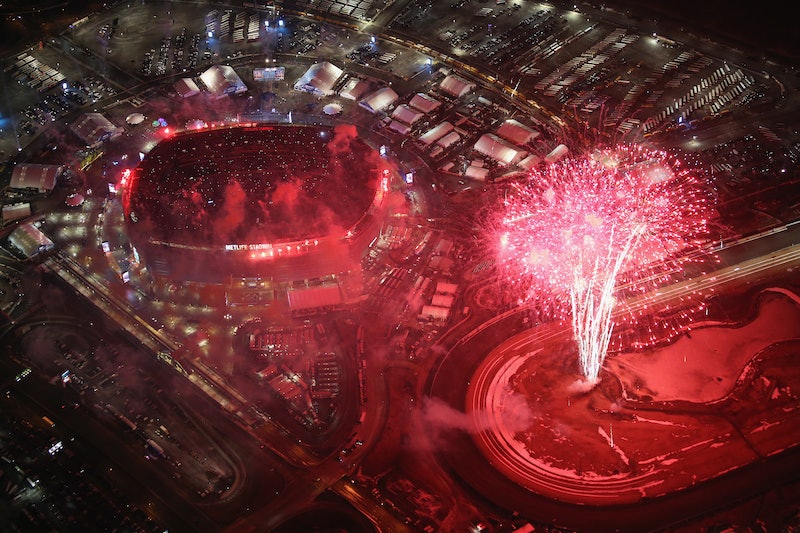 Whether you're in it for the championship, the commercials, or Katy Perry, the network that hosts the Super Bowl is critical. This year, NBC will host Super Bowl XLIX in 2015. This is a big year for NBC. First the Golden Globes, then this! The network is, of course, no stranger to sporting events. They've had a monopoly on covering the Olympic Games for ages. They have also been on a three-year Super Bowl rotation with CBS and Fox since 2007, and that's booked until 2023. So they've got this.

Of course, the real reason it matters what network the game is on (besides, you know, turning your TV to the correct channel) is that it's important to know what TV show you'll end up accidentally watching after the game ends. In the past, NBC has delivered special episodes of Friends, The Voice, and The Office; this year, the lead-out program will be The Blacklist. NBC has already sold 95 percent of the ad sales for the game and it was recently announced that Lenny Kravitz will join Katy Perry's Super Bowl Half Time show. This all sounds very exciting. The network matters! Especially if there is another blackout. Who are the fans going to direct their angry tweets towards if something bad happens?

What does it mean for the broadcast that NBC is hosting the Super Bowl? What can we expect? NBC is a network that thrives on tradition and the grandeur of television. They love occasion, as such, here are a few of my predictions for the 49th Big Game on NBC.

Never, ever forget. Nothing says "football" like a bunch of sitcom and procedural characters singing an old-timey showtune. In other news, I miss Smash. Look how innocent 2012 was. NBC is sure to cook up something fun for the big game, especially with the Tonight Show's return to New York City and their commitment to live programming over the last few years.

The one difference between the NBC of today and the NBC of 2012 is that this year, almost all of the current shows have been canceled or are on their way out the door. The Voice and Grimm are going strong, but that's about it. I can't see NBC rousing up the enthusiasm for a group production.

However, if there's no big musical number, with the final season in full swing and the show's history, I wouldn't be surprised if we saw some football-related commercials starring the Pawnee crew, at the very least. They have a history of sports-related commercials, as seen above.

Katy Perry Will Star In A Live Musical

Hey, I'm just saying, she's in their little black book of performing arts contacts now. If Katy Perry is cast as Marian the Librarian in The Music Man Live! opposite the NBC favorite Jon Hamm, don't tell me you were surprised.