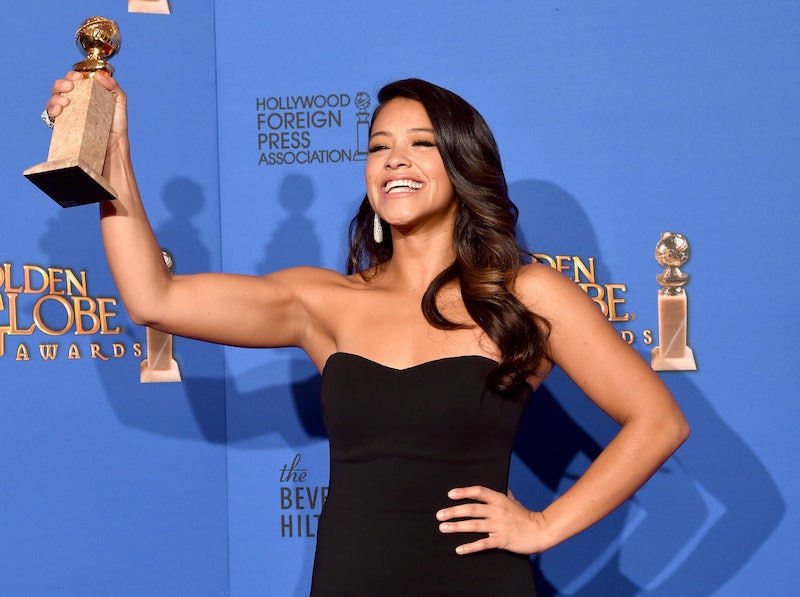 They aren't kidding when they call The Golden Globe Awards Hollywood's "Party of the Year." Not only are stars of both television and film there rubbing elbows, but there's booze on the table and everyone is getting loose. What were some of the best and worst moments from tonight's Golden Globes? I'm biased, but I'm working hard to not include everything that Tina Fey and Amy Poehler say, do, and wear. This is the third year they've hosted and it just keeps getting better and better. Not that you have to do much to the Globes to make them great. Anything can happen in this show, and that's why I love it. The speeches are rambling. The jokes are biting. The rising stars are tripping. The man buns and beards are all gussied up. Someone always says something weird and/or political. The E! coverage of the red carpet tries every kind of "cam" imaginable. I think we were all over the phrase "selfie stick" about two minutes in.

Tonight's awards had some happy surprises, like the wins for Jane The Virgin's Gina Rodriguez and Amazon's Transparent for Best Comedy. I guess I have to start watching The Affair, too. Nobody saw that winning for Best Dramatic series. That said, here are the moments that made and broke the Globes.

"Welcome, you bunch of disposable, spoiled, minimally talented brats." The opening monologue from Tina Fey and Amy Poehler got right to the punches. How do I even pick a favorite moment? The game of "would you rather" — and how Tina Fey knows that you always choose Chris Pine? The Cosby jokes that went there like an episode of Degrassi?

Also, was his "surprise presenting" with Jennifer Anniston a bit? That had to be a bit, right?

All The Stars Freaking Out When Prince Showed Up

Also, she was announced as "from Star Wars Episode VII: The Force Awakens," not, you know... last year's nominee for Best Supporting Actress of anything.

Common and Gina Rodriguez both blew their moments at the podium out of the water tonight.

...and Uzo Aduba loves it. Hey, the censors aren't here to eat cheese and crackers. They're here to work!

That Moment When You Realized You Had Clooney Feels

He may have won a Cecil B. DeMille, but he stole our hearts. Too cheesy? I don't care!

I was over here concerned about Jennifer Lopez's underwire popping out, then Jeremy Renner made this crack. How drunk are you, Hawkeye?

I know comedy. I knew we had to see this North Korean Press character three times — it's a rule. I'm glad that Cho, Tina Fey and Amy Poehler went for it. I still didn't love the joke or the character.

Was this new for an awards show? I'm not used to seeing winners accept awards from such a tight shot. It threw me off.