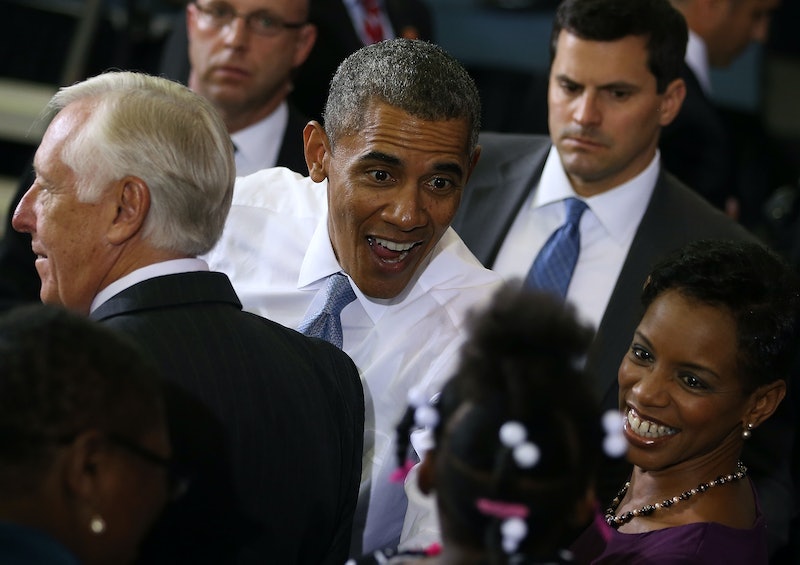 GOP leaders listed their conditions for an increase of the debt ceiling Thursday, which included a one-year delay of Obamacare. Their conditions for debt-ceiling increase are all measures that have gone through the Republican-led House, but not passed the Democratic Senate. Aside from the delay of the Affordable Care Act, their demands include: authority to fast-track overhaul the tax code; construction of the Keystone XL oil pipeline; blocking new Environmental Protection Agency regulations on greenhouse gas production; eliminating a $23 million fund created to ensure the dissolution of failed major banks; and more permission to explore energy options on federal land. It's a long list of GOP grievances, and they are ostensibly prepared to use the threat of the potentially devastating default on debt to get their needs met.

At an event in Maryland Thursday, President Obama laughed off the Republican standoff against his healthcare program. The president read off a quote to the audience from Rep. John Fleming (R.-La.) who called Obamacare "the most dangerous piece of legislation ever passed."

"Think about that," Obama joked. "Affordable healthcare is worse than a law that lets slaveowners get their runaway slaves back. I mean, these are quotes. I am not making this stuff up." (You can watch video of his speech here.)

Obama also cited the somewhat murky assertion that Obamacare must be repealed "before it literally kills women, kills children, kills senior citizens," courtesy of Michele Bachmann (R.-Minn.) "I have to say: That is from six months ago," said the president. "I just want to point out that we still have women. We still have children. And we still have senior citizens."

Many in the GOP may be trying to distance itself from these more outrageous comments, not to mention Senator Ted Cruz's epic Green Eggs and Ham reading. Politico reports that Cruz had hardly ended his futile filibuster at noon on Wednesday when GOP leadership began rolling out a new plan.

“I’m for delay, defund, repeal, demolish, destroy, whatever the ‘d’ is, when it comes to Obamacare — I’m for," said Senate Minority Whip John Cornyn, thus pushing for the GOP to refocus the debate over Obamacare by linking it to raising the $16.7 trillion debt ceiling.

GOP senators clearly believe that this is a better route to opposing Obamacare than Cruz's more theatrical method, claiming that his way merely works to delay the inevitable. “This is not a situation where you dig your heels in and Obamacare gets defunded," Wisconsin Senator Ron Johnson said. Corker called the filibuster a "box canyon." North Carolina's Republican Senator, Richard Burr, was more blunt: he called it the "dumbest idea" he'd ever heard.

The reason is that the government shutdown, which Cruz was pushing for, would be politically damaging for the Republican Party. Its PR toll would simply not justify the costs.

Linking Obamacare's fate to the debt ceiling debate, on the other hand, places the burden on the president. He will have to negotiate with GOP leadership ahead of the Oct. 17 deadline to get enough votes to raise the debt ceiling, and Republicans have already named their price: a delay in implementing Obamacare's controversial individual mandate. Under current guidelines, Americans have to find health insurance coverage by Jan. 1, or face a fine.

Of course, this approach is also not risk-free. In 2011, credit rating agency Standard & Poor's downgraded the federal government from a AAA rating to AA+ — a largely symbolic move after a heated debate in Washington over the debt ceiling. But congressional Republicans seem willing to gamble that in the debt ceiling scenario, there will be plenty of room to spread the blame around.

Meanwhile, the Department of Health and Human Services released a report on Wednesday with optimistic figures for healthcare premiums under Obamacare. The average monthly price of an unsubsidized, mid-tier health insurance plan under Obamacare? $328, lower than the government initially estimated.

More like this
How 5 People Upended Their Lives To Fight For Abortion Rights
By Hannah Smothers
Here’s How Lizzo Is Supporting Abortion Rights After The Roe v. Wade Reversal
By Brad Witter
The Best Summer Workout Gear Of 2022
By Carolyn Steber
Plan C Vs. Plan B: What's The Difference?
By Lexi Inks
Get Even More From Bustle — Sign Up For The Newsletter