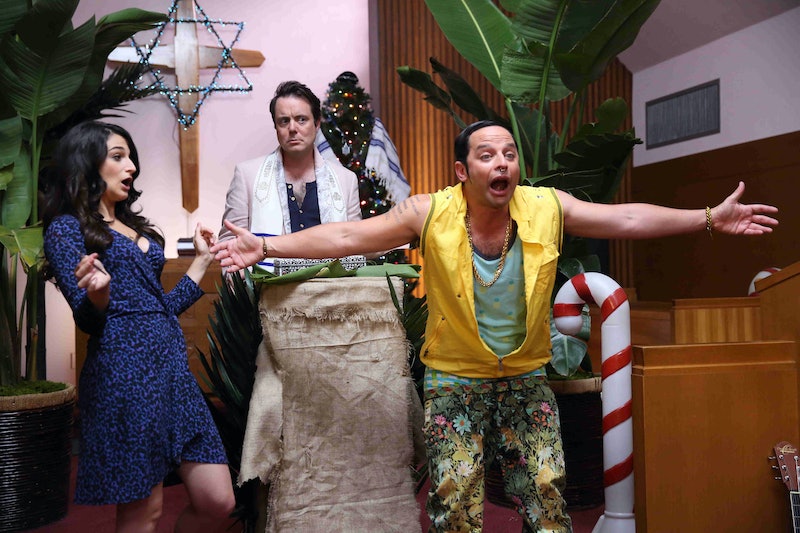 I had been pumped for the new season of Kroll Show to start, but when I found out in Dec. that Season 3 would be its last, I was confused, hurt, sad, and most importantly — unprepared. That means the show is going to end in the year 2015, which is upon us right now, so when is the series finale of Kroll Show ? Season 3 of Kroll Show premieres on Tuesday, Jan. 13 on Comedy Central, but I'm not ready to say goodbye just yet. But the series finale will be here before you know it.

The frigid final months of winter can drag on (I live in N.H. so this statement is 100 percent true), but TV entertainment is one thing to actually look forward to. Each half-hour episode of Kroll Show will be like a delicious present of warmth and comfort, but it will pass by in blur (or Burr, like Kroll Show's Detective Smart Bill Burr or like the sound you make when you're shivering — clearly, this brilliant joke works on so many levels so just let it happen). And I'll be left out in the cold — wanting more.

As for when the last episode (ever) of Kroll Show will air, there hasn't been an official release date. But we can make a hypothesis based on previous seasons — Season 1 of Kroll Show only had 8 episodes, while Season 2 had 11 episodes. If Season 3 has the same amount of episodes as Season 2, we can expect the season finale to take place on Tuesday, March 24 (that's if the show doesn't take a week off). March 24? That's way too soon!

I now want to take this moment to say, you must watch the last season of Kroll Show. Whether you're already a fan or considering diving into this Nick Kroll show, I can honestly say you won't regret watching it. And I do believe it gets even funnier upon rewatching. But if you are new to the show, make sure to start at the beginning (Comedy Central has all of the episodes online for free) since the world of Kroll Show is vast and intertwined — just like the real reality TV shows that it spoofs. For example, take the pet plastic surgeon Doctor Armond.

Doctor Armond has been on a ton of TV shows in the Kroll Universe — like Armond of the House, Armond About Town, House of Armond, and of course, his televised murder trial for murdering his second wife. He wasn't convicted due to a mistrial, with no help from his most adorable comedian lawyer Ron Funches or the aforementioned Detective Smart. If this all sounds ridiculous to you, just think about how many shows the Kardashians have on E! and then talk to me.

I could go on about the brilliance of Kroll Show for days. But why I'm so confident in telling people to check it out is that it can appeal to non-reality TV lovers and reality TV lovers alike. A knowledge of reality TV can actually make all of the jokes even more amusing, but you best have a good sense of humor since Kroll is unforgiving in his portrayal of his characters who lack any sort of self-awareness.

So as March starts coming in as a lion, I must prepare myself for the finale. But in the meantime, I should focus on the beginning, not the end. We've still got a whole season of ridiculousness ahead of us, courtesy of Mr. Nick Kroll.