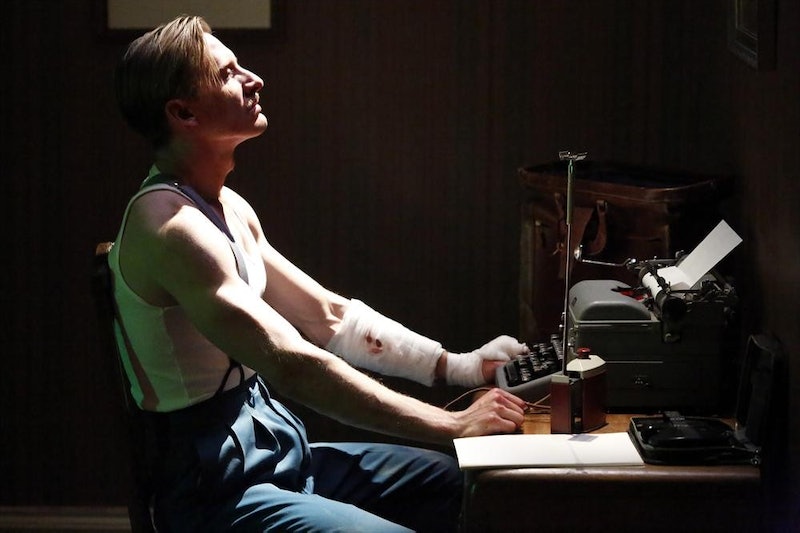 We're only two episodes into Marvel's Agent Carter , and already the greater Marvel theories are beginning to pile up. We know the ultimate outcome for our girl Peggy — she forms S.H.I.E.L.D., becomes badass in every way, etc. — but now we're watching her journey to get there. Along the way, we're bound to run into some foes, if only to get Peggy to where she needs to be that much sooner. The first two episodes introduced us to a mysterious man in a green suit, who, just as IMDb lists him, we shall henceforth simply call Green Suit. So, who is this guy?

Here's what we know so far know about him: he wears a green suit. He killed Peggy's roommate, Colleen. He's apparently not dead, even though he has seemingly been thrown out a window and over a cliff thus far (and still, only two episodes in). According to the Marvel Wiki, he's dead, but yeah, like that's going to stick. Green Suit doesn't have a voice box, but rather a funny Y-shaped scar. Also, he desperately wants Tony Stark's Nitramine, for reasons still unknown.

One key piece of information about Green Suit is that he belongs to the super secret organization Leviathan — which seems to be just like Hydra. While all of this is pretty good to know, it still doesn't bring us closer to figuring out who the guy is.

Considering that Peggy first burned his hand on her stove back at the apartment, and then stabbed his hand while they were fighting atop the moving milk truck, it seems as if this guy and his hand are important. Could there possible be an already established Marvel villain with only one hand?

Oh, if only it were that easy. While Leviathan certainly has its roots in the post-WWII era that Peggy is now living in, I'm going to go ahead and assume that Leviathan member Magdan, a former KGB operative, is not Green Suit. Nor is other Leviathan member, Madame Hydra (who doesn't even BELONG to Hydra). Unfortunately, Leviathan doesn't have a whole laundry list of current and former members, if only because its always been just that darn secret. So, who is this Green Suit guy?

If we look to Agent Carter's big brother, Agents of S.H.I.E.L.D., we'll remember how many mysteries they gave us right off the bat. They gave us Skye, who after a season and a half turned out to be Daisy Johnson. Back in Season 1, would any of us have guessed that outcome? Probably not (unless you're super keen on your obscure Marvel clues). More than likely, that same thing is happening with Green Suit. His big bad origin is hidden somewhere in the comics, but we don't have enough information to figure out his greater story and meaning just yet.

All we've got to go on is the fact that he wears a dapper green suit and appears to not die every time he should — the makings of a great Marvel villain.