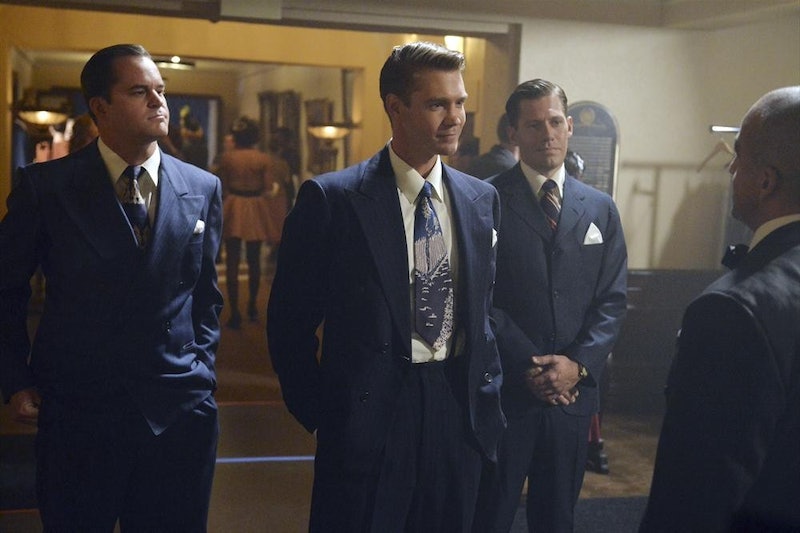 Back before S.H.I.E.L.D., there was a li'l group of crime fighters, comprised solely of humans and not superhumans (that we know of), who made up the Strategic Scientific Reserve, or the SSR. That's where we find our girl Peggy Carter. The thing about Marvel's Agent Carter, though, is that we know how it ends — we know Peggy forms S.H.I.E.L.D., saves the world, helps take down Hydra, etc. The show will probably start setting up for those BIG Marvel reveals now, so first things first: who's going to end up being Hydra on Agent Carter ?

It's not so far out there to assume that there's one double agent already among the SSR. Hydra has basically been around forever, though not always at the forefront of evildoings. They really rose to that position during World War II — with Red Skull — and then secretly operated inside of S.H.I.E.L.D., as Captain America: The Winter Solider and Agents of S.H.I.E.L.D. were so nice to point out. So Hydra is around, lurking somewhere in the shadows. If there's anyone who's going to find them, it's Peggy.

Even though we're only two episodes into Agent Carter, it's never too soon to start speculating as to who the double crosser could be. From the character's we've met so far, who's most likely to be the bad guy?

If you don't secretly really want Chad Michael Murray to turn out to be Hydra, then I don't think we can be friends anymore. Come on, CMM as Jack Thompson is basically a 1940s version of Grant Ward — right down to that smooth charm — so you just know he secretly has to be evil. He's also got a pretty big ego, which would make him a prime candidate to try and achieve world domination through the shady organization.

You've seen Kyle Bornheimer in literally everything (oh here's a small sample: Brooklyn 99, Arrested Development, She's Out of My League, Bachelorette, Party Down, You Again, and the list goes on). He's got one of those lovable personalities, which is probably why he's been cast in everything before. Now on Agent Carter, he seems to be cast as the loveble lug, who gets tasked with all the grunt work of the SSR (like, pulling apart that giant magnetic metal ball). Think he's been pushed around just enough to go and work for the other team? Probably.

Say it isn't so! But yes, Peggy's best ally at the office just might be Hydra. So far we're all rooting for him to end up as Peggy's love interest/future husband because he's so darn sweet. But it would be a surprising twist if he ends up being Hydra. Plus, this would make Peggy feel even more lost and confused, considering that her only friend inside of the SSR turned out to be evil, and probably help push her towards S.H.I.E.L.D.

Angie is Peggy's only gal pal, and seems super hellbent on making sure that Peggy moves in next door to her. Why? If Peggy's the first female hero of S.H.I.E.L.D., then someone's gotta be the first female villain of Hydra.