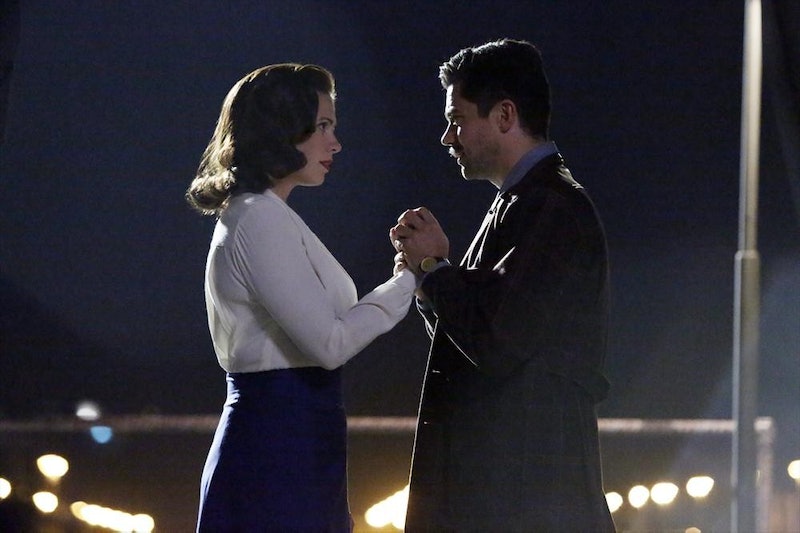 We all know that Iron Man's dad, Howard Stark, is a brilliant inventor. He gave S.H.I.E.L.D., and in part, The Avengers, some of their earliest crime-fighting devices and weaponry. But let's be real: even though we love him, Howard is kind of a little shady. What exactly is he creating that has the government so up in arms? Peggy Carter has been tasked with trying to recover his stolen goods on her new miniseries, so what kind of technology is Stark cooking up on Agent Carter ?

Stark lovingly calls his devices "Bad Babies," which is both cute and a little frightening. To him, they are in fact his babies — they're what he's toiled over for countless hours, and even though they're his precious, they're bad. Like, real bad. Like the fact that Nitramene is highly explosive. But then again, we wouldn't expect anything less from Tony's father.

Nitramene could be called Stark's Bad Bomb Baby. Stark had the directions to make it tucked away in his vault, but as soon as those files were stolen from him, it was mass produced (as we saw in the dairy truck that exploded into a million little pieces). Another thing to note about Nitramene is the fact that it emits Vita Radiation. That term might mean nothing to you, but it means everything to Steve Rogers — that type of radiation is used for rapid growth, and was used in Project Rebirth, aka the experiment that gave us Captain America.

Clearly, this is not something that should be falling into the wrong hands.

Little else is known about what other kind of inventions Stark had hidden underneath his mansion. As he told Peggy, he knows they're bad, but he can't stop himself from creating them — though he can stop them from falling into the wrong hands. There's a good chance Peggy's race to collect all of these Bad Babies will play out through the course of the series.

Nitramene might not even be the worst of his inventions, it just happens to be be the Bad Baby of the week that Peggy needs to track down. And if this one isn't the worst, and it's basically a bomb, what else has Stark been up to? And how much do you want to bet that he's also got a little piece of an Obelisk hidden in his basement?

But seriously, a CAR PHONE.