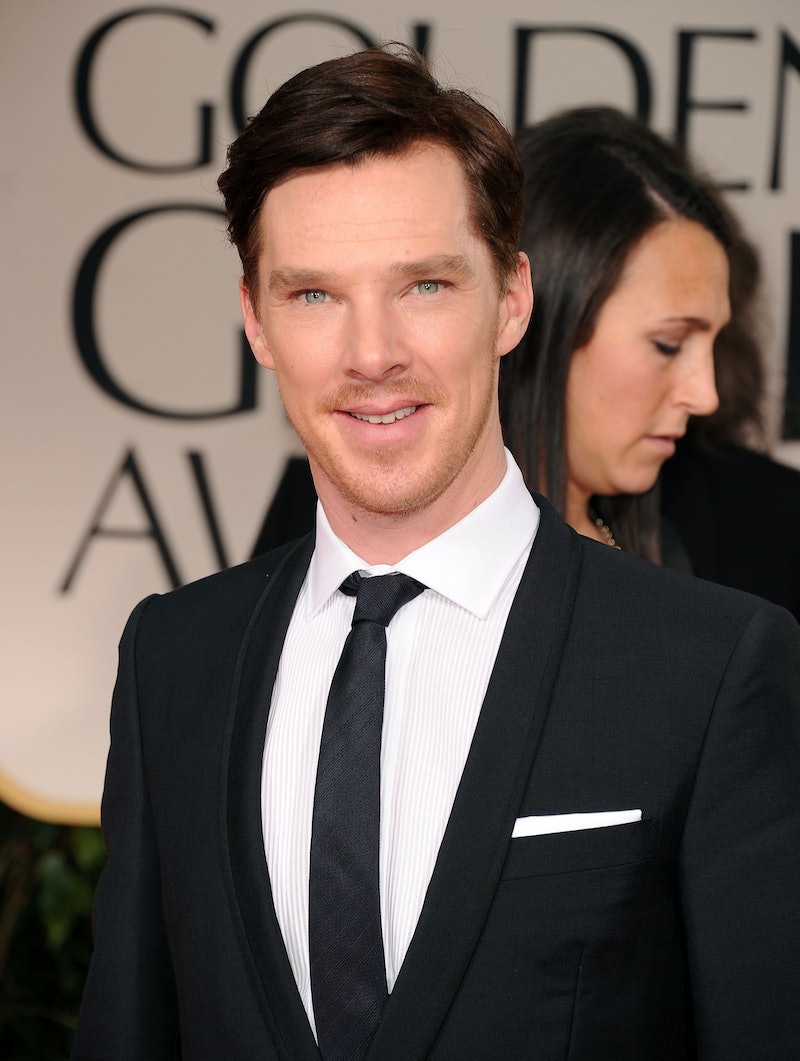 Is it just me or was there a clear VIP of the 72nd Golden Globes on Sunday night? No, I'm not talking about Tina Fey and Amy Poehler — they were incredible but disappeared halfway through the telecast, leading many to get upset at the lack of their perfection onscreen. I'm actually speaking of heartthrob, Internet breaker, and Tumblr and fandom subject Benedict Cumberbatch. With some awesome moments early in the Globes ceremony, Cumberbatch melted my cold, cold heart by being adorably memorable and hilarious as per usual. Cumberbatch easily ruled the Golden Globes, aside from the winners and hosts of course.

Unsurprisingly, it seems like Cumberbatch is really winning and ruling in real life as well. Though he did not win a Golden Globe for his incredible work as Alan Turing in The Imitation Game — that honor went to another deserving Brit, Eddie Redmayne for The Theory of Everything — Cumberbatch got engaged in the most adorable way at the end of 2014 and, recently, he and his fiancée confirmed that they were also expecting a child. Plus, he consistently works on great projects and a Sherlock return is coming soon. If that's not winning in real life, nothing is. But here are his four best moments at the Golden Globes that proves Cumberfans are justified in their crazy love for Cumberbatch.

Fey and Poehler decided to pick a "random" celebrity to co-present the first award of the night with Jennifer Aniston and the person they landed on was Cumberbatch where he made the above adorable face as if he had won the most amazing honor. Plus, any combination of Fey, Poehler, and Cumberbatch is the best thing ever. Oscar trio of hosts 2016?

2. He Then Promptly & Adorably Messes Up While Presenting

Then, when Cumberbatch made it onstage with Aniston, the duo seemed to be completely out of sync as they tried to present their award. But instead of being awkward and uncomfortable to watch, the flub kind of worked in their favor — it made sense that they would mess up since Cumberbatch supposedly had no idea he would be presenting.

A Cumberbatch photobomb shouldn't be that big of a surprise, but it's definitely still entertaining to watch. During a pretty funny and also slightly awkward joke about North Korea featuring the awesome Margaret Cho, Cumberbatch photobombed Cho in her North Korean get-up while she took a picture with Meryl Streep taken by Michael Keaton. It was pretty priceless.

Another Brit dreamboat, Colin Firth came onstage to present Best Picture Drama nominee The Imitation Game to the audience and lamented that he wanted to play the role of Alan Turing many years prior but that the filmmakers and producers were waiting for Benedict Cumberbatch... to be born. Cut to an adorable Cumberbatch laugh, and me wishing that all British dreamboats get together and just poke fun at each other while having shirtless pillow fights. Hey, a girl can dream. Unfortunately the video is unavailable at the moment but just imagine it guys, it was adorable.

5. Cumberbatch Is Adorably Nervous During His Best Actor Category

The Cumberserious face made an appearance at the Globe telecast on Sunday night as Cumberbatch's name was read out by Gwenyth Paltrow who announced the winner of Best Actor in a Drama. He looked thoroughly nervous and tried to crack a smile but he couldn't make it happen. When Eddie Redmayne's name was called and the actor took to the stage, Cumberbatch looked content with his fellow Brit winning the award. What a class act.