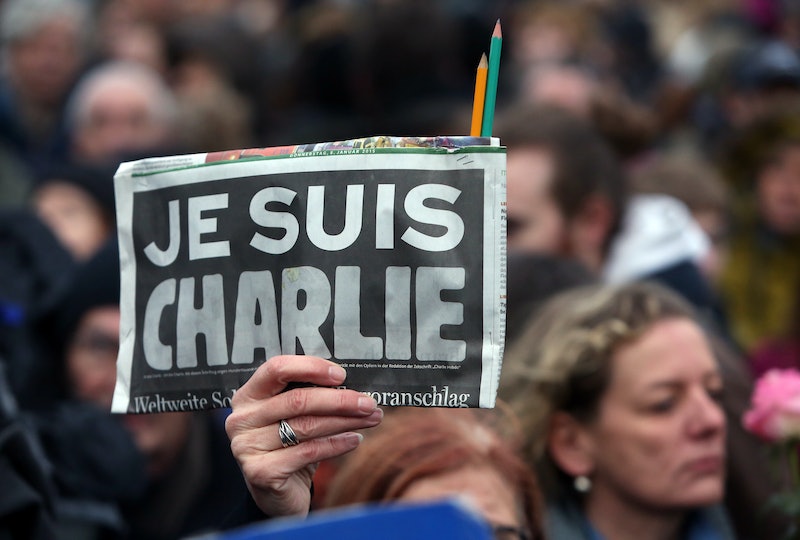 In case you were too swept up with the glitz and the glam that was the Golden Globes on Sunday night, and didn't catch Judd Apatow's long-awaited Simpsons episode, you might have missed an extremely powerful message that accompanied the episode's final moments. Similar to what we've been seeing on the red carpet of the Globes, and on the stage during George Clooney's speech, The Simpsons ended their episode with a Charlie Hebdo tribute.

The episode, which was written by Judd Apatow 24 years ago as a spec script, finally made its debut on Sunday night. The episode itself was about a hypnotized Homer who believes he is just a boy, but it wasn't as much about the episode as it was about the message that the show added at the end of the episode. Standing with millions of others who marched on Sunday in the name of freedom of expression, The Simpsons episode showed a virtual tribute with Maggie Simpson holding up a sign that read "Je Suis Charlie," or "I am Charlie," a popular slogan for the fight against the terrorist attacks at Charlie Hebdo.

Sunday was a big day for those that spoke out on the attack in Paris. At the Golden Globes, many celebrities paid tribute to the terrorist attacks — some held signs during the red carpet, others incorporated the message into their speeches. There was also many marches and protests around the world, with more than a million people fighting to honor the freedom of expression.