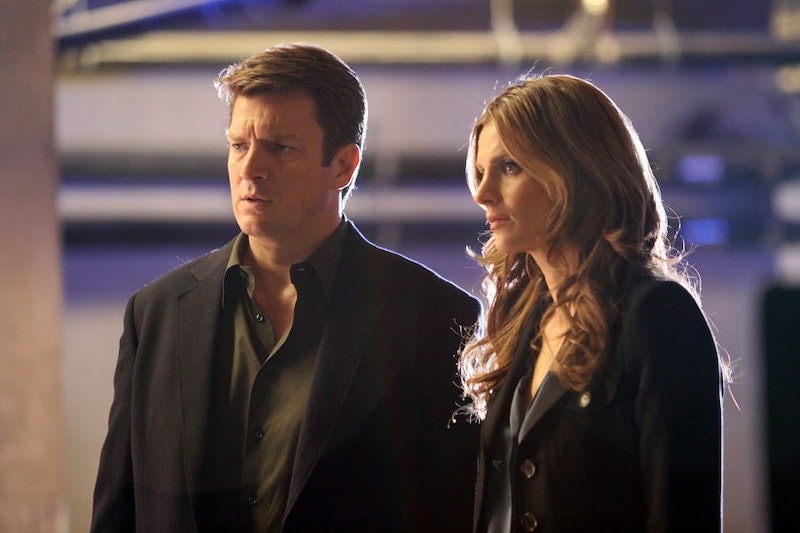 Remember back in the fall when Richard Castle, of Castle , was MIA for his wedding to Beckett and audiences were left twiddling their thumbs waiting to find out where the hell he went for those two fictional months? Well, I'm still twiddling my thumbs waiting for a reason behind that mystery. Usually the show is pretty good about wrapping larger mysteries like this up — although I'm still expecting 3XK to come back at some point — but this mystery might just be one unfinished mystery that viewers might have to accept, because there's a good chance we may never know what happened to Castle.

It all started when Castle's car was found burning in a ditch at the end of Season 6 of Castle. He was supposed to be on his way to his wedding, but of course we can't have nice things on this show, so the Caskett wedding was going to need to jump through a few more hoops to reach marital bliss. In the first two episodes of Season 7 of Castle, Beckett and the recently found Castle fought to prove that something big was happening surrounding Castle's disappearance. But we never found out what that "something big" was, and we may never find out. Here's the four reasons why Castle's disappearance could forever be unanswered:

The Caskett wedding was the one thing that was largely affected when Castle went MIA. So because the wedding happened, and these two are blissfully man and wife, does that mean there isn't the urgency to discover where Castle went when he disappeared for two months?

Castle was Told to Stop Looking

In the second episode of Season 7, Castle was lead to Montreal where he discovered a man who told him he was drugged to not remember what happened during The Forgotten Time. How did Castle know he could trust this guy? No-memory Castle told mystery man a very personal thing, that only he knew, to give this mystery man some credit. Castle wonders what it was that happened that led him to ask for his memory to be wiped, but ultimately decides some things aren't worth learning. THAT DOESN'T WORK FOR ME, THOUGH.

We Would Know Where He Was by Now

So if we were going to learn what happened to Castle, we would probably have learned it by now, right? The show wouldn't wait four months — or longer — to finish up a mystery that some might have forgotten about, would they? Because I'm never going to forget Castle producers... I'm never going to forget. If you don't address it, consider yourself plagued with spec scripts, written by yours truly, to get to the bottom of the mystery.

Seriously, everyone on this show has a IDGAF attitude about Castle's disappearance that just isn't working with me. Since when is this crew one to just sit back and relax and not finish a mystery?

More like this
'Games of Thrones' Fans May Recognise This 'Conversations With Friends' Location
By El Hunt
50 Years After Creating Her Alter Ego, Angelyne Is Still Driving That Pink Convertible
By Gretchen Smail
Here’s Everything Coming To & Leaving Netflix In June
By Alyssa Lapid
Britney Spears Met The Weeknd & Sam Levinson, So She May Actually Be On 'The Idol'
By Jake Viswanath
Get Even More From Bustle — Sign Up For The Newsletter