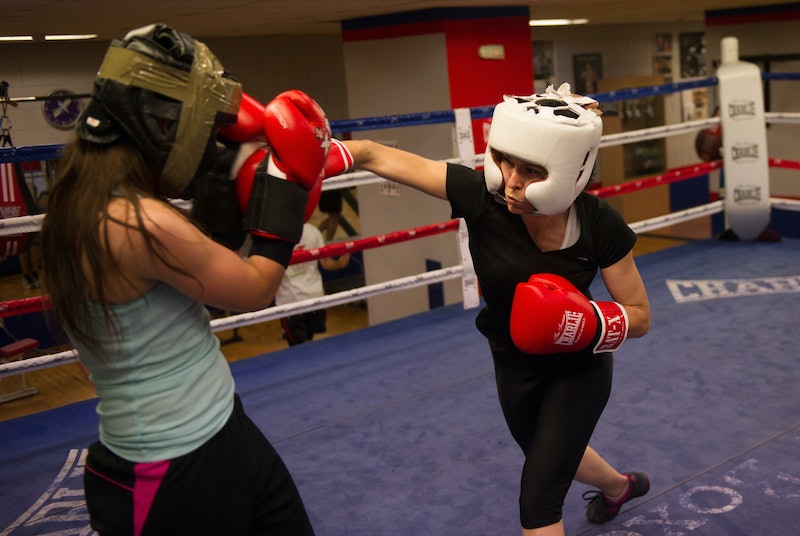 The confetti has been swept up, the party hats shredded, and the last dregs of champagne poured wistfully down the drain; it's officially the third week of 2015. And every person who made virtuous promises as the clock struck midnight on New Year's Eve is entering the period where resolutions become either smug successes or shamefully forgotten. But if you're still hanging on, tenaciously, to your New Years ideas like a sloth to a breaking tree branch, here's a tip: it's all mental. Changing your habits doesn't have to be an uphill struggle if you know a few tricks to ease the process.

I don't blame you if you're rolling your eyes at this bit. Every year, we seem to hear some new idea, some skip-the-hard-work genius scheme, that will miraculously trip our brains into high gear and turn us instantly into dedicated exercisers who don't smoke or bite our nails and read 10 books a week. Hypnosis! Positive thinking! Expensive personal trainers named Sven!

News flash: it's not going to happen. There is no quick fix (not even Sven). But the human brain is an interesting thing — structuring your resolutions in certain ways will give you a serious psychological edge. So keep pushing, incorporate these ideas, and you might just be the one looking horribly self-satisfied on New Year's Eve 2015.

Be Specific About Your Goals

The resolution "I will lose weight" is, it turns out, a hell of a lot less likely to get you anywhere than "I will lose 5 pounds by X date." Ditto "I will read these books by the end of this month," as opposed to "I will read more stuff so my mates don't think I'm an uncultured dolt." It's no secret that the human brain thrives on specifics; keeping things precise is a big part of all those motivational manuals featuring terrifyingly white-toothed people on the cover.

One of the more scientific of said manuals, Dr. Heidi Grant Halvorson's Nine Things Successful People Do Differently , is intent on making us think about our goals differently: less wishy-washy, more to-the-decimal-point. It looks more terrifying, but actually it makes life easier. Why? Because there's no room for misinterpretation, and it's far easier to track your success.

This is often used to talk about weight loss, but it's actually a valuable tool in reaching any goal. Incremental steps are easier to contemplate than huge things that won't be achieved until far in the future: they're less scary.

It's all about cheating your giving-up thought process. You're far more likely to wimp out on climbing Everest ("It's too hiiiiiigh, I'll just sit here and eat Oreos") than you are to give up on climbing your compost heap. It also means you'll enjoy the process more than just striving towards a horrible, unspeakably distant goal. Just keep swimming, as Dory says; but think about it in single pool laps, not the ocean floor.

I hate this one, but it's true: the American Psychological Association says that if you share the fact that you're trying to do something (write a book, quit smoking, learn how to play the mandolin) with others, you're more likely to stick to it. Mostly because you don't want to look bad, but also because you'll be encouraged.

Personally, this idea gives me hives. Running around the block with some morbidly cheerful friend who won't take "but all my gym socks are dirty" as an excuse sounds like a very specific type of torture. I'm a suffer-in-silence type. If you can stand it, though, get to it.

This can be radically hard work if all your friends are smokers/Pokemon trainers/professional trampolinists, but a few changes in lifestyle will, science says, make shifting habits easier than simply telling yourself "No no no" while all around you people are doing splits mid-air with abandon. (OK, metaphor over.)

Be Optimistic — But Realistic

Realistic optimism is another one of Dr. Grant Halvorson's recommendations that's become a buzzword in industries focussing on social change. It's about believing you'll achieve something, but also acknowledging the likely challenges that will sit in your way. It's a rational variation of that blissful Secret nonsense which says the power of wanting something really, really badly will bring it to you, because we are all still five and Santa still exists. Being positive about getting to your goal is great, but it needs to be tempered with some down-to-earth thinking about how hard it's going to be.

This can expose some pretty serious flaws in your resolutions, too. Say, "I want legs like Taylor Swift's by Christmas, and the challenges that stand in my way include insufficient time to spend hours in New York gyms, being resolutely pear-shaped genetically, and generally not being Taylor Swift." If the challenges start to look completely ridiculous, maybe you should reevaluate to a more realistic goal? Maybe? (Unless you are actually Taylor Swift, in which case, 1989 was great for you and your cats are cute.)

Focus on Doing, Not Not Doing

We humans don't like being deprived. We as a species will do whatever it is we are told deliberately not to do. So phrasing a resolution as "I will NOT do such-and-such" is setting yourself up for failure. Amy Cuddy, a social psychologist at Harvard Business School, has even said publicly that New Year's Resolutions are bad ideas, precisely because they encourage this kind of negative, don't-do-it thinking. There are some cases where this is kind of impossible, like giving up smoking or calling your ex-boyfriend while drunk, but even those resolutions can be phrased as "have healthier lungs" or "better phone etiquette."

It's actually not too hard. Instead of focussing on not eating XYZ, focus on eating ABC instead; instead of less lazing about, focus on more exercise. Shifting the idea from deprivation to new experiences is a way to try and weed the old way of life out of your brain.

Don't Beat Yourself Up

Oh my god, you failed? You fell off the wagon and ate six Krispy Kremes/ignored your gym session/caught a Jigglypuff/texted your horrible ex with Taylor Swift lyrics? You monster. Go outside and eat worms.

Or don't. Adopting a healthy attitude towards small failures is one of the key psychological stories behind success. Pick yourself up, dust yourself off, and start again. And booyah, many small failures and small successes later, you will have yourself an achievement.

Or you won't. Either way, you're a worthwhile person.