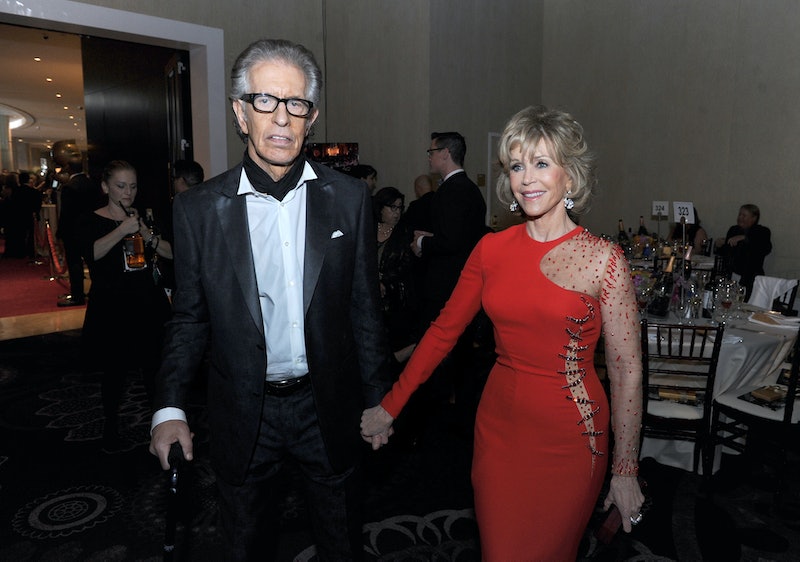 Sunday, January 11, the world was glued to their televisions between the hours of 8 p.m. and 11 p.m. for the 2015 Golden Globes award ceremony. Despite the fact that Selma did not received the recognition the film so completely deserved, and despite the fact that Benedict Cumberbatch lost Best Actor to Eddie Redmayne (well deserved, but still...), overall the Golden Globes were refreshingly feminist, appropriately (and inappropriately) hilarious, and brought tears to many an eye. However, not all was fun and games at the award show. In a terrifying twist, it's being reported that Jane Fonda's boyfriend Richard Perry passed out during the ceremony.

According to USA Today, someone had to call the paramedics after Perry passed out at the table he was sharing with Fonda, Sienna Miller, Mark Ruffalo, and Channing Tatum. However, the call to the paramedics was cancelled before they even arrived — and Fonda's representative revealed that the man in question was not, in fact, her boyfriend, but an unidentified man at another table. Thankfully, Hollywood Foreign Press Association President Theo Kingma was quoted as saying that the man had passed out because he was overheated from sitting under the burning lights, and that the man was all right without requiring further medical attention. But there's more than one reason to be thankful about how this all went down.

In the first place, this scary moment happened just before Fonda was due to get on stage to present the award for Best Actor in a TV Series; as much as I would have admired her "the show must go on attitude," I would have been devastated to find out that Fonda had forced herself to do her bit while worrying about her beau and the incoming paramedics. In the second place, even if it wasn't Perry who passed out under those hot lights at the ceremony, it's a huge relief that the man who actually passed out was A-OK and didn't need to be taken to the hospital. The Golden Globes are a time of merriment, hilarity, and a bit too much drinking, after all — no one should have to spend that time in the hospital.

Thankfully, USA Today also reports that Fonda was seen holding Perry's hand after her presentation, and the couple appeared to be just fine. Thus, as terrifying as this moment is to hear about, everything ended well enough for the Globes to go off without further interruption or mishap — or so we can hope. Considering this moment didn't make it onto the live television broadcast, it still remains to be seen what else happened during the ceremony that the audience at home might have missed the first time around.