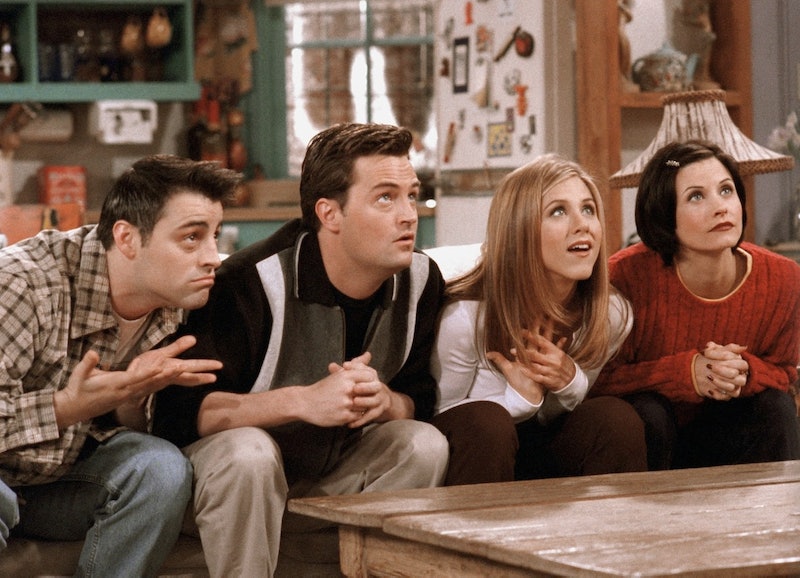 I've been watching too much Friends since Netflix released the entire series to their service on New Year's Day. Okay, I've been watching too much Friends my entire life, but 6 seasons in less than two weeks has been something of a binge. And full disclosure: I don't actually believe there's any such thing as "too much Friends". It's just something people say to me in passing, like, "Kat I'm starting to get really worried about you, you're watching way too much Friends and I think it's starting to effect your personal, social and work life." To which I reply by holding up my balled fists at face height and beating them together. Oh, you don't know what that means, Judgey McHolierThanThou? Maybe someone isn't watching enough Friends.

If you know what I mean then you too might be suffering from this illness the clearly ignorant are referring to as "too much Friends". Suspending disbelief briefly, maybe we can concede that yes, our personalities might undergo some barely detectable shift as a result of watching so much Friends in such a short period of time. I mean, could we be any more obsessed with Friends? Maybe you're starting to adopt Friends lingo into your every day speech. Perhaps you bought a sweater vest. Maybe you've thrown a mug of coffee across the room because the cup was TOO GODDAMN SMALL. I don't know. I don't know your life. I do know that if any of these things ring true, then maybe it's time to take a break from Friends. At least for an half an hour or so to fit in some new Parks & Rec or Mindy Project. Then you can go back to Friends.

Most people will vaguely identify with one of the six Friends. I'm a Monica. When you're watching too much Friends, you'll start (either consciously or subconsciously) exacerbating the similar characteristics in your personality. Or it's a Baader-Meinhof thing and you'll begin seeing even more of that character in yourself. Like every time I do something even slightly Monica-ish, my boyfriend looks at me with that knowing "you're such a Monica" look.

2. You laugh before the joke is actually said

A sure sign that you're watching too much Friends and are therefore overly familiar with Friends is when you start laughing before the joke is even said. When you not only anticipate the funny but also are able to laugh at your inherent memory of the funny, then you've become some sort of very strange new kind of bi-polar in which your personality is split between real world and Friends world, and you should back off a little to let your sense of reality even out.

3. You can quote full episodes

It's not just that you preemptively laughing at jokes—you have the ABILITY TO RECITE ENTIRE SCRIPTS. Go outside. Take a walk. Be with the three-dimensional people.

4. You start really enunciating "be" in sentences

Could you be anymore Chandler? One you start taking on the intonation of Chandler's speech, you know you've gone too far down the rabbit hole. ABORT. ABORT.

Unfortunately, I do this to my boyfriend a lot. It's cheesy and awful but I can't stop. If you say "How you doin'?" in any context, ever, it's time to shut it down. Adopting catch phrases from Friends isn't as cute as it was 20 years ago, and even then, it was only cute because you were a kid and adults love laughing at kids saying things they don't really understand.

6. You fill silences with scene-joining music

When you start segue-ing between conversation topics with a twangy "ba-da-ba-ba-ba", like the music in the scene transitions between Friends, you know you've got a problem. It's like when you used to be a teenager and talk on MSN Messenger, then you'd go to bed and still hear the little notification noise in your head even though it was totally silent.

7. You know the official title of every episode

If you call episodes "The one where..." but don't make up the rest of that sentence and actually say the correct name of the episode, I hate to say it, but you've officially filled your brain with useless crap. That brain space could have been used for something important, like facts about the world or maths or news. Congratulations, the core of your knowledge basis is essentially irrelevant.

8. You start to feel like these people are your actual friends

There's something weird about being a Friends fan that I don't think corresponds with any other sort of sitcom fandom, and that's that you feel like Rachel, Monica, Chandler, Joey, Ross and Phoebe are your ACTUAL, real life friends. You watch Friends and when one of the characters does something, you'll smugly say things like, "That's such a Joey thing to do!" Because you know, on account of your personal, intimate relationships with them, just what they would do. This is essentially very unhealthy, but if you're any kind of real Friends fan, you don't care, because you know you're not a Friends fan at all, you're actually the SEVENTH FRIEND AND THE SEVENTH FRIEND HAS NOTHING TO BE ASHAMED OF.

9. You shout Friends quotes in relevant (and sometimes irrelevant) social scenarios and laugh uncontrollably even though no one else gets what's going on.

Yesterday my friend's sister told a story about not being able to get her couch up some stairs. I started laughing like a coyote and yelling, "Pivot!" I kept doing it even though everyone was staring at me with blank faces. You know you watch too much Friends when you can use quotes from the show that actually relate to the things going on in the real world—and you know it's time to stop when you're the only one who gets any joy from that.

10. You get into really passionate, heated arguments about the geography of where Central Perk is and where all the characters live

I don't know about you but I'm really upset about the geography of Friends. Apparently, Monica, Rachel, Joey and Chandler live "in the Village", but when Ross is going to move to the Upper West Side, that's "three trains away!" WHAT IS EVEN THREE TRAINS AWAY FROM ANYTHING IN MANHATTAN? And Phoebe lives "far away" and yet is always at Monica's apartment first thing in the morning. WHAT TIME DOES PHOEBE WAKE UP IN THE MORNING, IT MUST BE LIKE 4AM.

Ben is a helpless child who is mostly neglected by his father. And yet somehow, he really pisses you off. Once you find yourself getting annoyed by Ben's presence (a cute kid who has done nothing to earn your hatred) (other that being totally boring) you've exceeded the realm of "too much Friends" and completely fried your brain. There's no going back for you now.