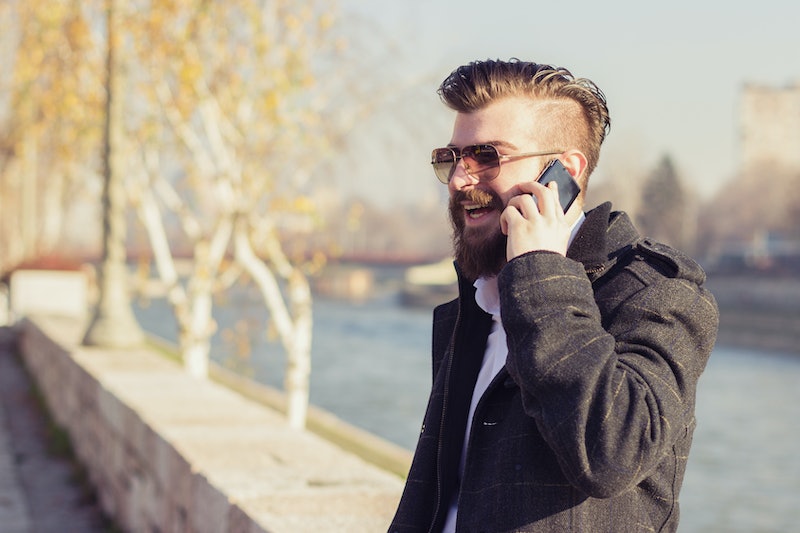 Everyone's phone contact list is filled with tons of pointless numbers you never need to call — former coworkers, former neighbors, some guy you bought furniture from on Craigslist — that are simply taking up space. But this is especially true of most of your exes and past hookups in your contact list. And what better time to get rid of them than the present?

Especially because around this time of year — aka the oft-horrendous two-month lead up to Valentine's Day — your smartphone can become a high-tech Mistake Machine, allowing you to quickly (and, let's be honest, probably drunkenly) make unfortunate romantic and sexual decisions that will take at least til mid-March to undo. And you've got better stuff to do in March! It's Women's History Month, and it has St. Patrick's Day, Daylight Savings, Purim, and World Kidney Day in it. So you'll already have a lot on your plate. Don't add to it by getting into a panic-based fake relationship with someone whose Facebook posts you mock to your friends the other 11 months of the year.

So make the decision to delete these contacts from your phone today. Because if they're still in there on February 14th, neither I nor Stoli nor the TBS programmer who keeps running Ghost is responsible for what may happen next.

The Person You Had an Extremely Intense Sexual Encounter with in 2013 ... and Then Never Heard From Again

Your Rationale for Keeping Their Number: You met at a salsa bar, or a salsa tasting party, or one of those other random things you did that one week when you were trying to be more "spontaneous." You did thrilling, depraved things to each other all night long, and then never called or texted each other. And yet ... well, why wouldn't they be interested in a text suggesting that you guys do recreate that thing you did on the ping-pong table?

Reason to Delete: They have probably moved to Ibiza by now. Sorry, that's just the life of a smoldering sex god. Accept it, be grateful for the good time you had, and move on.

Your Rationale for Keeping Their Number: Third time's the charm, right? Or the fourth time. Or whichever time you two are on right now.

Reason to Delete: Especially around V-Day, it can be tempting to pair up with whoever is around — even if the only person around is someone whom you spent all of November screaming at about fidelity and honesty and who paid for most of that Xbox. Valentine's Day is the serial get-back-together-er's favorite time of year to lure you back in, so delete now, and you'll get to pull a stone-cold "New phone, who is this?" when they text you on February 13th.

Your College Ex Whom You Haven't Spoken To in Years

Your Rationale for Keeping Their Number: Yeah, yeah, so Facebook says they're married and blissfully in love and maybe trying to have a baby. But, I mean, in this crazy world, who even knows what that means, right? And we had such an amicable break-up ... and the divorce rates are really, really high in this country. I'd be a fool not to keep in touch. Plus, uh, I mean, we're friends?!

Reason to Delete: You guys had a window to stay friends, and that window has closed. If they have a midlife crisis in 15 years and want to recreate your glory days of beer pong and sex in the back of a 2006 Geo Metro, they'll let you know.

Your Rationale for Keeping Their Number: Hey, this friend is NOT just secretly trying to get into your pants! Everyone sometimes gets so drunk off of two beers that they massage your shoulders and then whisper that they've been in love with you since the day they met you and that your hair smells like cake and a world without pain. It's just a normal part of the holiday party season!

Reason to Delete: If you cannot imagine ever getting with this person, you need to cut it off. There are plenty of people out there who want to support you emotionally and go see Wild with you, who don't also spend all their downtime picturing you doing the yoga part from the "Anaconda" video.

The Ex That You Screwed Over

Your Rationale for Keeping Their Number: This time, you were the bad guy. The very, very bad guy. And now that you've grown and matured, you really want to apologize and make things right. Like, soon. Like, not today soon, but soon.

Reason to Delete: This ex has either totally gotten over you and wouldn't even care about an apology at this point ... or still spends their days praying that you choke to death on some Grape-Nuts. Either way, they're not hanging around, waiting to absolve you via text. If you want to feel closure, go write in your diary.

The One That Got Away

Reason to Delete: The only reason this person seems like the perfect partner is because you haven't spoken to them in three years. The "one that got away" is a myth that allows us to hang around feeling down on ourselves, instead of going forth into the world and meeting new people to send carefully selected emojis to.

Your Rationale for Keeping Their Number: Sparks never flew between you two — you mostly just had the same taste in movies and liked your hot wings at the same level of spiciness ("medium"). But you got along fine, things ended on good terms, you're pleasant to each other whenever you run into each other ... and hey, if the clock started ticking, and you really had no other options, your kids would have very symmetrical facial features, and would probably also enjoy "medium" spicy hot wings.

Reason to Delete: You couldn't stand to hang around this person for six months. How are you going to do it for 60 years? The idea that you need a "back-up" that you can "settle" for is one of the darkest dating fallacies out there. It exists just to scare people and keep them from making their own dating decisions that are right for them. Don't buy into it.

The Ex Who Destroyed You Emotionally

for Keeping Their Number: Someday, you'll text them, just to show them how much you're over them and totally don't even care any more. And then they'll HAVE to take you back. Oh sh*t, did you just say that last part out loud?Reason to Delete: Hey, remember that part where this ex destroyed you emotionally? It wasn't because "he was going through a weird thing with his mom," it wasn't because "she was having a rough patch at work," it wasn't because "the Packers were just having a really bad season." This person destroyed you emotionally because they're a destructive jerk, and even if they're capable of having an emotionally successful relationship with someone, it's not gonna be you.

The Person Whose Name You're Not Quite Sure of

Your Rationale for Keeping Their Number: You hit it off enough to exchange numbers! I mean, that's rare enough, right? You must have had some chemistry, even if you had gone a little too heavy on the Fireball earlier in the night to remember the exact details of said chemistry.

Reason to Delete: If things were going to work out with "Blue eyes L train," "Bartender bar with Star Trek pinball machine," or "Ted/ Brad/Thad??", they would have by now. Sorry.

Your Rationale for Keeping Their Number: Sometimes, you need the comfort of human touch, and Drunk Hook-Up Partners #1 and #2 are asleep or sleeping with someone else or DJing in Europe, or working the midnight shift at the box factory or something.

Reason to Delete: Come on. If the first two are out of commission, use your damn hand. You don't need to feel the warm flesh of another human being this badly — especially after you wake up the next day and remember why this person is #3 in your rotation (they live in an apartment the contains only a mattress, a mini-fridge, and a DVD box set of Caroline in the City).

for Keeping Their Number: Your friend and this person, like, barely dated. Plus, it's been so long, so much longer than they dated, that it's like they never dated at all. Isn't that one of those romantic equations people use? Like, if they've been broken up for three times as long as they were together, it's like they never even knew each other, and now I can have sex with my friend's ex!Reason to Delete: Like a broken clock, even Gretchen Wieners is right sometimes. It's not worth the drama to hook up with a friend's ex. Plus, after the buzz of the taboo wears off, you're stuck with an emotionally withholding doofus who cheats at Skeeball. Remember, there was a reason that they broke up.