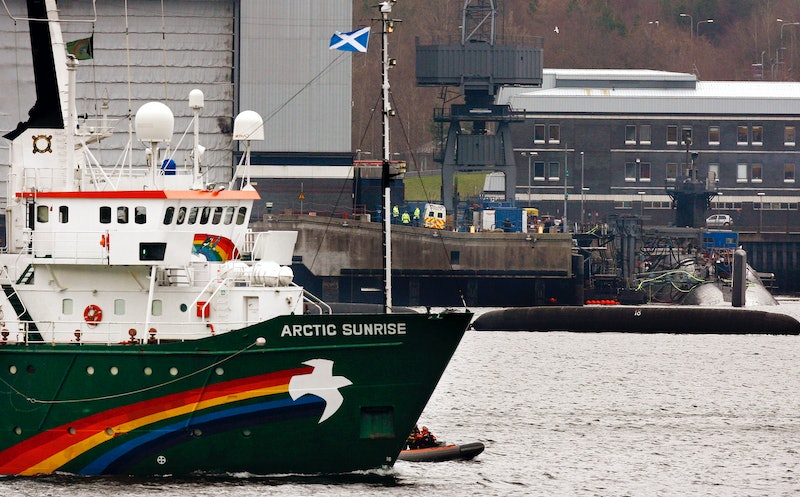 Several passengers of the Greenpeace ship Arctic Sunrise will be held for up to two months after a protest at the Prirazlomnaya oil platform, a court in the Russian city of Murmansk ruled today. The ship was towed when the arrests were made. Two activists from the ship scaled the oil platform on September 18 to protest drilling for oil in the Arctic. A day later, the whole crew – largely international, with a handful of Russian citizens – was arrested, though some were released within a few days. They were expected to be prosecuted under piracy charges.

According to Russian news agency RIA, one of the detainees is a photographer, Denis Sinyakov, who was on assignment for the news website Lenta.ru. Greenpeace tweeted that Sinyakov said, “My criminal activity is journalism. I will continue to report.”

The captain of the ship, U.S. citizen Peter Willcox, is also among those detained.

A spokesman for Gazprom, a state-owned company that owns the oil rig in question, said that the Greenpeace action was particularly dangerous given his the conditions the rig’s crew works under in the Arctic. “Any violation of the norms can lead to catastrophe,” Sergei Kupriyanov told Ekho Moskvy radio.

On Wednesday, Russian President Vladimir Putin said that it “is perfectly obvious that they are no pirates,” but that “against the background of the bloody events that were taking place in Kenya,” Russian authorities have to be careful. (The action actually took place a few days before the attack in Kenya.)

Putin’s statement came as a relief — the piracy statute carries a maximum prison sentence of 15 years, nothing to joke about in a country that has been doling out harsh sentences to dissidents.

The city of Murmansk is, ironically, the same city where four Dutch citizens were detained for violating Russia’s gay propaganda law in July.

Meanwhile, activists from the Russian protest group Pussy Riot are also making headlines this week. One member of the group, Nadezhda Tolokonnikova, is on a hunger strike to protest overly harsh working conditions. The sentence appeal of Maria Alyokhina, the other still-imprisoned member of the group, was delayed today after the judge ruled that the court needed at least two weeks to reach out to the victims of the group’s actions and invite them to attend the court proceedings. A journalist from progressive Russian TV channel Rain reached two of the three aggrieved parties by phone. Both said that as Christians, they had already forgiven Alyokhina, and one said that he is open to her getting an early release.

We'll see if the judge gets the memo.