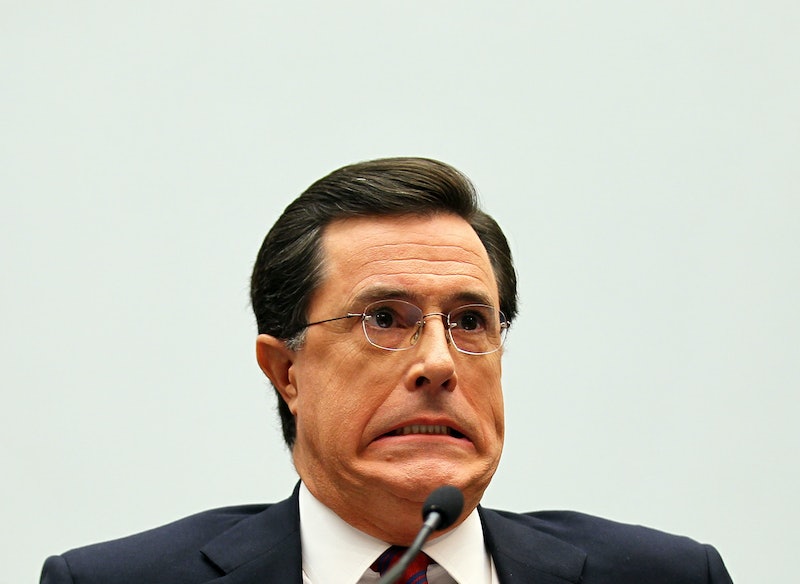 We finally have a date, folks — an actual specific date that we can circle on our calendars that will mark Stephen Colbert's return to our televisions. I think 10 months is a big enough stretch of time to be called "long-awaited," so let's throw that descriptor in there, too. So when does Colbert make his Late Show debut? The Television Critics Association's winter press tour has our answer, and that answer is Sept. 8, 2015. But what will that show look like once it finally graces us with its presence?

CBS Chairman Nina Tassler's the one who made the reveal at the TCA Monday, with Colbert commenting on what Letterman's May 20 departure from The Late Show means for the former/eternal Colbert Report host: "I have nine months to make a show, just like a baby. So first, I should find out how you make a baby."

Deadline reports that Tassler also made note that "almost everyone" from the Colbert Report staff will be making the transition with Colbert, which is a good sign for those of use who started mourning the loss of the Comedy Central show the second the Late Show news was announced last year. We won't get that legendary character back, but the people responsible for Colbert Report's endless insights will still be hanging around with their old boss.

As for what CBS will be doing to fill that long gap between hosts? According to HitFix's relaying of Tassler's answer, instead of The Late Show, the network will run encores of its scripted primetime shows. And once those are through with? Tassler said that Colbert's take on the network late night gig "will be parts traditional, though some things he would want to do differently. He is putting a lot of attention on the show, which he still wants to be topical, relevant and dealing with current events."

We wouldn't have it any other way. Do your thing, Colbert.

More like this
Watch Benedict Cumberbatch Lead An ‘SNL’ Medieval History Lesson On Roe v. Wade
By Grace Wehniainen
20 Photos From The 'Stranger Things' Season 4 Premiere To Make You Feel Old
By Alyssa Lapid
Everything To Know About A Million Little Things' Reported Final Season
By Brad Witter
The 'P-Valley' Season 2 Trailer Teases A Major Shakeup At The Pynk
By Johnny Brayson
Get Even More From Bustle — Sign Up For The Newsletter