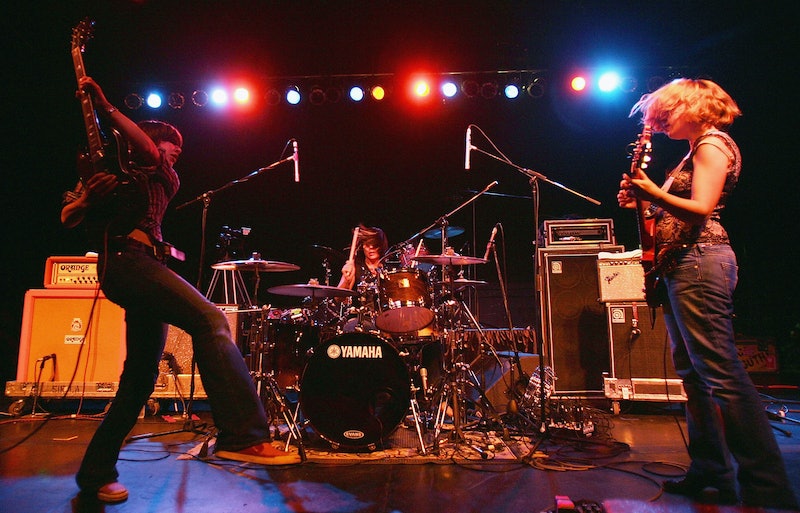 Have your flannel shirt at the ready, because it's 1995 all over again: Sunday night the new Sleater-Kinney record No Cities to Love hit the Internet. Now available to stream on NPR before it drops on January 20, the album that marks the triumphant return of dual guitarists Corin Tucker, Carrie Brownstein and drummer Janet Weiss. And sure enough it's a splendid return to form, as their voices more than ever echo with a message of empowerment.

Of course, Sleater-Kinney was boldly at the forefront of the riot grrrl movement of the '90s, having a powerful feminist message was always a part of the band's M.O. And while I can't entirely decipher what every song is about specifically — and I gladly invite them over to explain it to me over tea — it genuinely feels as though their battle cry is louder than ever. And this is important in an era where feminism is thoroughly prevalent, but simultaneously muddled: let's never forget Tucker's cynical lamentations off "#1 Must Have," which decries a world that commodifies their ideals into "girl power dot com." Through the distorted fuzz, you can really hear lyrics that embody the strength of survival, and it's something that every woman should tune into.

The dream of the '90s is real with Sleater-Kinney. Let these lyrics inspire and empower you.

"I feel so much stronger now that you're here/ We've got so much do let me make that clear."

The perfect song for a band re-united, really. Whether you're fighting against sexism or just trying to get through the day, the best battles are fought together, not apart. The subsequent chorus asserts this:

From "A New Wave"

"No one here is taking notice/ No outline will ever hold us/ It's not a new wave/ It's just you and me/ Eyes are the only witness/ That will prove we ever lived this/ Invent our own kind of obscurity."

It's hard to say what the theoretical, imaginary "new wave" is referring to. Is it the third wave of feminism that coincided with the rise of the riot grrrls? Or is it the current wave of "feminism" that's woven its way into today's pop starlets? Either way, the lyrics encourage us to break from the mold and create something strong and revolutionary.

From "Bury Our Friends"

"Like some doll you thought you could throw away/ I found my legs."

A lot of the songs off No Cities for Love seem to deal with this theme of reclaiming power, and "Bury Our Friends" best exemplifies those themes. Although the band had seemingly exhausted themselves by 2006, splitting into the side projects of the Corin Tucker Band and Wildflag, respectively, they've finally reunited to fight another day. And it's a good thing, too. We live in incredibly turbulent times socially, politically and otherwise.

As much as we like to capitalize on '90s nostalgia, it's a whole new battleground we're fighting on, and there HAS been casualties within the past few years. The lines "exhume our idols/ and bury our friends" seems to imply that. But likewise, the promise of "we're wild and weary/ but we won't give in" rings much louder.

Sleater-Kinney provides us with strength anew, and there's no doubt that No Cities to Love will mark that the riot is far from over.

More like this
Lizzo Twerks While Playing James Madison's 200-Year-Old Crystal Flute Onstage
By Radhika Menon
Everything To Know About Taylor Swift’s 10th Studio Album, 'Midnights'
By Grace Wehniainen and Jake Viswanath
Looks Like She Made It
By Lindsay Zoladz, Beau Grealy and Tiffany Reid
Craig David Is Still Slicker Than Your Average
By Olivia-Anne Cleary
Get Even More From Bustle — Sign Up For The Newsletter