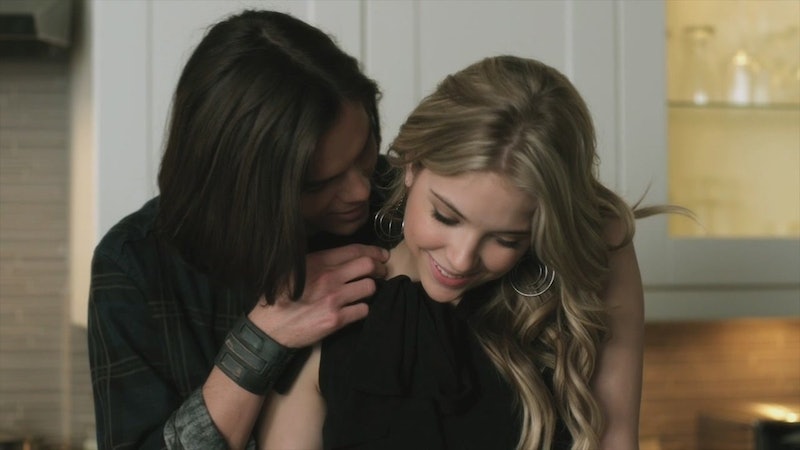 Get excited, Haleb fans! Show creator I. Marlene King dropped a possible spoiler about what we can expect for the future of Hanna and Caleb's relationship. According to her Twitter, King thinks Haleb deserves a hot sex scene in Pretty Little Liars, and I couldn't agree more.

It would make sense for Hanna and Caleb to get a little steamy. After all, they're back together and better than ever since Caleb's returned from Ravenswood and they've finally kicked their alcohol habit. But a hot sex scene also lines up with another potential spoiler: that Hanna has a pregnancy scare. Tyler Blackburn, who plays Caleb, was asked to play two truths and a lie with Yahoo! and Blackburn spilled the following:

Now, two of these things are true and one is a lie, and that's for us to find out. But if the one about Hanna being pregnant is real, there's no wonder King wants to show the sex scene that could spur on that scare. But whatever the reason for a steamy scene between my favorite PLL couple, I don't really care. All I care about is Haleb getting down because they're the best. Fingers crossed King's tweet is a sign of things to come.

But for now, tide yourself over with the 10 best Haleb moments. Sigh, I just love them so much.

Remember when Hanna was first hiding Caleb in her house and had to climb into the shower with him so they wouldn't get caught by her mom? Let's be real. It's basically the moment the two of them fell in love.

Getting to Know Each Other

Hanna opened up about her childhood spent at Fat Camp and Caleb told her about how his parents left him. For a moment they let their guards down, and let each other in.

How can you not love the beautiful, romantic way that Hanna lost her virginity? It's every high schooler's first time dream scenario.

Telling Each Other "I Love You"

OK, so they may have started liking each other in the steamy shower, but once they got around to saying it out loud it was beyond adorable. Even when they were doing it as they were bidding each other farewell. Stupid Ravenswood.

Speaking of Ravenswood, the part where Hanna says goodbye to Caleb is totally heartbreaking but also a really great Haleb scene. She kisses Caleb and when he asks what that was for she replies, "For being the kind of guy I can ask to stay and help a girl that pretty." So much trust in this relationship, it's beautiful.

When They Decide to Re-Commit to Each Other

Too many episodes and a haircut later, Hanna and Caleb decide to give their relationship another go. They're both broken and damaged but they find each other and somehow you know it's all going to be alright as long as they're together.

I love when Hanna learns that Caleb keeps his computer locked with a crazy password that ends in the four digits from the date they first slept together. That's pretty cute.

Suprising Her at the Ball

Pretty Little Liars could just be Hanna and Caleb dancing forever and I'd still watch.

Caleb is the boyfriend every girl wants. Bad boy on the outside, but a totally softie at heart.

If the upcoming promised sex scene is half as hot as this dressing room kissing sesh, we're all in trouble—and I can't wait.

More like this
Do I Have To Tell My Crush That I Slept With Her Ex?
By Sophia Benoit
This Company Will Send STI Tests Right To Your Door
By Lexi Inks
The Strange, Sad, & Hilarious History Of Online Dating
By Samantha Cole
Matt Smith Proves He's Daddy Daemon In This Viral 'House Of The Dragon' Video
By Marina Watts
Get Even More From Bustle — Sign Up For The Newsletter