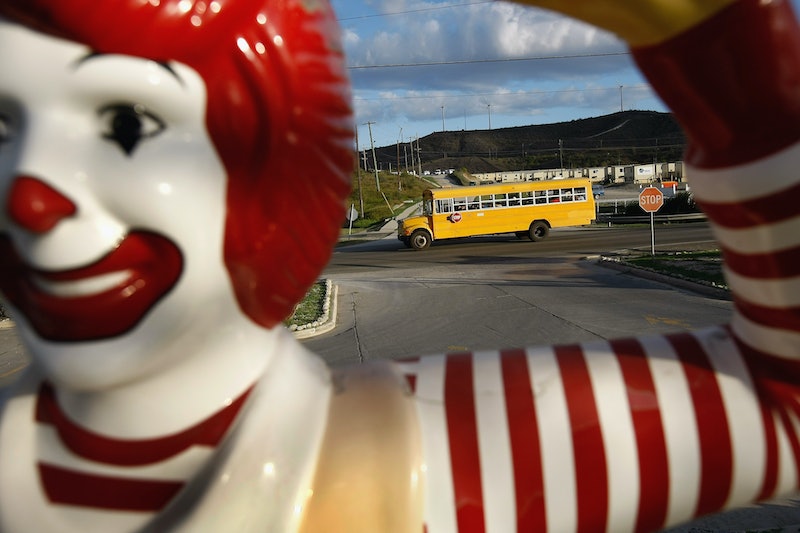 It's been a few months coming, but it looks like McDonald's has finally flipped. After the chain's incredibly uncomfortable campaign that sought to debunk myths surrounding their food (namely, is that real meat?), the chain has released another unsettling commercial. But this one is 10,000 times creepier. McDonald's latest commercial is nothing but McDonald's signs. Footage of signs from different locations play one after another, without explanation or context, for a full minute straight. What does it all mean? If there's one thing for certain, it's that McDonald's is in dire need of an intervention.

The commercial begins with a shot of a McDonald's sign, that ubiquitous landmark of practically every city and suburb in America. You know the one — the Golden Arches, sometimes accompanied with the slogan "Over 99 Billion Served," mounted over a message displayed by either an LED sign or a changeable letter board. The first still is of a sign that reads, "Thank you veterans." Aw, how nice, you think. McDonald's must be running a promotion related to veterans. But then the signs keep coming, one after another, and they just don't stop coming.

Even though they're all words of hope and support, after the fourth or fifth one, the sign messages start feeling inexplicably... sinister. Examples include "God gave us a miracle," "Hug those dads," and one that just says "Open" under a completely dilapidated set of golden arches.

As if that weren't creepy enough, the unexplained sign slideshow is set to a haunting cover of Fun's "Carry On," sung by a choir of children. It's enough to send chills down your spine. Maybe it's just me, but the cryptic commercial is reminiscent of a ritual relic left behind by a serial killer after a fresh kill.

All jokes aside, the seemingly random McDonald's commercial does carry meaning behind it. Joel Yashinsky, U.S. VP of Marketing, said in a statement that the signs are meant to "continue to tell the story of McDonald's that it plays a role in the communities we serve." They're meant to emphasize the chain's place in the social fabric, particularly after national tragedies.

One of the signs in the commercial reads, "We remember 9/11" while another displays the words "Boston strong." Some of the signs wish local residents happy birthday or congratulate them on new bundles of joy. The last sign in the commercial sums up the intention of the campaign: to highlight the "lovin'" in its "I'm Lovin' It" tagline. It reads, "A little lovin' can change a lot."

According to branding expert Laura Reis, the campaign is effective because the signs are so recognizable. She told the Associated Press:

It's something that everyone has seen on the roads growing up.

However, not everyone is a fan of the campaign. More cynical viewers slammed the chain for capitalizing on tragic events to sell fast food or improve its image. Yeah, corporate exploitation of tragedy is definitely not cool, but it's infinitely worse when it's delivered in a package that might as well be a haiku left by a serial killer on a dead body.

Watch the commercial below (and prepare for it to haunt your dreams).