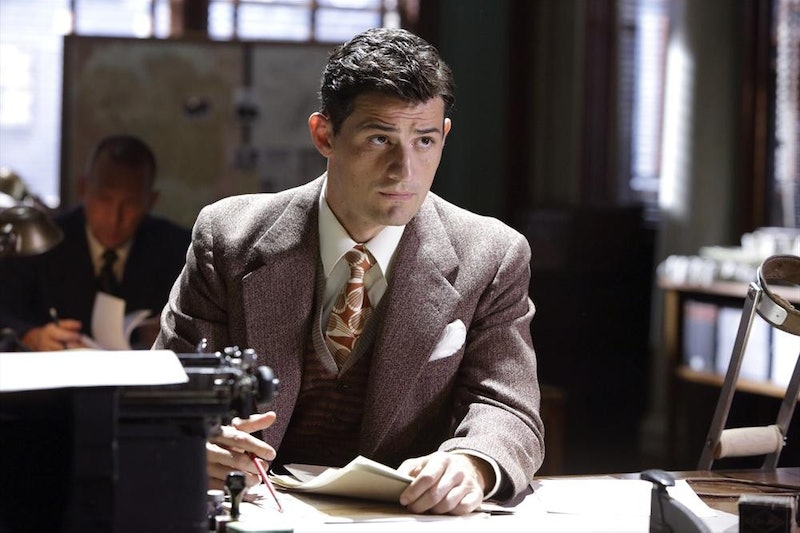 In a perfect world, Agent Peggy Carter would obviously end up with Captain America, happily ever after. But, as we all know, he gets frozen and un-frozen in the future, and while we can see that they've reconnected in Captain America: The Winter Soldier, it's clear their moment has passed. We also know that Peggy eventually married someone else, who she had children with. So, who's second best to Captain America? Will Peggy end up with Agent Daniel Sousa on Agent Carter ?

I mean, I know he's no Howard Stark. But Stark has a reputation of being a womanizer — or, you know, someone who has committed treason — and that can kind of kill the mood.

Sousa has certain advantages over his romantic rivals. For one thing, he's alive and present in the 1940s, so he has that over Captain America. And he (so far) seems to be a good, honest agent, with none of Stark's sleaziness. Most importantly, he recognizes that Agent Carter is good at what she does, and that she's more than qualified to be a field agent. That gives him an advantage over, oh, every other man on the show.

But is that enough of a seed for romance, or will they just be very close co-workers?

If you re-watch Captain America: The Winter Soldier, Peggy Carter lets slip one big piece of intel about her personal life. No, it's not in the scene when Steve Rogers goes and visits her at her bedside. Instead, it's when Rogers goes to visit an exhibit devoted to Captain America at the Smithsonian.

There, a video plays with an interview of Agent Carter from the '50s. She's talking about all of the heroic exploits of Captain America, and how he often saved American soldiers during his raids on Hydra strongholds. She then says in an aside that one of the people Captain America saved went on to become her husband.

Now, we just have to listen and see if any of the other characters on Agent Carter talk about being saved by Captain America. Agent Sousa could very well be that person. As we know already, he's got some kind of leg injury from the war. Could it have been a lot worse, had Captain America not intervened? We'll have to keep our eyes open like the good little agents we are.