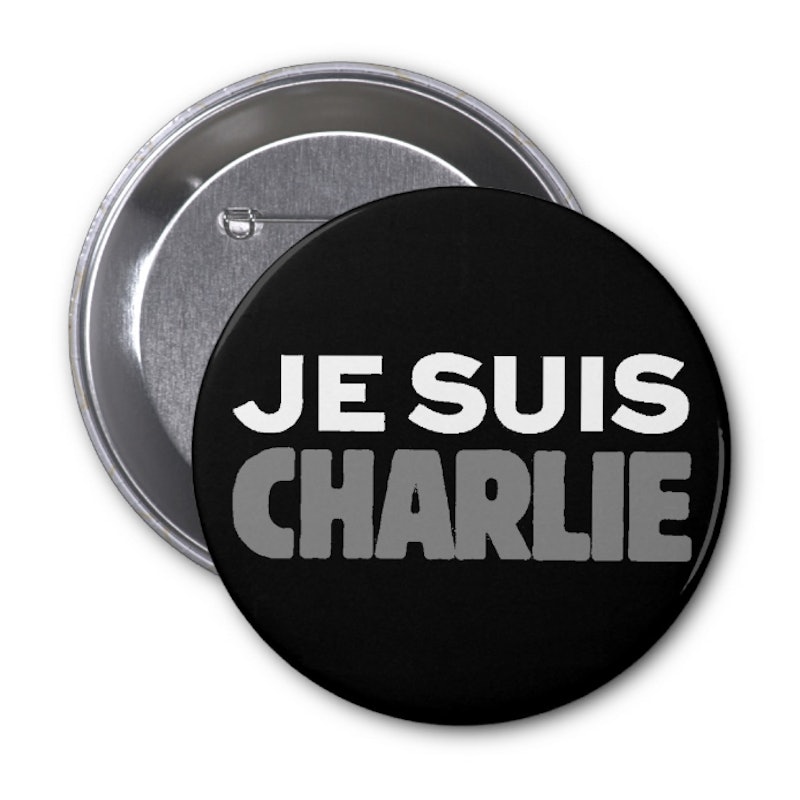 After a terrorist attack on Charlie Hebdo killed 12 people in France, many have taken to showing explicit support for the victims and for the newspaper. The phrase "Je Suis Charlie," which translates to "I am Charlie," quickly began not only trending on Twitter but also became a physical presence. At the Golden Globes, George Clooney and Amal Alamuddin wore "Je Suis Charlie" buttons on the red carpet, as did a number of celebrities. Kevin Séraphin, a French basketball player on the Washington Wizards team, wore a "Je Suis Charlie" t-shirt during warmups before a game against the Chicago Bulls.

The phrase has become a powerful message for those who want to honor the victims by standing with Charlie Hebdo. And though there has been some criticism accusing retailers of trying to profit from a tragedy by selling apparel with the logo, Etsy retailer Danica Harcourt told CNN Money that was never the intent.

Our goal was never to profit from the sale of these t-shirts but to help raise awareness to help support the French population.

There are tons of websites selling "Je Suis Charlie" apparel, and it's a powerful message. If you want to show your support for Charlie Hebdo and its mission, here are a few options.

Buttons just like the ones Clooney and Alamuddin wore to the Golden Globes are available on Zazzle for $4.

If you're looking for a different way to display your support, Etsy has "Je Suis Charlie" jewelry for sale, including this leather bracelet for $8.

More like this
Where To Get A TikTok-Approved Welded Bracelet In The UK
By Rebecca Fearn and Orla Pentelow
Of The Best-Selling Fashion On Amazon, These 50 Finds Are The Most Stylish & Affordable
By Maria Cassano
Dua Lipa Just Took A “Pre-Show Dip” In A Dreamy Thong Bikini
By Allie Fasanella
13 Colorful Sneakers For Your “Hot Girl Walk” This Summer
By Casey Clark and Jamie Cuccinelli
Get Even More From Bustle — Sign Up For The Newsletter