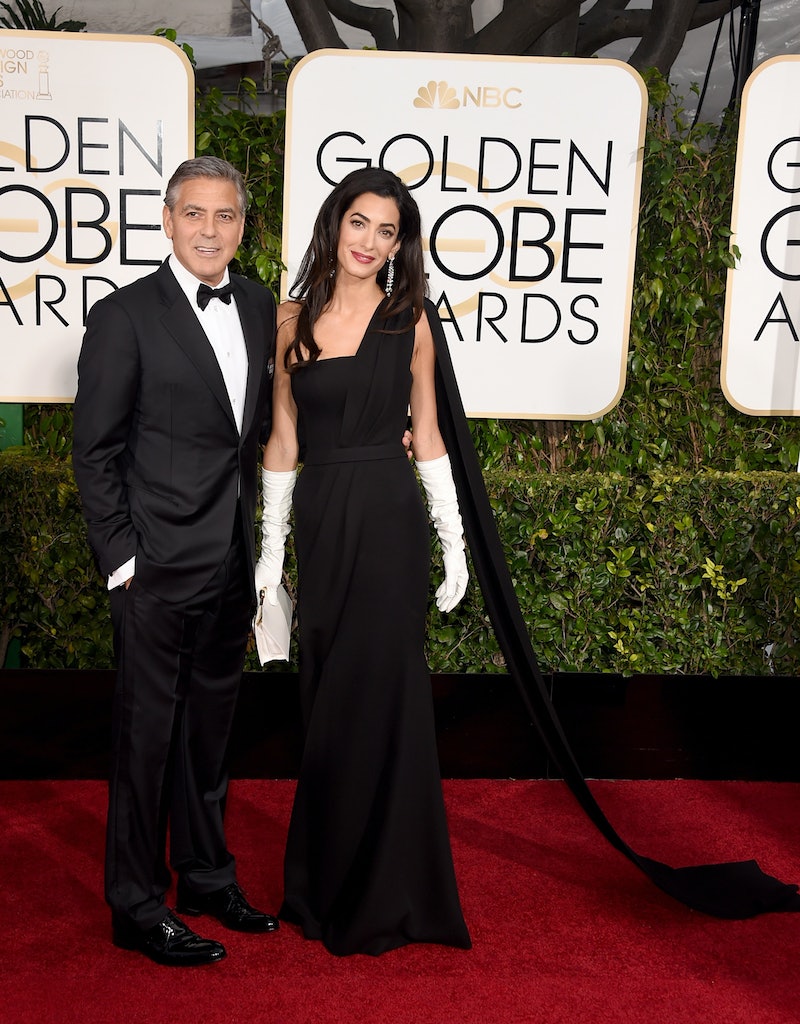 I think many of us watching the 2015 Golden Globes red carpet were planning to shut our brains off and just enjoy the parade of beautiful people in beautiful clothes, but it's important to remember that there's more happening in the world right now than the awards show. It seems that some of the attendees of Sunday night's Golden Globes feel the same way, as George Clooney and Amal Alamuddin wore "Je Suis Charlie" buttons on the red carpet, with Amal's pinned to her clutch. Diane Kruger and Joshua Jackson also held a Je Suis Charlie sign at the event. Je Suis Charlie is a French phrase that translates to "we are all Charlie," and is used to show solidarity with Charlie Hebdo , the satirical magazine that was attacked by masked gunmen, who killed 12 people.

In addition to the celebrity couples, some unidentified people, apparently somewhere behind where E! host Ryan Seacrest is conducting interviews, showed Je Suis Charlie signs, that can be seen from certain angles if you zoom in very closely. Kathy Bates also displayed a phone case emblazoned with Je Suis Charlie, and Helen Mirren carried a sign too. While it's not easy to find any of these signs on TV, using the Golden Globes to show support for Charlie Hebdo was a smart, inspiring decision for all of those who took advantage of the public platform.

Yes, it's awards season and we all can't wait to see who's wearing what and who will bring home the night's biggest prizes, but what happened at the Charlie Hebdo offices matter today and everyday, because it directly relates to free speech. This isn't the first time Hollywood has shown support, and by simply wearing buttons and holding signs, the Clooneys, Jackson, Kruger, and everyone else proclaiming Je Suis Charlie are making sure that no one forgets what happened.

Here's how everyone showed their support:

More like this
Taylor Swift, Kerry Washington & More Speak Out On Uvalde Mass Shooting
By Jake Viswanath
Rebekah Vardy & Coleen Rooney’s Trial Has Officially Begun
By Bustle UK
The Best 2000s Outfits from High School Musical
By Avery Matera and Dominique Norman
Kate Had A Solution When Tom Cruise Broke This Royal Rule At The 'Top Gun' Premiere
By Frances Stewart
Get Even More From Bustle — Sign Up For The Newsletter