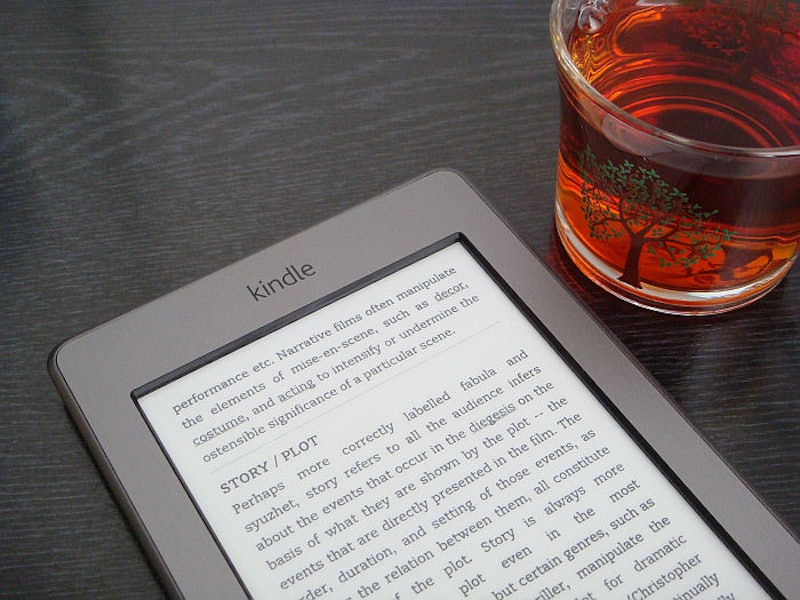 Ever since e-books arrived on the scene, forecasters have said year after year that it's only a matter of time before they ultimately edge print books out altogether. Now, however, some seem to think the opposite may be true: that the e-books market might be slowing down — or even drying up! — and print books may "win the war" after all.

So what's all the fuss about? Sales of print books are up and sales of Kindles are down (at least in the U.K.), leading many across the pond to speculate that ebooks are going out of fashion, and that print books may carry the day after all.

Of course, print books never actually stopped leading the charge, considering that e-book sales have never made up more than a third of all book sales. And although they rose to that number extremely quickly — Amazon, for reference, only introduced the Kindle in 2007 — the majority of all books sold has always been print.

The big picture here, of course, doesn't support the idea that e-books are "losing ground." Sales of Kindles may have plummeted in British stores, but that doesn't mean they aren't still selling on Amazon, and it certainly doesn't mean that e-books aren't selling. If anything, it could just mean that Kindles have been around for the better part of a decade and most people who want one already have one.

The underlying issue in all of this, however, is the idea that ebooks and print books are in some sort of fierce battle to the death with one another in which the only outcome is total dominance. So often people seem to assume either that e-books will soon drive their dinosaur-like cousin to extinction, or that print books will outlast e-books and prove them to be nothing but a flashy, inferior imitation. In reality of course, neither of these outcomes is likely, and both misrepresent what actually appears to be happening in the books market today.

Now that sales of e-books seem to have leveled off, the reality we seem to be facing right now is that both e-books and print books are popular. Both products have relative benefits and drawbacks; both have people who enjoy them. Some people even enjoy both. Will their realative share of the market shift over time? Almost certainly. Will one eventually "triumph" over the other? Maybe, but probably not for a long, long time.

The reality is that there is absolutely no reason print and e-books can't coexist in the books market. I realize that can be hard to wrap your head around given the way the two have been portrayed as inherent adversaries in the media for so long, but it actually is possible. And more importantly, coexistence really does seem to be what's happening, at least for right now.

More like this
The 20 Best Audiobooks To Fall Asleep To
By Aoife Hanna and K.W. Colyard
'Bridgerton' Star Nicola Coughlan Confirms Season 3 Will Focus On Colin & Penelope
By Grace Wehniainen and Alyssa Lapid
Candice Carty-Williams’ 'People Person' Tackles Daddy Issues With Warmth
By Sam Rogers
100 Clever Gifts Under $25 When You Have No Idea What To Get
By Maria Cassano
Get Even More From Bustle — Sign Up For The Newsletter