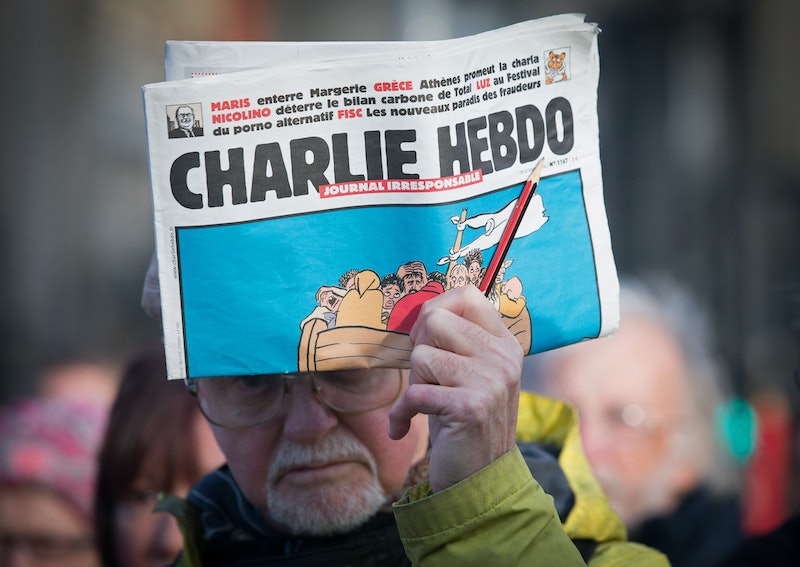 On Wednesday, 3 million copies of Charlie Hebdo will be released in 16 different languages, in an explicit, defiant response to terrorists: You cannot shut us down. To this end, this week's Charlie Hebdo cover features an image of the Prophet Muhammad — many Muslims oppose any depictions of the prophet, and it was the newspaper's satirical cartoons of the figure that allegedly prompted last week's attack — holding a sign that reads "Je Suis Charlie," alongside the caption "All is forgiven."

The cover is representative of the ethos of Charlie Hebdo, both before and after the attack (a handful of media outlets have funneled money into the company to ensure it continues to exist). Slain editor Stéphane Charbonnier famously told Le Monde, "I’d rather die standing up than live on my knees" in regard to the paper's editorial decision to publish cartoons that some viewed as witty satire and others found offensive.

Charlie Hebdo typically prints about 60,000 copies per week, but announced it would up the number to 1 million just days after the attack that left 12 dead during an editorial meeting. In response to overwhelming demand from a number of nations, Charlie Hebdo will now print 3 million. Here's how to get your copy.