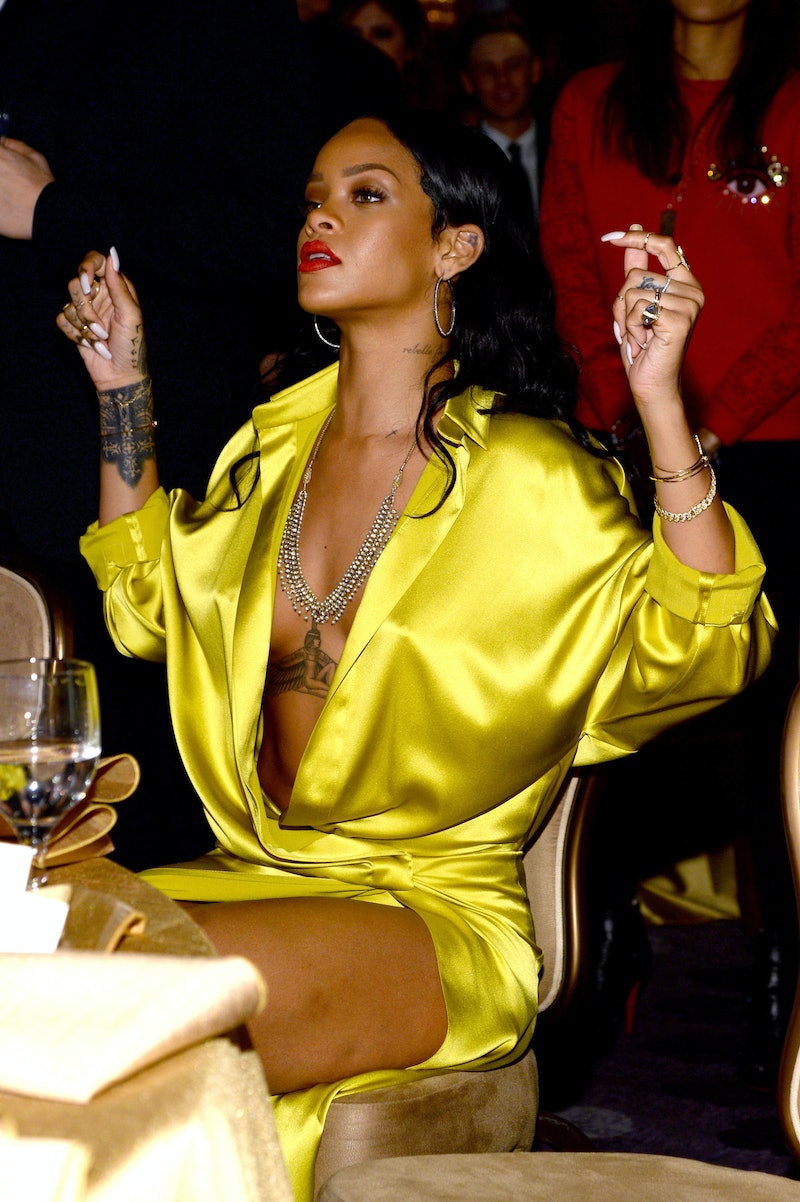 Hot on the heels of reportedly ringing in the New Year at the same club in St. Barts, there's a DIVINE new rumor about yacht king Leonardo DiCaprio and Instagram queen Rihanna: The two may or may not have canoodled with one another at a Playboy Mansion bash last weekend. HUBBA HUBBA. If 2015 is the Year of RiDi, I am HERE FOR IT. According to TMZ’s "spies", DiCaprio and Rihanna were allegedly spotted “gettin’ super steamy and even swapping spit” (normally, I'd be disgusted by that turn of phrase, but I'll make an exception. Because Rihanna and Leo DiCaprio) at the Playboy Mansion. A friend of DiCaprio's says the smoochin’ “didn’t happen,” BUT two unnamed sources who attended the party at Hugh Hefner's house told TMZ that the smoochin’ totally happened. If someone could get Hef on the line, that'd be awesome. Would love to hear his take.

No, it is not confirmed, but OH MY GOD. I am ROOTING for this to be true. I am shipping Rihanna and Leo Dicaprio so hard. If it really does happen/is happening, there’s a solid chance I’ll actually die from Too Good To Be True Overload. But you know what? The risk would be worth it.

Not only am I pulling for that story about RiRi and Leo "swapping spit" at the Playbs Mansh to be real, but I REALLY want them to date. They'd be The Couple to End All Couples. Here are a few reasons why I'm so revved up at the thought of RiRi and DiDi dating:

I love it when mega hot people pair up. Sue me. (And yes, Leo's still hot. Don't even start with me.)

They're hard-workin', mega-talented, crazy-famous people. But they also give off extreme levels of DGAF. I have this beautiful vision of the two of them at dinner: Leo is in a bucket hat and loafers. RiRi is in a t-shirt dress and combat boots. They laugh and drink and repeatedly ask the waiter whose shoes he likes better. The waiter switches up his answer every time. The waiter knows how to play along.

The photos alone would make my eyeballs explode.

And if the Rihanna and DiCaprio mack attack story is nothin' but a pile of bunk? Well, I guess I'll have some fanfic to write. Silver lining, my friend.