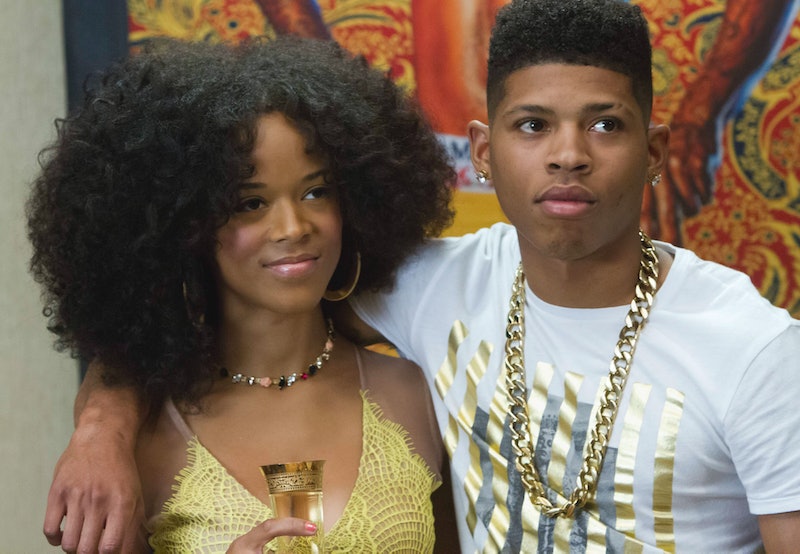 I feel like now that FOX's Empire is a huge hit, everyone will be choosing which Lyon brother they like the most, want to see take over Empire Entertainment, and think is the dreamiest. Personally, I related the most to Jamal, who could totally see how crazy both his parents were being (and had an enviable loft apartment). But I could see how people were immediately drawn to Hakeem, because as played by rapper Bryshere Gray, the life of a hip hop mogul actually seemed fun. And if you're curious about the real life musician behind Hakeem Lyon, you can find music from Gray, aka Yazz the Greatest, online. He hasn't released a full album yet, but the title track from his in-progress record, "Respect," is available on Rhapsody.

Like many rappers, he uses an alias for his music. Just like Curtis Jackson became 50 Cent or Sean Combs became Puffy, Puff Daddy, P Diddy, and Diddy, Gray produces his music as Yazz the Greatest, or YTG. But he's also unique among rappers, because his actual name is already as well known as his on-stage pseudonym. While he's been working steadily to promote his music, the show has ensured that he's being exposed to an audience of millions.

Gray is one of the few rappers to dance onstage to his own music — and he's pretty great at it! Let's hope that this means everyone can collectively agree there is absolutely no use for Chris Brown anymore and he can finally fade away into nothingness.

Watch One of His Official Music Videos

Back in 2011, when he was still a braces-clad teenager who had just graduated from high school, Gray produced a couple of music videos for his singles, "Homework" and "On My," which cover a couple of days in the life of a young guy like him. Whether it's finishing up homework and having to bike to school last minute after a car breakdown or slaying a pickup basketball game to impress some ladies, Gray has distilled teenhood into its most gangsta elements.

Listen To His Contributions To the Empire Soundtrack

And thanks to Empire, he's releasing original music from the show every week produced by Timbaland, who's responsible for some of rap's (and pop's) biggest hits. And that authenticity comes through in the songs. Sure, it's not as irreverent as Gray's music or as profane as real gangsta rap, but it doesn't sound like they skimped one bit on the production values. If these songs were on the radio, the only reason you'd realize that these aren't actual hits is because there isn't a verse from Drake.

If you missed any of Empire Season 1, watch Bustle's drunk recap here:

More like this
Gabourey Sidibe Wore A Traditional West African Wedding Dress On The Cover Of Brides
By Dominique Norman
Selena Gomez Joked About Her Relationship Status In Her ‘SNL’ Monologue
By Grace Wehniainen
After 'Heartstopper' Used This Indie Artist’s Song, Streams For It Soared 8,000%
By Alyssa Lapid
Stormi Just Walked A Red Carpet With Mommy Kylie Jenner & Daddy Travis Scott
By Hugh McIntyre
Get Even More From Bustle — Sign Up For The Newsletter