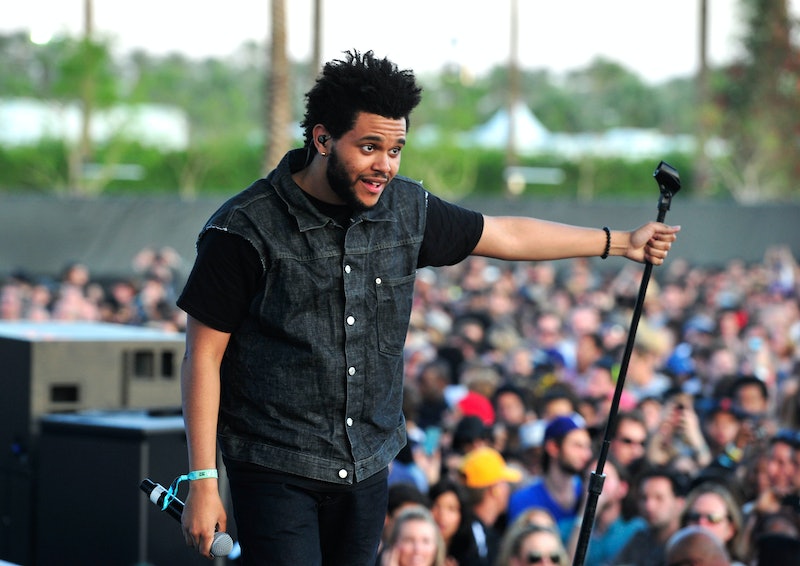 Whether you've been a fan of the Weeknd for a long time, heard of him for the first time when he collaborated with Ariana Grande on "Love Me Harder," or simply have his track "Earned It" from Fifty Shades of Grey on repeat, this is tragic-slash-terrifying news for all fans. The performer, whose real name is Abel Tesfaye, appears to have landed himself in some legal trouble, though the seriousness of it still remains to be seen. According to TMZ, the Weeknd was arrested for punching a cop, and excuse me for cringing away from that entire headline. On the long list of petty crimes he could have committed, that one sounds like one of the worst.

Details on the incident are scarce, but it allegedly happened over the weekend (no pun intended) while the performer was in Las Vegas. During an altercation at the Cromwell Hotel at around 4 a.m. — whether it was a physical or a verbal altercation remains to be seen — the police arrived on the scene in order to break up the fight. However, the police's involvement somehow result in the Weeknd hitting one officer upside the head with a closed fist and being arrested for misdemeanor battery of a protected person. Of course, you'd never think such a thing had happened from the singer's Instagram, to which he posted a picture on Saturday of himself leaving Vegas.

So, clearly, if the Weeknd was really arrested in Vegas then the charge didn't stick. (Or, you know, he's out on bail, as TMZ reports.) This Instagram photo was apparently posted after his release, and the Weeknd has since been fairly active on the social media site by posting many pictures to let his fans know that he is just fine. From that, I'm willing to assume that the arrest and release on bail aren't meant to be causes of concern for fans; after all, the Weeknd is at least giving the appearance of being highly unconcerned, and if he has already moved on, then we can move on.

MTV adds a little extra detail to the story, reporting that, "A police officer pulled Tesfaye into an elevator [to break up the fight]," and that it was on the way into the elevator that the punching occurred. That new revelation makes it sound like the punch was more of an accident than an intentional move on the Weeknd's part, but the singer has released no official statement on the altercation to clarify anything yet. Ultimately, while it's scary and disappointing to hear that the "Love Me Harder" singer got into a fight in Vegas — and, worse, was arrested for assaulting a police officer — until we know more about what happened, it's hard to judge how disappointed one should be.