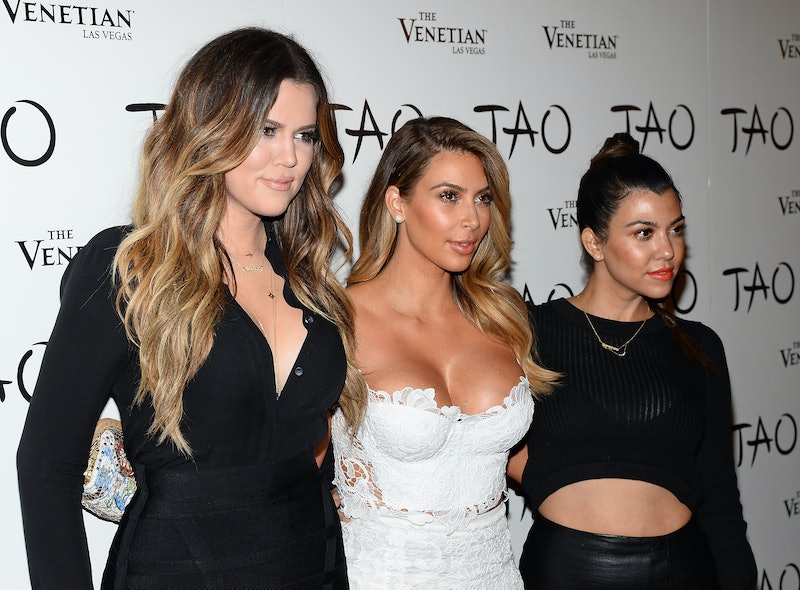 I'm going to go ahead and be honest about one thing. I don't keep up with the Kardashians. I'm sure their show is great and all, but my experience with the Kadashian family is pretty limited to stalking their Twitters and Instagrams and fangirling the entire existence of the flaw-free North West. (And laughing at Kim Kardashian for cropping North West out of her selfie, of course, but that's just a given.) However, when I heard this latest rumor, a part of me was kind of, well, touched. According to E! Online, Kim, Kourtney, and Khloé Kardashian are allegedly going to Armenia for the first time in April. And the reason they want to go is understandable and sweet.

"Visiting Armenia has been on Kim's bucket list forever," says an E! Online source. "They are all so excited! They want to learn about their heritage." The Kardashians are one of the numerous names to put the country of Armenia on your average American's map, but this would reportedly be the first time the three sisters traveled to their paternal homeland. Even better, they're not the only ones who are going: Kim plans to take North West (and Kanye, if his touring schedule allows), while Kourtney will be traveling with Mason, Penelope, and Reign Disick.

While the sisters have always identified with their cultural heritage, there's a difference between identifying as an Armenian-American and knowing anything about the culture. I think many of us would hazard a guess that the Kardashians are really more American than they are Armenian at this point; while they have paid their respects to the tragedies faced by the country over the years and taken pride in their Armenian heritage, that's different from actually going there, interacting with their people, learning their history, and properly embracing that half of their ethnicity.

Of course, I'm not saying that the Kardashians shouldn't be considered Armenian if they don't research their heritage. The fact that I can't name a single Jamaican Prime Minister doesn't change the fact that I was born in Jamaica to two Jamaican parents who worked their butts off to bring me to America. However, I find it admirable that the Kardashians do make such a point of doing research into the culture, and that they are not only allegedly planning this visit to Armenia but are also planning to bring their children with them. To me, that shows a self-awareness of how far removed they are from their own background and a desire to make sure that their children don't experience the same disconnect.

Of course, this is the Kardashian Klan we're talking about, so I would be utterly surprised if they didn't bring a thousand cameras with them to either record the trip for their show or for their Instagrams. However, they may yet surprise me. After all, I was expecting Kim and Kanye's wedding to hit the show or the Internet and the pair remained surprisingly private about the ceremony aside from the prerequisite magazine shoots of the dress and the lead-up to the ceremony. We saw the key moments, sure, but, considering the family has built its empire off letting the world into every minute aspect of their lives, that was really tame.

Thus, it's possible we won't be seeing much of their Armenian trip either; this could be a private and respectful sort of thing the three sisters are doing for their own personal health and education rather than something they're eager to share with their legions of followers. But, even if we do get as many pictures from Armenia as we got from Thailand, that doesn't take away from the importance of what the family is doing. Pretty much every immigrant, or child of immigrants, can speak to how easy it is to lose touch with your culture once you find your footing in American society. Pretty much every immigrant, or child of immigrants, can speak to the odd mixture of pride and shame one can have with regards to one's ethnic background. While you're proud of where you come from, or where your family has come from, there's a simultaneous pressure to assimilate, to, say, become more American than you are Armenian, to celebrate your culture at home but downplay it among American friends.

So, as one of the most visible representations of the Armenian culture in American society, it's so great and so meaningful to see the Kardashians gearing up to take a trip to their home country and learn more about their heritage, to show that you can be rich and successful and assimilate and embrace your culture. And, of course, it's great and meaningful that they are making a point of taking their children so they can start embracing that same culture at a young age.