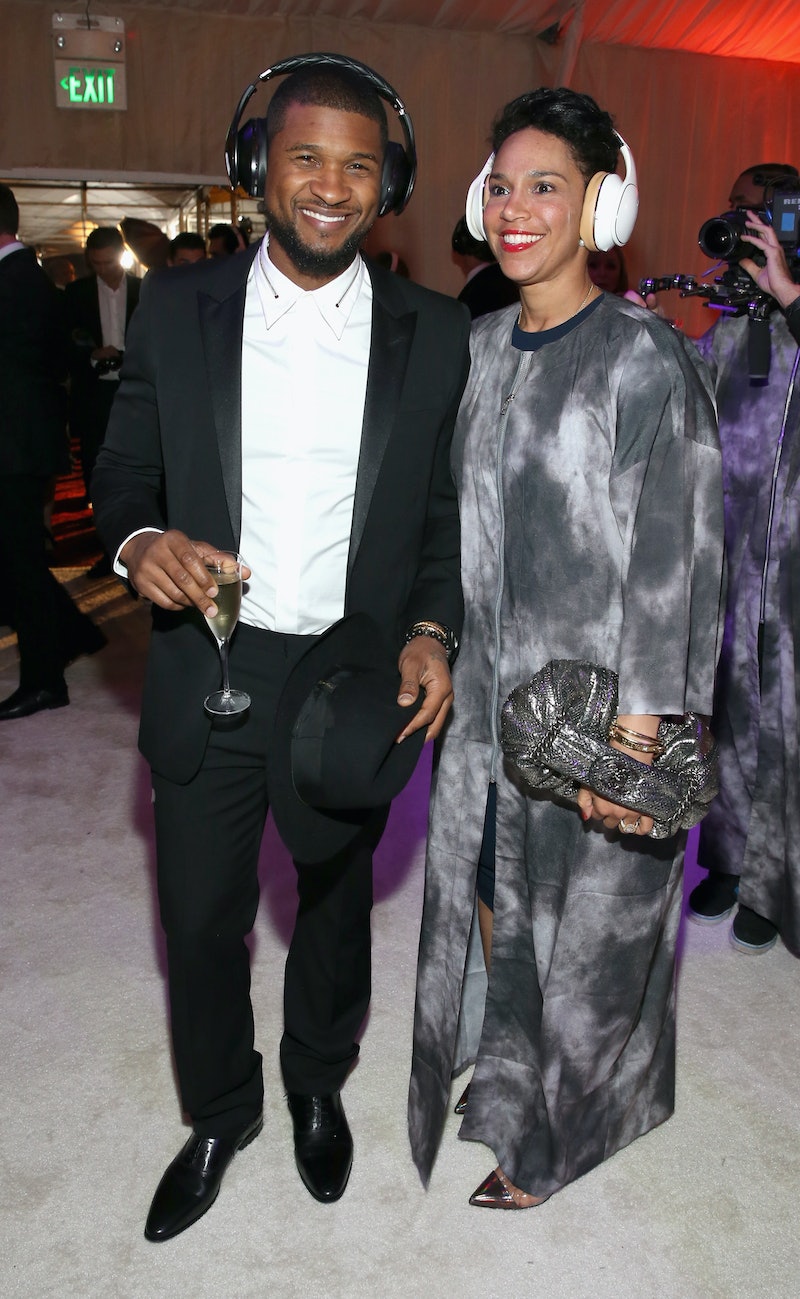 Let us acknowledge a few undeniable facts: Usher has a voice comparable to velvet, Usher makes rollerskating look cool, Usher is a phenomenal dancer, Usher oozes charisma, and, unfortunately for us, Usher is taken. And not just sorta taken, like, oh maybe there's a chance we'll see each other in a grocery store and accidentally bump carts and he'll realize we were always meant to be together. He's put-a-ring-on-it taken, so even a chance grocery store encounter won't change that. I'd wonder who the "lucky" girl was if I didn't just do some reading up on Usher's new fiancée, Grace Miguel, and realize that it may be Usher who is the "lucky" one. She's pretty much the Amal Alamuddin to Usher's George Clooney, but let us discuss exactly why that is.

According to her bio on Usher's New Look site, his charity of which Miguel is a board member,

Grace began her career as a chef working the circuit of the top NYC catering companies, then went on to own her own catering company that serviced the entertainment industry, ending her gastronomic career as the executive chef on the set of the Cosby show. "When the show ended in 1992, I knew it was time for a complete change. I had a passion for bringing people together and was socially immersed in the creative scene. I knew a lot of great photographers, musicians and artists so it only made sense for me to transition to music."

Which brings us to her career in music, and it's nothing short of "Oh, WOW."

Let's just list the record companies she's worked for as she's climbed the ladder to the top — the top being Executive Vice President of Marketing/Creative Services at Island Def Jam Records. According to Usher's New Look website she's also worked for MCA Records, Jive Records, AND Geffen Records. Say it with me, "Damn."

She's also Usher's business partner and manager, for obvious reasons. Her bio explains that she has meshed the different facets of Usher — philanthropic, creative, and entertaining, and bundled that up into what is now known as Coup D’Etat. It's listed as, "The management, branding and marketing force behind musical powerhouse, Usher Raymond IV."

She's broadened Usher's horizons, according to Usher himself

One thing that has come from having a great partner like Grace is being able to cherish the places that I've gone. We see the monumental sites, go to the museums, eat in the best restaurants. I'm that guy now! In the past I'd do what I have to do and get on the bus to the next city. Life has become a vacation.

Her bio goes on to list her extensive charitable works which include producing "America is Slowly Dying," to raise awareness of HIV/AIDS in the African-American community. She's also a board member of Usher's New Look Foundation, and she "launched her own philanthropic initiative" called En Meme Temps which focuses on helping children grow through the culture of art.