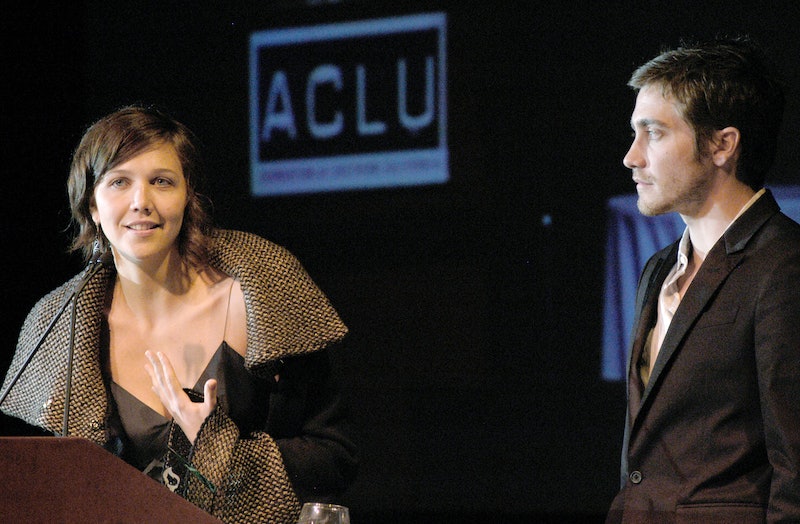 So. This is where we're at. There is apparently a whole genre of fan fiction, existing mostly on LiveJournal (because duh, I guess) that's called "Gyllencest", and is based on the horrible notion that there's something romantic going on between brother/sister acting duo Jake and Maggie Gyllenhaal. The whole thing has started spiraling out of control since the siblings were each other's date to The Golden Globes this week, and because they acted affectionate on the red carpet and Jake seemed to tear up watching Maggie accept her award. Because you know, no brother and sister have ever hung out, hugged one another, or become moved with pride at each other's success. The logical conclusion here is that we must immediately talk about the possibility that they could be fucking. Cool job with the logic, Internet.

A lot of the stories make Jake out to be the initiator, very voyeristic of his sister and a little bit rapey. Here's an excerpt from a story titled "theirloveisso...vaguelydutch?"

"The first time you saw Maggie naked was onscreen, covered in prosthetic scars. She was next to you in the theater, and when the time came she squeezed your hand and said, "Okay, Jakie, time to look away."

You tried to. You couldn't. It was too strange, too fascinating to see your own face onscreen. To see Maggie's face, so like yours, and her small round breasts and her flat stomach and her long legs. To see your sister nude and beautiful onscreen, larger than life, and to have her warm fingers wrapped around yours.

Later that night, you got drunk at the afterparty. You got drunk because every time you looked at Maggie, you saw the way she looked on film--bent over a desk, biting her lip in ecstacy, breasts submerged in bathwater. Flash flash flash of ways you should never see your sister. You know that she is not the character she plays, but you also know that it was still her naked that you saw. Her, not just the character she played.

When you got back to the hotel, Mom and Dad said goodnight and went to their room. You did't see it, but you know they gave Maggie a meaningful glance. They told, silently, her to take care of you, and she did. She got you back to your room and took your clothes off and bathed your face with a cold washcloth. She was your big sister, and she smiled down at you with a face that looked just like yours.

You kissed her on the mouth, softly, and said, "Maggie, you're beautiful."

That night, you didn't see her naked. She just looked at you with your face in an expression you didn't recognize, and then she took off her expensive dress and got into bed with you in only her slip, soft and silky against your body. She said, "Go to sleep, Jake," and kissed your cheek, and fell asleep with her head on your shoulder.

When you woke up, you took a bath together, like you had when you were kids. Without the prosthetic scars, Maggie's body is smooth and strange, different than it was onscreen. Different than yours, and you wonder how you could ever have seen her as just your sister.

It's weird. There's not much else to say about it. It's like we've entirely forgotten how to leave anything unsexualized. The siblings' Golden Globes appearance kicked up even more of these "jokes" on social media:

Personally, I am definitely not into even joking about brothers and sisters doing it. Maybe it's because I have brothers and the thought troubles me beyond belief, or maybe it's just because I'm a regular human who doesn't have to reduce everything, including familial relationship, to sex. This isn't Game of Thrones, people.