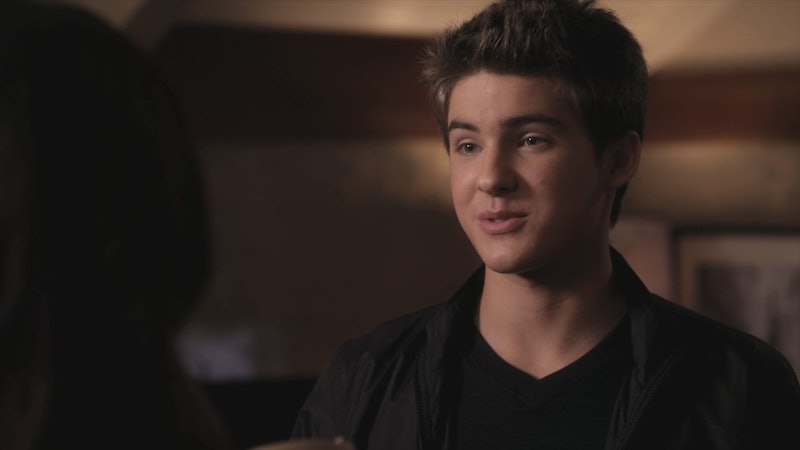 As of the most recent episode, I officially have a new idea for who "A" is on Pretty Little Liars . Although the possibility just struck me last week, after thinking about it, it totally makes sense that Aria's brother Mike is "A." In the winter premiere, Mike texts Aria to come get him from Ezra's house. But when she arrives Mike is nowhere to be found and instead she's greeted by "A." It turns out "A" used Mike's phone to lure her there. Later Aria returns the cellphone to Mike and he seems totally unconcerned that it was even missing, almost like he knew where it was and what it was doing the whole time.

But while that alerted me to the possibility that Mike was shady, thinking about the show as a whole I came up with a lot more reasons for him to be "A." After all, we know it's someone close to the four girls, and it doesn't get much closer than a blood relation. Poor Jason DiLaurantis, he's the sibling always getting the bad rap when in actuality, it's probably Mike who's ruining the girls' lives.

Here are 12 reasons that back up my theory that Mike Montgomery is "A."

What if the two of them initially met because they were both on the A-team together? Or what if she taught him a thing or two? Maybe Mike was only dating her to throw suspicion off himself for when she gets killed. When you have two shady characters hanging out together, and dating no less, it probably indicates something shady is going on.

He broke into multiple people's homes and even injured Aria when he was robbing the DiLaurentis home. Something clearly isn't all right with him and his negative outlook on life (especially in the wake of his parents' split) could drive him to do some pretty crazy things.

And let's not forget that Ella was super worried that when Mike was depressed that he was acting in a way similar to Byron's brother. At the time I thought they were alluding to Byron's brother having committed suicide, but they only ever say, "well you know what happened to him."

No, we actually (and conveniently) don't. Maybe Byron's brother had some dangerous mental illness that Mike could have inherited.

He's Annoyed That Aria Gets All the Attention

The reason Mike could be targeting Aria and her friends is because they've always gotten more attention (especially Aria) than he has. He's a jealous younger brother taking drastic steps to compensate for his feelings. But, many people think Aria is "A" because she tends to get off easier. Well, maybe she does because Mike doesn't want to hurt her as badly as the others. He's not a total psychopath; it's his sister after all.

He Has a Secret Way Out of His Room

Remember when Mike kindly let Aria use his secret escape tree? That was a huge red flag to let viewers know that Mike can get in and out of his house without anyone knowing. It's important that "A" is able to sneak around Rosewood at all hours and now we know that Mike has that capability.

Maybe Mike figured out Byron was having an affair and assumed it was with Ali. (She was extorting him after all.) He could have found that evidence and assumed Ali was blackmailing him to keep their own affair a secret, so he could have tried to kill Ali for revenge and decided to torture anyone who had anything to do with the girl who broke his family apart.

He Always Seems to Know Their Secrets

Sure, he could just overhear Aria on her phone. Or he could know her secrets because he's "A."

He's Really Protective Over His Computer

Mrs. Grunwald says that one of the girls was "touched by the one Alison fears the most." Well, Hanna and Mike did hookup at one point. Also Mrs. Grunwald says Mona's death was a betrayal. Perhaps Mike killed her and the betrayal part came from the fact that Mona thought they really were in love. She did look surprised when she saw her attacker. I don't think she'd look like that if it was Ali, who would be a way more suspected assailant.

Where even is Mike half the time? He only shows up when it's convenient which the writers have addressed at times. At one point Aria learns he's not going to his basketball games and hasn't for awhile. So where has he been? Torturing the girls, obviously. Or as he puts it, "Places. Here and there." Pretty suspicious if you ask me.

This is Why Lucy Hale Can't Know Who "A" Is

Lucy Hale recently revealed on Late Night With Seth Meyers that all the girls know who "A" is, except for her. Many said this meant that she obviously had to be "A." But what if the writers haven't told Hale because "A" is her on-screen brother and they want to keep that from her until the end?

Remember when Aria's iPod suddenly had the classical music Shana played on it? It totally freaked Aria out because she was so guilty over Shana's death. But then Mike was all, "oh yeah I borrowed your iPod for a project, and put that music on. Sorry!" and Aria dropped it. But that's an awfully big coincidence to ignore.

The Texts Start After He Gets Back

After Mike returned from Iceland with his family this whole drama started, and I don't think that's a coincidence.

More like this
Taylor Swift Is "Spiraling" After Releasing "This Love (Taylor's Version)"
By Jake Viswanath
Selena Gomez’s ‘SNL’ Hosting Debut Had Twitter Gushing Over ‘Barney’ & Wigs
By Stephanie Topacio Long
The Time Traveler’s Wife Book Has A Heartbreaking Ending
By K.W. Colyard
‘SNL’ Referenced Jesse Williams’ Broadway Leak In A Chaotic Theater Sketch
By Grace Wehniainen
Get Even More From Bustle — Sign Up For The Newsletter