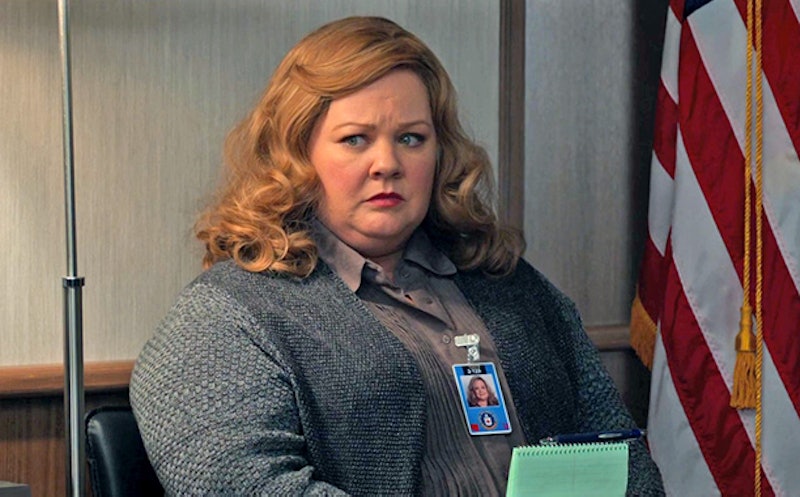 There are so many things to love about the trailer for Spy , Melissa McCarthy's new movie, and the fact that the actress is its star is just the start; there's the wonderful Paul Feig as its director, the dialogue that's a perfect mix of hilarious and risqué, and the scene where McCarthy, in a gray wig and pink suit, kicks a guy's crotch while lying straight on the ground. And then, of course, there's the women — the handful of crazy-talented actresses that Feig assembled to star in his newest movie, from Allison Janney to Rose Byrne to Miranda Hart to, of course, McCarthy.

While it's no surprise that the feminist Feig decided to cast so many great women in his film, the fact that he seemed to have let each of them to play to their strengths is both unexpected and fantastic. As the trailer showed, McCarthy is playing a CIA analyst assigned to the field for the first time. Her character is adorable and unassuming one moment, then sailor mouthed and badass the next; it's the perfect type of role for the actress, who's shown through projects as varied as Gilmore Girls and The Heat to be capable of pretty much anything. And if the movie's as good as its trailer, playing Susan Cooper will finally allow McCarthy, previously relegated to mostly mediocre roles and tired cliches, to spout the most jaw-droppingly funny one-liners since her time in Bridemaids.

Then there's Allison Janney, a prolific actress still best known for playing press secretary C.J. Cregg on The West Wing. In Spy, Janney is a no-nonsense CIA chief with little confidence in Susan's ability to take on such a major assignment and a serious issue with anti-feminist vocabulary. Sure, she might not be doing any walk-and-talks or dancing to "The Jackal," but there's no doubt about it: C.J. Cregg is back, and it's all thanks to Feig.

Rising star Rose Byrne, too, gets to show off the comedic chops she's displayed in movies ranging from Bridesmaids to Neighbors, but that Hollywood still doesn't seem to take seriously; although she's been a familiar face for years, Byrne still hasn't gotten the major recognition that she's so clearly shown she deserves. Yet her role in Spy, as an enemy operative with possible knowledge of a nuclear bomb, could very well be her breakthrough. In the two-minute trailer alone, Byrne gets to be bombshell gorgeous, hilariously uncomfortable, and not shy with the insults; "what a stupid f***ing toast," she tells McCarthy's Susan in one scene, before fake-smiling and adding, "you're delightful."

And then, finally, there's Miranda Hart, a British comedian unfamiliar to many American audiences, but hugely popular in her native country. Hart created the acclaimed sitcom Miranda, which ended early this year; Feig must've been a fan, as according to his Twitter Q&A on Tuesday, he created Hart's Spy role, her Hollywood debut, specifically for her. In the film, she plays Susan's best friend, a woman who inspires the line "give up on your dreams, Susan. She used to write that in my lunchbox." We only get a glimpse of her role, but judging from that, it's bound to be a good one.

So thank you, Paul Feig, for not only casting so many talented women in your movie, but allowing them to do what they do best: be wild, smart, and ferociously funny, able to hurt insults and steal scenes with equal prowess. Let's hope more directors decide to follow his feminist lead.

Watch the Spy trailer below: