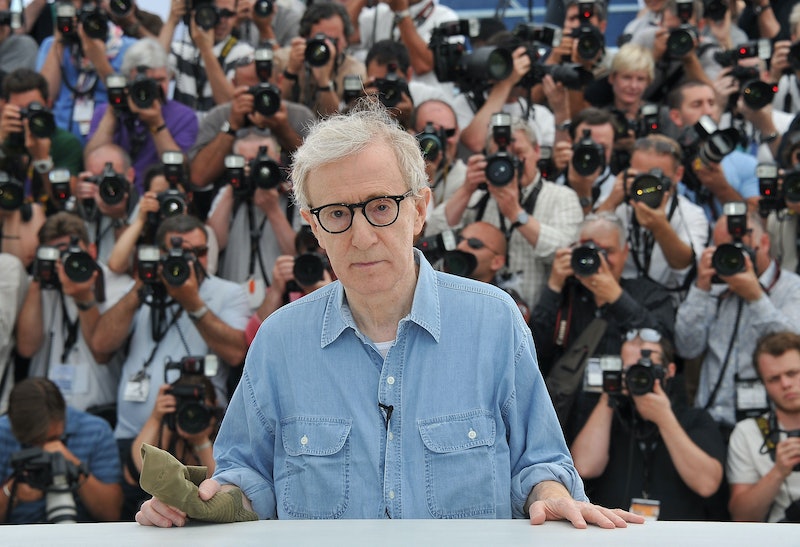 Almost one year ago, at the 2014 Golden Globes, Woody Allen was given the Cecil B. DeMille Lifetime Achievement Award. The director skipped out on the tribute and awards ceremony, since he’s notoriously press shy and hates award shows, but that was not the most interesting part of that news story. No, the interesting part came when Ronan and Mia Farrow reacted to Allen's tribute with tweets expressing their disgust that the Award could go to a man who had molested a 7 year old girl. Then, on February 1, 2014, Dylan Farrow accused Allen of molesting her as a child in an op-ed piece for the New York Times that would cause a media firestorm not unlike the one currently being faced by comedian Bill Cosby.

And then the storm ended. You see, this was far from the first time that the Farrow family had made these accusations, but the world seemed content to forget about the issue once the court ruled the evidence of any such abuse "inconclusive." Now, in January 2015, Allen is creating an Amazon TV series, his first creation for television, and is being praised once more for his creative vision and lucrative career. And that kind of thing can be painful to read when you remember the attitude toward him at this time last year. Should Allen be receiving a television show when he did not receive any sort of punishment for his alleged crime? Or has he suffered enough backlash over an allegation that has never legally been proven true?

When you check out a timeline of Allen's career and image between the time of Farrow's brave confession and now, I would say the answer to the latter question is no.

The #IBelieveDylanFarrow hashtag begins gathering steam on Twitter as supporters lambast victim shaming and the trivialization of her message by the media and by Allen's fans. One person tweets, "Rapists love it when we silence victims for them."

Sony Pictures Classics, the distributer of Blue Jasmine, speak out in defense of Allen: "We have had a long, productive and rewarding relationship with Mr. Allen. This is a very complicated situation and a tragedy for everyone involved. Mr. Allen has never been charged in relationship to any of this, and therefore deserves our presumption of innocence."

Barbara Walters stirs up controversy on and off The View when she defends Allen as an upstanding person and father, to the surprise of her co-stars who point out that Dylan "has noting to gain by coming out and saying this" and that many people accused of sex-related crimes "are often described as ‘the most wonderful person'."

Moses Farrow defends Allen from Dylan's allegations, stating, "My mother drummed it into me to hate my father for tearing apart the family and sexually molesting my sister. And I hated him for her for years. I see now that this was a vengeful way to pay him back for falling in love with Soon-Yi."

Dylan gives a new interview to People, during which she opens up about how difficult it was for her pen her original letter. "People are saying that I am not actually remembering what I remember. People are saying that my 'evil mother' brainwashed me because they refuse to believe that my sick, evil father would ever molest me, because we live in this society where victim blaming and inexcusable behavior – this taboo against shaming the famous at the expense of their victims – is accepted and excused."

A follow-up opinion piece from Allen is published in the New York Times. In it, the director lays the blame for the scandal on his ex-wife, Mia, for poisoning Dylan's mind. "Of course, I did not molest Dylan. I loved her and hope one day she will grasp how she has been cheated out of having a loving father and exploited by a mother more interested in her own festering anger than her daughter’s well-being."

Dylan responds to Allen's op-ed piece with a letter sent to media outlets, beginning with the powerful statement, "Once again, Woody Allen is attacking me and my family in an effort to discredit and silence me - but nothing he says or writes can change the truth."

In Buenos Aires, Argentina, artist Hugo Echarri opens a "We Love Woody Allen So Much" exhibition to celebrate the life and work of the titular director.

An essay published in The Washington Post sparks a debate about whether or not an artist with this kind of scandal should still merit reward for their work: "'Separate the art from the artist' may be the closest secular analog we have to 'Hate the sin, love the sinner.' And both phrases invite understandable skepticism. How can we possibly tease apart individuals and their actions, and doesn’t doing so mean that we’re failing our own moral imperative to hold people to account?"

According to Page Six, Allen is heckled at a New York theater over the sexual abuse scandal, when an audience member screams out, "I think he did it!" The director seems entirely unfazed by the negative attention, according to a witness.

New York Times critic Janet Maslin claims that Farrow is just looking for attention with her op-ed, and that her piece was written out of a desire to get the same kind of press attention that her brother got "by suggesting that his real father might have been Frank Sinatra."

Although Allen's Blue Jasmine lost the award for Best Screenplay at the Academy Awards, Cate Blanchett thanks Allen in her acceptance speech for Best Actress in the same film. According to the New York Daily News, the audience responds with "muted applause." Allen himself does not attend the ceremony.

Allen stars in a film called Fading Gigolo, in which he portrays what The Daily Beast calls a "creepy pimp." The film opens to mixed reviews, but becomes the second highest opening weekend gross for an indie movie at the time.

Variety reports that Emma Stone and Joaquin Phoenix will star in Allen's next film, Magic in the Moonlight. It is Allen's first film since the sex abuse scandal broke out.

In an interview with The Wrap, Allen refers to journalists as heroes — but waves away any discussion of whether or not he still feels that way despite the media controversy he's been buried in the last few months.

In an interview with the New York Times, Allen dismisses the idea that the child molestation controversy might affect the amount of people who see his upcoming film, Magic in the Moonlight: "No thoughts like that occur to me. They only occur to you guys. I don’t think anyone has ever not come to a film of mine that they thought they would enjoy. Nothing keeps them away if they think they’ll enjoy the film. And if they don’t think they’ll enjoy the film, nothing we can do ever brings them in.”

In a cover interview with Vanity Fair, aside from discussing her recent nude picture leak, media darling Jennifer Lawrence spares a moment to discuss how much she worships Allen.

Amazon's official statement on Allen's new TV series is, "Woody Allen is a visionary creator who has made some of the greatest films of all-time, and it’s an honor to be working with him on his first television series." While Allen's name cannot completely escape the sexual abuse controversy that has, and still does, inevitably come up whenever he is mentioned, that black spot on his reputation has had little to no impact on his career. Allen has not been held accountable for his actions or given any statement on the scandal beyond his original op-ed piece from February 2014 — and yet he has not only released a movie starring the widely beloved Emma Stone, but has also secured a TV series deal with the progressive Amazon.

Meanwhile, Farrow has been, it seems, adequately and disappointingly silenced since the controversy has died down. In fact, she has not made headlines at all since her confession, while her alleged abuser continues to build a career that people support with opportunities like this. Does this, then, mean it is inevitable that the public will forgive, or forget, any crime once sufficient time has passed and the media flurry has died down? Or is the fact that you can't mention Allen without the scandal being brought up by someone punishment enough? Given this timeline, the answer seems sadly clear.