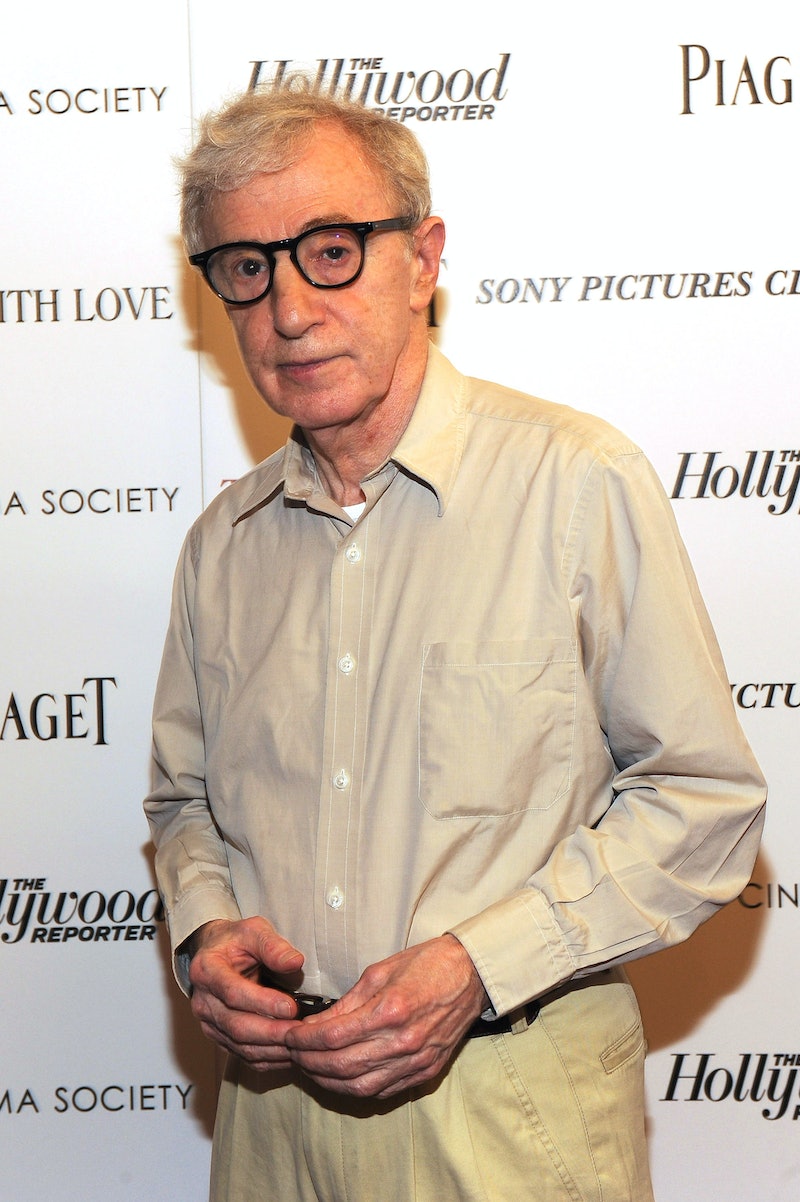 Just two days after winning two Golden Globes for its hit show Transparent , Amazon has announced its next move — and it's not one anybody saw coming. On Tuesday morning, the website revealed that it has hired Woody Allen to write and direct an upcoming TV series, a half-hour long show. Currently untitled, the series already been given a full season order.

Amazon Studios Vice President Roy Price had nothing but praise for his newest hire in his official statement. “Woody Allen is a visionary creator who has made some of the greatest films of all-time, and it’s an honor to be working with him on his first television series,” said Price. “From Annie Hall to Blue Jasmine, Woody has been at the creative forefront of American cinema, and we couldn’t be more excited to premiere his first TV series.”

In a separate statement, Allen spoke of his new project — his first foray into TV — with slightly less enthusiasm, falling back on his famed self-deprecating humor. “I don’t know how I got into this,” he said. “I have no ideas, and I’m not sure where to begin. My guess is that Roy Price will regret this.”

Unfortunately, I have to agree; Allen, as many will recall, has been accused of sexually abusing his adopted daughter, Dylan Farrow, when she was a child. The charges were made public in the '90s, but largely forgotten about until Farrow wrote an op-ed in February 2014 for The New York Times that detailed the alleged abuse. The letter, and the highly-publicized back-and-forth that followed, tainted the director's image and started a major conversation about reconciling an artist's flawed personality with the beloved art he/she produces. Allen's reputation as an iconic director was tarnished, and while many still flocked to see his film in theaters, his public persona was met with far more contempt.

Which is why I'm so surprised that Amazon agreed to make his show. While it's true that many networks and actors might still want to work with the always-profitable Allen despite the accusations, I find it shocking that Amazon is on the list. This is the site, after all, that gave us one of the most progressive, groundbreaking shows on TV, a series that did for the oppressed what many of the "real" networks could or would not. It gave a voice to a community largely without one, at least on such a widely-seen scale; as Transparent star Jeffrey Tambor noted in his Best Actor Golden Globes acceptance speech, being a part of the show means being "a part of the change."

So it's hugely disappointing to hear that the same website responsible for such important progress has taken such a major step back by supporting the work of an alleged child abuser. Yes, Allen has never been officially charged with the crimes, and no, I don't expect every actor or studio in Hollywood to denounce his name — although I do wish they would. Yet it's still upsetting when Amazon, currently one of the most progressive forces in TV, is the one responsible for giving Allen more support, especially in a platform this important.

Television today has enormous influence, perhaps more so than film; it's TV shows, not movies, that are embracing diversity and addressing controversial issues with such necessary and passionate frequency. To let Allen — a filmmaker whose only "progressive" action is usually casting an actress over the age of 25 — be a part of this trend is a setback for both Amazon and the industry itself.

The details of Allen's show have yet to be announced. Perhaps he'll surprise us all and create a series that, like Transparent, is enlightened in its topics and conversations. Yet, while that would certainly be nice, it wouldn't excuse the fact that Allen shouldn't have been given the platform in the first place, especially not by Amazon. Two days ago, I couldn't have been more thrilled with the website and its progress; today, however, I couldn't be more disappointed.

More like this
20 Photos Of "Beefy" Jeremy Allen White To Tempt You To Watch 'The Bear'
By Radhika Menon
Lily Allen Was “Quite Emosh” After Performing Sober At Glastonbury Festival
By Stephanie Topacio Long
Hayden Panettiere Admits "Addiction" To Alcohol & Opioids Before Going Sober
By Jake Viswanath
Is 'Stranger Things' Fan-Favorite Joseph Quinn Dating Anyone? Doja Cat Volunteers
By Grace Wehniainen
Get Even More From Bustle — Sign Up For The Newsletter