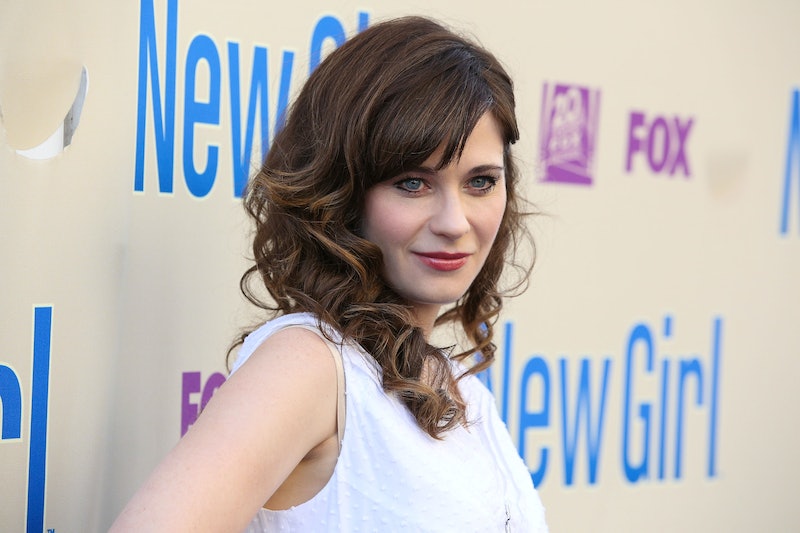 In case you missed the best news ever, Zooey Deschanel is pregnant — and I couldn't be more thrilled. I always thought Blue Ivy would be my favorite celebrity baby, but now that Deschanel's going to be a mom, it's a total game changer. News broke Tuesday that Deschanel and boyfriend Jacob Pechenik are expecting their first child, and if you aren't excited about them bringing a baby into this world with huge blue eyes and glorious straight bangs, you don't have a heart. But anyway, if you're a little confused about the baby daddy situation, I totally understand. Let me guess: You're thinking, "Wait, isn't she married to that Death Cab for Cutie Guy?" She was, but not anymore. And now is a good a time as any to review Zooey Deschanel's dating history.

Warning: It's kind of boring, because Deschanel doesn't seem to be into having too many high-profile celebrity relationships and tends to stay in relationships long-term. Not that I have time to worry about this, since I'm too busy drawing up plans for Deschanel's future nursery and baby shower — and I'm guessing she's going to want to leave a few of these guys off her guest lists.

Here's everybody Deschanel has dated in the past 15 years... publicly, anyway.

Schwartzman was Deschanel's first "real" boyfriend, and they began dating when they were both 19. It definitely doesn't sound like he's pining over his ex, though — in 2009, he married Brady Cunningham and in June 2014, they welcomed their second child.

It's rumored that Deschanel had a thing with Madden, from Maroon 5, sometime after breaking up with Schwartzman, as mentioned in Rolling Stone's announcement of her engagement to Ben Gibbard. However, that's the only evidence I can find of their supposed relationship, so take this one with a grain of salt.

Deschanel's romance with Death Cab for Cutie frontman Ben Gibbard was a whirlwind. They began dating in 2008 and got engaged that same year after nearly a year together. In 2009, they got married, and in 2011, they divorced. The records of their split were made public when their divorce was finalized in 2012, and they basically proved that Deschanel is both rich and fiscally responsible.

In 2012, Deschanel got back on the saddle after her divorce and dated Dear John and We Are Marshall screenwriter Jamie Linden. They broke up in August 2014 after two years of dating.

This brings us to Deschanel's current beau, Jacob Pechenik. They first made their debut as a couple on the red carpet at the 2014 Emmys shortly after her breakup with Linden in August. And they lived happily ever after, baby and all.