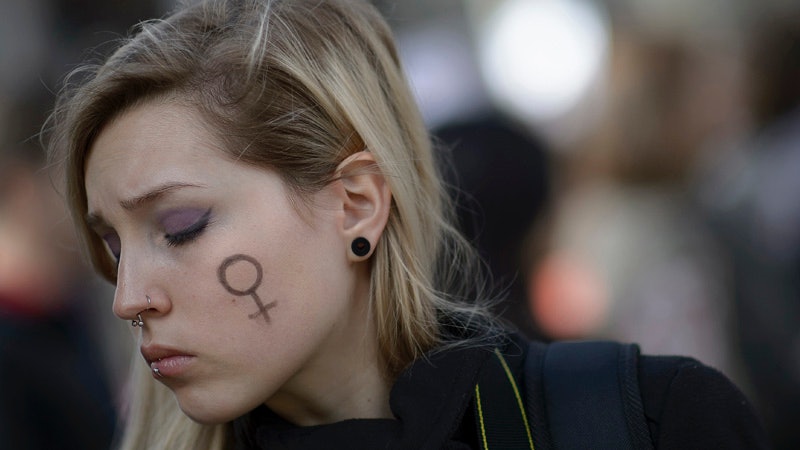 Congress made its agenda for 2015 clear when Republican lawmakers opened the session with yet another abortion restriction. But what do the states have in store for us? In 2014 alone, 335 abortion restrictions were introduced at the state level, according to the latest report from the Guttmacher Institute. Considering the hostile anti-abortion climate spreading rapidly throughout the United States, you can expect 2015 to be just as busy — and potentially dangerous.

But abortion access is not just threatened in the statehouses. The courts have played an integral role in shaping abortion access since the 1973 Roe v. Wade decision, and judges will once again be placed in the spotlight in 2015. For many states, their doctors and clinics are dependent on several pending, federal court challenges, which could close dozens of clinics, make it harder for a women to receive an abortion after the first trimester, or eliminate access in a state altogether.

Here's a look at how the landscape of abortion access in America may change over the next year...

All eyes are on the Lone Star State. Texas' infamous HB2, made famous by Wendy Davis and her bubblegum pink sneakers, recently headed back to the U.S. Court of Appeals for the Fifth Circuit, which will determine whether or not the law's ambulatory surgical center (ASC) provision is unconstitutional. The provision mandates that all abortion facilities in the state must be an ASC, no matter the stage of pregnancy (typically, these specially designed medical centers are only used for abortions performed around the 16th week of pregnancy or later).

In October, the 5th Circuit stayed a federal district court ruling that permanently blocked the ASC provision from being enforced, but the Supreme Court intervened two weeks later. This back-and-forth between the courts has been ongoing since Texas passed the controversial law in late 2013.

What Texas could look like in 2016: If HB2 is enforced, Texas would be left with just eight abortion clinics for the entire state. West and South Texas would be the hardest-hit areas, with women in the Rio Grande Valley, which borders Mexico, the most impacted. Currently, just one clinic, Whole Women's Health in McAllen, remains open in the Rio Grande region; if it were to close, women in the area would have to drive around 250 miles north to San Antonio for the nearest clinic.

Similarly, El Paso only has one clinic, which would be shuttered if the provision went into effect. However, to alleviate the hundreds of miles of travel for West Texas women, Whole Women's Health opened a clinic in Las Cruces, New Mexico, less than 20 miles from El Paso.

To understand how dramatically abortion access has changed in Texas over the last year, Fund Texas Choice explains:

On November 1, 2013, we went from 13 to 7 cities that provide abortions. Those were: Austin, Beaumont, Corpus Christi, Dallas, El Paso, Houston, and San Antonio. (Ft. Worth was later reinstated.) Since October 3, the only 5 cities that provide abortions now are Austin, Dallas, Ft. Worth, San Antonio, and Houston.On October 3, 2014, the second round of HB2 restrictions were enforced, leaving 8 clinics. The only cities that have clinics now are Austin, San Antonio, Dallas, Ft. Worth, and Houston.

In 2013, North Dakota passed a fetal heartbeat law, which is exactly what it sounds like: abortion is banned after a fetal heartbeat is detected, which can be as early as the sixth week of pregnancy. A federal judge overturned the law in April 2014, ruling:

But now, the law is being challenged — again. On Jan. 13, 8th U.S. Circuit Court of Appeals began hearing oral arguments on why the state should reimpose the over-reaching law.

What North Dakota could look like in 2016: A fetal heartbeat law is blatantly unconstitutional, but that hasn't stopped states from trying to pass it. The law effectively bans most abortions, as women may not even know they're pregnant until after the sixth week. For a majority of North Dakota women, it would be too late to receive an abortion by the time they took a pregnancy test.

North Dakota has just one clinic: Red River Women's Clinic in Fargo. North Dakota women who need an abortion after the sixth week of pregnancy would have to travel about 250 miles south to Sioux Falls, South Dakota; about 235 miles to Minneapolis; or nearly 500 miles to Des Moines, Iowa. Of course, there's always a plane ride — or eight-hour drive — to the Planned Parenthood in Billings, Montana.

In early January, the 8th Circuit also began hearing arguments on Arkansas' 12-week abortion ban, which was initially vetoed by former Democratic Gov. Mike Beebe. The state's anti-abortion lawmakers, however, overruled it — intent on outlawing abortion as much as possible in the Natural State.

Like North Dakota's fetal heartbeat law, a federal judge struck down Arkansas' stringent abortion ban in 2014. "The state presents no evidence that a fetus can live outside the mother's womb at twelve weeks," Judge Susan Webber Wright wrote in her decision.

What Arkansas could look like in 2016: Arkansas has just three abortion clinics — and it's surrounded by states with only a handful of clinics each. If the 12-week abortion ban was instated, women who need an abortion would have to travel to Memphis, Tennessee.

If Texas may be the Lone Star State, then Mississippi is the Lone Abortion Clinic State — and proud of it. Jackson Women’s Health Organization, located in the heart of Mississippi, became the state's last abortion provider in 2002. Since 2012, lawmakers have been determined to run it out of business — and they almost succeeded with a provision mandating physicians at the clinic to have admitting privileges at a hospital within a 30-mile radius. The doctors were denied by every hospital in the area.

For more than two years, Jackson Women's Health Organization has been open with the help of federal injunctions. The law was previously struck down by the 5th Circuit — which also refused to reconsider the case in November 2014 — but still remains tied up in litigation.What Mississippi could look like in 2016: Without a federal injunction in place, Mississippi's sole abortion clinic would be forced to close, making Mississippi the first "abortion-free" state in the nation (though it's unlikely a judge will let that happen). Abortion access is already scarce in the Deep South, with clinics in neighboring Alabama and Louisiana also tied up in legal challenges. As of October 2014, Alabama had just five clinics left, including one in Tuscaloosa, near the Mississippi border. According to the Associated Press, the Tuscaloosa clinic is the state's busiest, presumably because it receives the most out-of-state patients. Images: Getty Images(2), Fund Texas Choice, Google screenshot