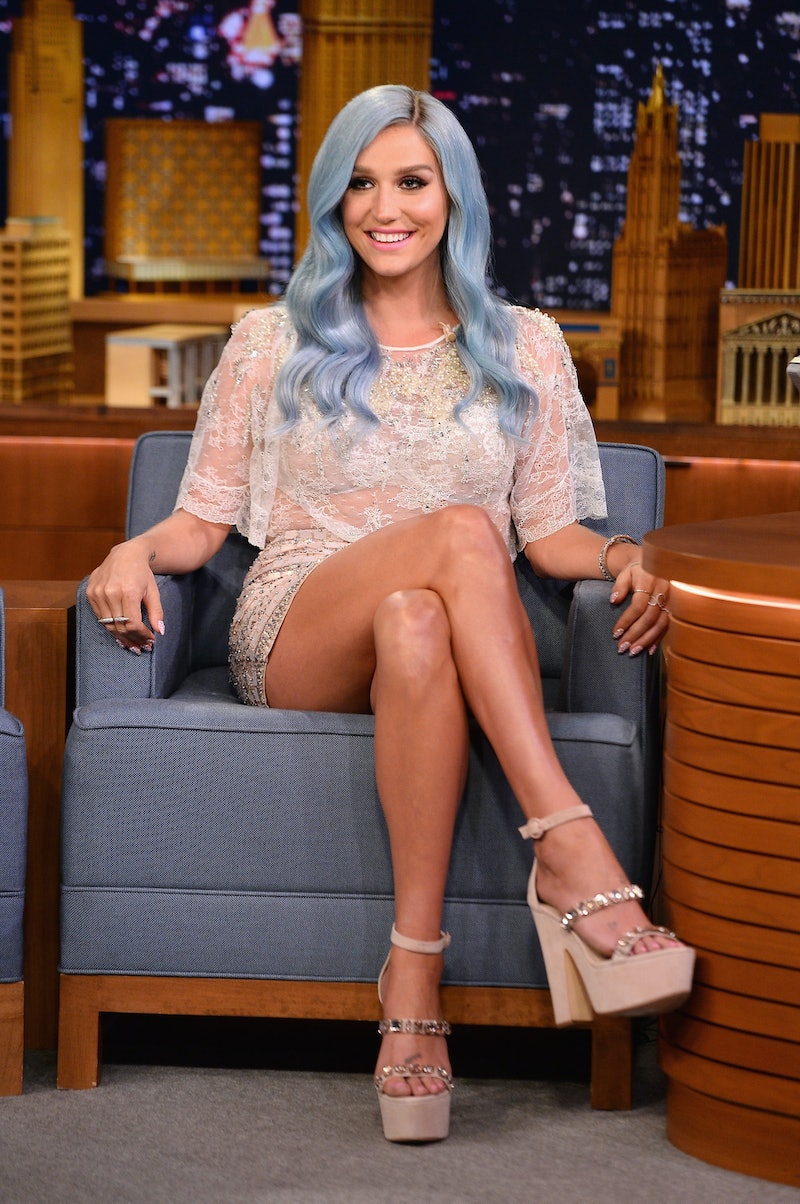 I was 12 when I dyed my hair black, and I was 14 when I realized I was depressed. I went to see the school psychiatrist because I was an absolute martyr and it got me out of half an hour of lessons each week. She was the typical cliché school therapist who urged me to explain my teenage angst in lots of detail and then replied in basic metaphors about my gothic appearance. The remark that stuck with me the most was about my hair — she asked me my what my natural color was (which she should have deduced from my poorly attended-to roots), and I replied "dirty blonde" because that sounded much edgier than "mousey brown." She then proceeded to give me an inspiring speech on this idea that one day I wouldn't have black hair anymore, because black hair wouldn't be me anymore — and she made a cheesy reference to the "blondes have more fun" favorite phrase of peroxide princesses.

I’d like to pretend this all left a deep, resounding emotional impact within me, but when I eventually bleached my hair white-blonde, it wasn't because I'd undergone some vast, psychological change. Rather, it was because I saw someone on Tumblr with that hair color, and nobody from my school had done it yet. Our high school had banned "unnatural" hair colors, so a blue rinse was the easiest "fuck you" I could give them without actually causing any trouble.

I had to go into my old MySpace (yes, it still exists) to find this picture — and this was literally the best one. I'm so sorry to everyone who knew me at age 13.

A really fun game to play on Facebook is going through people's profile pictures, and working out exactly when they got a Tumblr account — this is my moment.

I never made the connection that I still make the connection of my hair color with my personality until this year, when making decisions for my roundup of favorite selfies on Tumblr — a tradition maintained by many users of the blogging platform. But since going to university, I’ve managed to dye my hair every color I could think of, as well as a few accidental mixes, culminating in a rainbow head of hair this year.

In December, I dyed my hair brown, didn’t wear makeup for two weeks, and cried daily about my schoolwork, my personal life, and even Christmas advertisements (but seriously, that John Lewis penguin commercial was emotional). I realized that I hadn’t smiled for, like, a week, and was acting like a selfish bitch purely because I had dyed my hair brown and was subconsciously personifying a "brown haired" version of myself — someone I hadn’t been since I was 16.

Since realizing this realization, I’ve come to terms with the fact that hair color has literally nothing to do with my emotions. When I was a kid, I always thought that it rained because I was sad — until I understood that that was the plot to Men in Black 2, not the story of my life. But sometimes our inner workings make us follow strange rules that we simply make up for ourselves one day. For instance, in my last year of middle school, someone told me it was a "fashion don’t" to wear brown and black together. And to this day, I still can’t do it.

And there's the aforementioned rainbow.

I think the stupidity in these rules doesn’t come from us following them, but instead from us continuing to do so even after said stupidity is revealed. But sometimes that stupidity still refuses to feel stupid — because it just feels weirdly comforting knowing that your outfit fits a rule that 11-year-olds everywhere probably still spread amongst each other. Maybe it's like you're making a younger version of yourself proud.

Even before 2014 ended, I bleached my hair twice and cut it into the shortest bob that I thought my chubby little face could get away with. I felt so much more confident immediately, which is weird because I’d always avoided short hair for body-image reasons (partly because I didn’t think fat girls could pull off short hair — or rather that this particular fat girl couldn’t pull off short hair — and partly because I couldn’t handle the fact that people would stop calling me a mermaid).

Thankfully — a kind of selfish thankfully, that is — these strange stigmas we carry about hair aren’t solely exclusive to me. When I first dyed my hair a "crazy" color, my best friend from my tiny hometown couldn’t handle it: "Don’t people stare at you in the street?" No, they didn't actually. I’d moved to Manchester — the capital of the English North — where a stroll into the Northern Quarter quickly dispels any sense of an individual self. Through the entire two years that I constantly kept changing my hair color, I always had people congratulating me on it — wishing they were "brave" enough to pull it off themselves. I always think to myself, though, Nobody has naturally green hair, so it can’t naturally suit some people over others! Subsequently, I’d tell anyone to just go for it.

My blasé nature toward unnatural colors seems like the opposite of what other people feel. Where I’d be much more comfortable with long blue hair over a brown bob, most would opt for the latter. I think this epitomizes the ridiculousness that is having any conception of self worth founded solely in an aspect of ourselves that is as easy to change as our hair. If the choice is different depending on the personality, then the rules are different for each person. And if a rule is different for each person, then it can’t be a "real" rule, can it? And although I crumbled under the pressure I felt from brown hair, I compromised with a risky cut that’s pushed me one step forward in my self-love mission.

I wish I could tell my 14-year-old self that the black hair looked perfect on me, because it represented me at the time. I wish I could tell myself a month ago to stop whining about being a greasy-haired brunette because it really suited the whole my-life-is-falling-apart vibe I had for a fortnight in December. I’m telling myself now that my preconceptions about hair were pointless, because the short hair I avoided on some stupid social anxiety rule has turned into my favorite haircut yet. Maybe one day I’ll suit being a brunette, but that feels like a "maybe one day" where I’ll have a completely different personality, and become a hermit superhero who doesn’t adhere to subconscious social rules.

More like this
The Secret To Taylor Swift’s Fringe, According To The Experts
By Orla Pentelow
Why Sarah Jessica Parker Wanted Fans To Stop Calling Her Hair Choice “Brave”
By Brad Witter
How To Protect Your Scalp From The Sun, According To Derms
By Paris Giles
15 Summer Hairstyle Trends That'll Inspire Your Next Chop
By Paris Giles
Get Even More From Bustle — Sign Up For The Newsletter