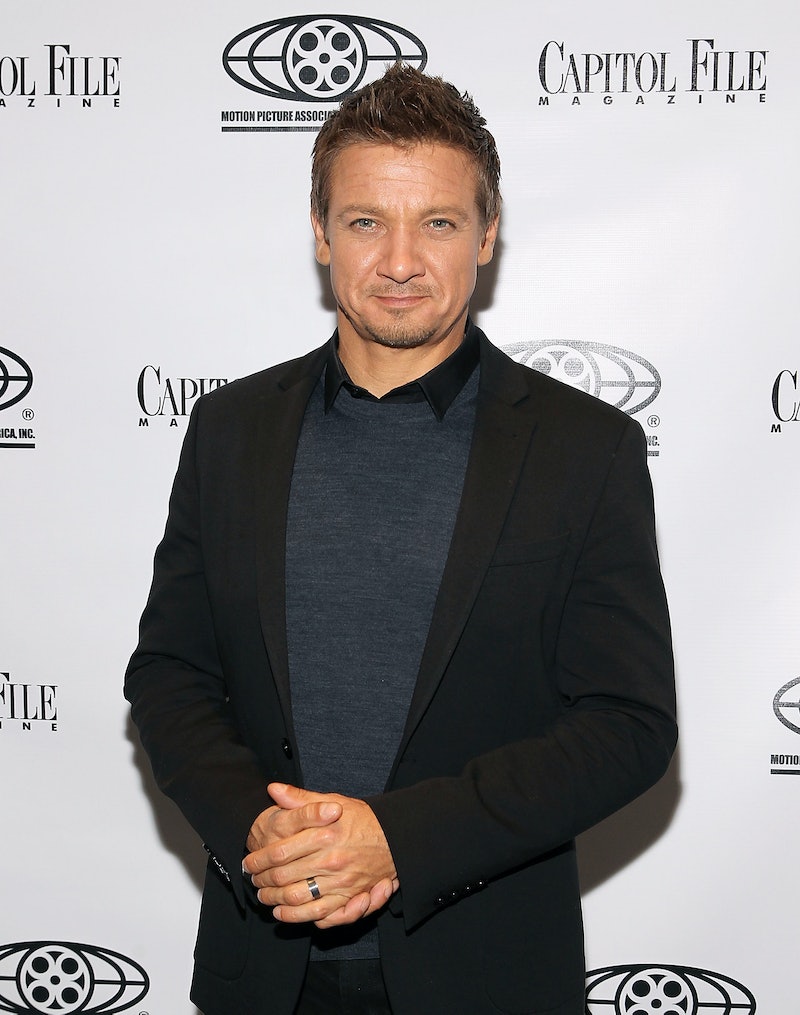 The 2015 Golden Globes awards brought a lot of funny moments, as always, and the awards show also showcased a lot of feminism. (Yay!) However, some not-so-amusing moments also occurred like when Jeremy Renner pointed out Jennifer Lopez's "golden globes" while presenting an award. For those not familiar with this cringe-worthy moment, as Lopez was getting ready to open the envelope, she asked Renner, "You want me to do it?" Then she added, "I have the nails." In turn, Renner responded, "You've got the globes, too." It got quite the reaction, including a laugh from Lopez, but many people were appalled by his remark. Now, Renner is defending his joke.

Thanks to this tech-friendly and social media-filled world, Renner didn't release a statement to the press, but took to his Twitter to comment on the situation. No, he didn't apologize, but did say people need to relax and not take things so seriously. Also, he said he couldn't help himself when the opportunity presented itself. His entire tweet reads, "A reminder not to take this s--t so serious. Thanks Jennifer -- You're a gem.x #goldenglobes #hadtosayit #jlo."

Do I agree with Renner that nowadays people sometimes take things too seriously? Yes. However, regarding this particular remark, if I were Lopez standing up on that stage and Renner said that to me, I'd probably feel somewhat embarrassed, irritated, and awkward. I'd also be like, "Why do you have to point out my boobs? Yes, I have them, but I also have a lot of other great features, like the fact that I'm smart, talented, and successful." The fact is that Renner's joke is degrading.

With all of that said, and now that Renner's released his opinion, I want to hear from Lopez. Did she really find Renner's words funny or was she just caught off guard and laughing as a defense mechanism? Is she upset with him for pointing out her "golden globes?" Could she really care less? Personally, I don't think Renner meant to insult Lopez or degrade her, but it definitely came off that way. Sometimes it's better to think before you speak — "had to say it" isn't an excuse — and to keep certain things to yourself.