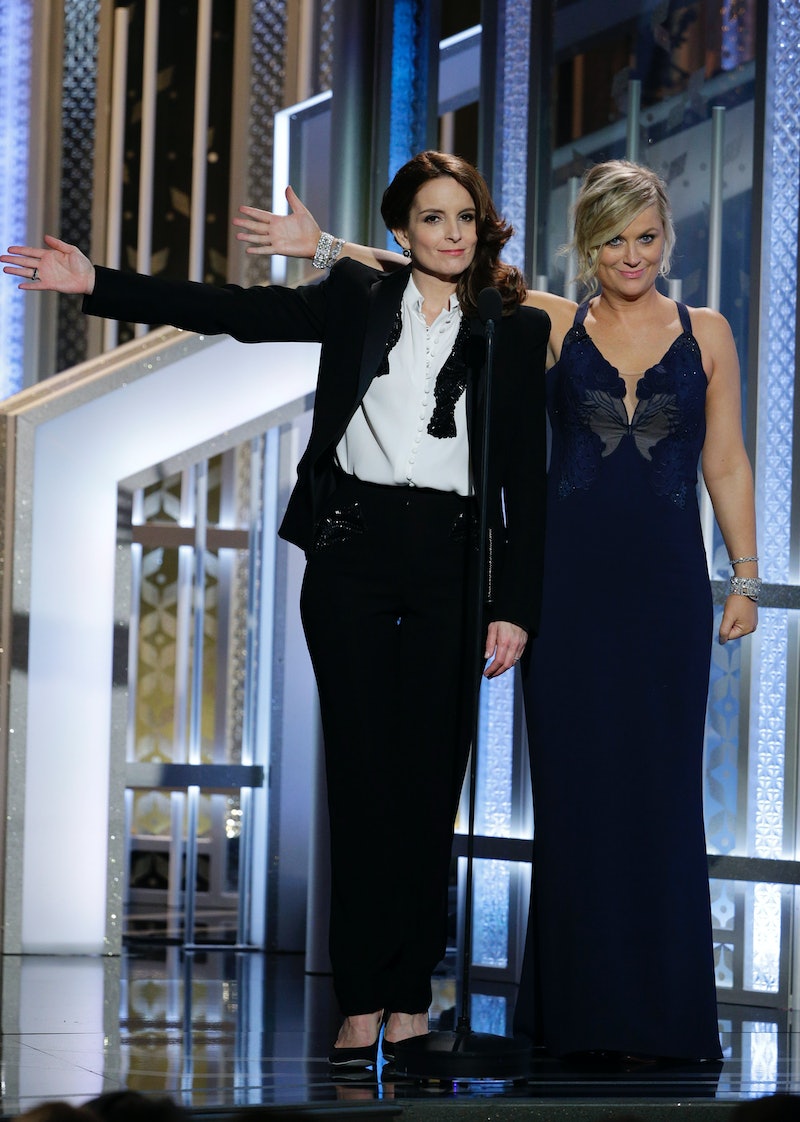 For awhile there, it seemed like the 2015 Golden Globe Awards were looking a lot like many awards shows past: a grating, overlong show containing a few female-focused wins here or there, but mostly filled with male-oriented and frequently sexist moments. There was the Jeremy Renner comment, in which he complimented co-presenter Jennifer Lopez's "golden globes," and the Kevin Hart debacle, in which the comedian uncomfortably "bantered" with Salma Hayek by calling her aggressive and making the audience applaud her for her good looks. But around halfway through the show, things started turning towards a pretty feminist 2015 Golden Globes.

Hosts Tina Fey and Amy Poehler got in a few great jokes about Bill Cosby's accusations and George Clooney's marriage; Transparent, a show about a transgender woman, won Best TV Comedy; Amy Adams' acceptance speech for Big Eyes referenced great female role models and her love of complex characters. And when the show finally came to an end a few hours later, the theme of the night was clear: despite a few flubs, the 2015 Golden Globe Awards were a refreshing and celebratory show of feminism.

Let's start with the hosts. Although Fey and Poehler were disappointingly absent from most of the night, their opening monologue contained its fair share of feminist zingers. There was the line about ageism (“Boyhood proves there’s still great movies for women over 40 as long as you’re cast when you’re still under 40"), the necessary listing of Amal Clooney's many achievements, and, most memorably, the shout-out to the rape allegations against Bill Cosby. In just a few short minutes, the hosts managed to pinpoint some of Hollywood's biggest problems, causing the show's audience members to both clap in appreciation and cringe in much-needed recognition.

Then there was TV. Accepting her award for Supporting Actress, Downton Abbey star Joanne Froggart paid tribute to women who, like her character on the show, have endured sexual assault. "I heard you," she said, "and I hope saying this so publicly means in some way you feel the world hears you." Soon after, Jane the Virgin 's Gina Rodriguez, a Latina, took the stage to accept her honor and, in doing so, called her sisters her role models and praised "a culture who wants to see themselves as heroes." Winning for her role in An Honorable Woman, Maggie Gyllenhaal spoke passionately about the "wealth of roles for actual women in television and in film," women who are "sometimes powerful and sometimes not, sometimes sexy, sometimes not, sometimes honorable, sometimes not... that’s what I think is revolutionary and evolutionary and it’s what’s turning me on."

And then there was the big TV win for the night, Amazon's Transparent , Jill Soloway's show about a transgender woman. Speaking for the team, Soloway paid tribute to the trans community, mentioning both her own father and the late teen Leelah Alcorn. Later, star Jeffrey Tambor thanked the community as well, for inspiring his character and "letting us be a part of the change.”

Finally, there were the movies. Best Actress in a Musical or Comedy winner Amy Adams thanked a crowd full of female role models; Patricia Arquette accepted an award for playing a wonderfully complicated single mom in Boyhood; Julianne Moore edged closer to an Oscar when she won the Globe for playing a middle-aged woman (a type, she said, no one wanted to see on-screen) suffering from early onset Alzheimer's in Still Alice. Hardly a female winner took the stage, it seemed, without acknowledging both the problems facing women in Hollywood and the strides she and her fellow ladies were making to change the game for feminists in generations to come.

And it wasn't just the winners, either; several presenters, including Grace and Frankie's Jane Fonda and Lily Tomlin, made feminism their mission. "It's nice that men at last are getting the recognition they deserve for comedy," said Tomlin. "Finally, we can put at rest that negative stereotype that men just aren't funny."

So yes, there was some sexism. And yes, it'll probably still be a long time before we can get through an awards show without a male presenter referencing his co-star's breasts. But while the Golden Globes may be considered meaningless, the feminism present in its every aspect, from its nominees to its speeches to its jokes, is anything but. Let's only hope the Oscars follow suit.

More like this
Sandra Bullock, Girlboss Extraordinaire
By Matt Harkins & Viviana Olen
Amanda Seyfried Reflects On 'Mean Girls' & "Gross" Remarks That Men Made After It
By Jake Viswanath
The 'Hocus Pocus' Sequel Finally Has A Release Date & It Makes Total Sense
By Shannon Barbour and Radhika Menon
Spice Girls’ Net Worth: The Richest Member Is Wealthier Than The Rest Combined
By Hugh McIntyre
Get Even More From Bustle — Sign Up For The Newsletter