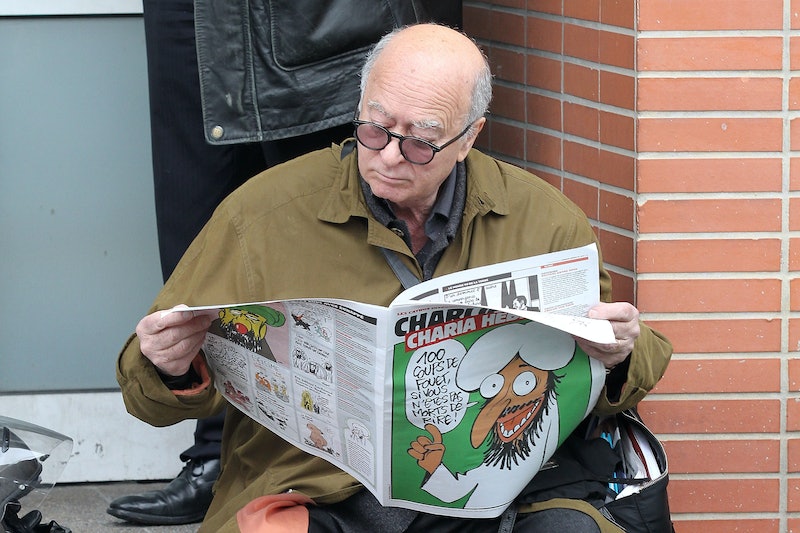 On schedule, a new Charlie Hebdo issue will be published Wednesday, its first after gunmen killed 10 journalists and two police officers in a horrifying terror attack on the satirical magazine. As the magazine continues to confront attempts to paralyze its efforts to criticize authority and extremism, the one question on everyone's minds is: What exactly will be in Charlie Hebdo's next issue?

Not much is known yet of its content, but what we have seen so far is its controversial cover, one depicting a tearful Prophet Muhammad brandishing the sign "Je Suis Charlie" beneath the heading "All is forgiven." The designer of the cover, Renald Luzier, said of the drawing at a Tuesday press conference in Paris, as he teared up:

We feel that we have to forgive what happened. I think those who have been killed, if they would have been able to have a coffee today with the terrorists and just talk to ask them why have they done this … We feel at the Charlie Hebdo team that we need to forgive.

As for what's inside the new issue, BBC reporter Fergal Keane, who was given a copy, tweeted about what to expect: parodies of religious figures and organizations while still defending its right to offend, which, really, perfectly sums up Charlie Hebdo's purpose of challenging taboos and societal boundaries.

This issue, which Gérard Biard, one of its top editors, told The New York Times will be a normal edition, "not a memorial issue," will have three million copies printed instead of its usual 60,000 and will be translated into other languages, as French media rally around the magazine largely unheard of outside of the country before last week's attacks. Among past works published will be those of the journalists slain in the terror attack.

And, characteristically, the magazine has already been criticized for its cover. A conservative online media outlet in Iran blasted the magazine for what it called insulting the prophet, and Egypt's state-sponsored Islamic authority denounced the cover as an "unjustified provocation."

But Charlie Hebdo will go ahead and publish millions of copies anyway, in determined defiance of attempts at silencing their rights.

More like this
How To Fight For Reproductive Rights, Based On How Much Time You Have
By Courtney Young
Twitter Was Saying The Same Thing About Sam Ryder’s Surprising Eurovision Result
By El Hunt
Manchester Arena Attack 5 Year Anniversary
By Ella Glover
Rebekah Vardy & Coleen Rooney’s Trial Has Officially Begun
By Bustle UK
Get Even More From Bustle — Sign Up For The Newsletter