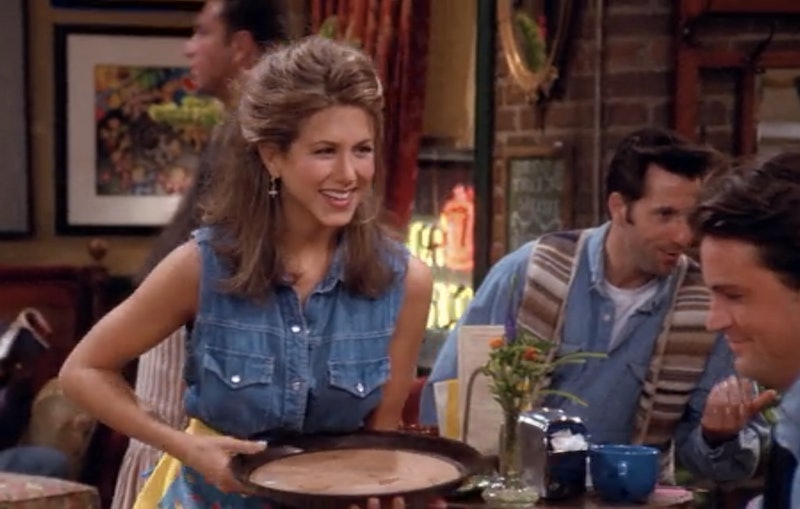 I've recently been re-watching Friends along with every single other person with a Netflix subscription (especially anyone who was a teenager in the mid to late '90s). And I've discovered something that I had never noticed before, despite having seen every episode at least 100 times and being able to recite every episode word-for-word in at least the first six seasons. Here it is: when Rachel starts working at Central Perk, she wears a "uniform." Boom. Is your mind fully blown right now? Because mine certainly was. Because I, Friends addict and "such a Monica," never noticed this incredible detail. Perhaps because it's nearly imperceptible; there's no set uniform, but she always wears a denim top with a black bottom.

I first noticed because I was suddenly paying attention to Rachel's clothes for another Friends post I'm working on (watch this space), and it occurred to me that she was wearing a lot of very similar-looking outfits every time she was working. It was a Joey moment, where at first I didn't make the connection, but then suddenly became bug-eyed, jumped up, and started pointing and grunting. Like when he figures out about Chandler and Monica. It all came together when I noticed all the back ground waitresses were wearing the same thing. The Central Perk uniform. Behold:

For the whole first season, Rachel is always in this make-shift uniform at work:

You see it now, right? In Season 1, Episode 4, Rachel mixes it up and wears BLACK denim:

Starting in Episode 8, she gets more creative with her use of denim on top too, with this weird denim halter over a t-shirt:

Then, from Episode 9 onwards, she really pushes the envelope, sometimes wearing straight-up blue tops rather than denim ones (one of the many reasons Rachel is a "terrible, terrible waitress," maybe?). But it's still adhering to the blue and black Central Perk "uniform":

My favorite though, is in "The One With The Monkey," which is set during the festive season between Christmas and New Year's Eve (ending on New Year's), Rachel goes full Mariah Carey and gets into the swing of things by wearing red to work like a happy little elf:

So there you have it. Rachel wore a uniform to work at Central Perk and you never even noticed. Huh.